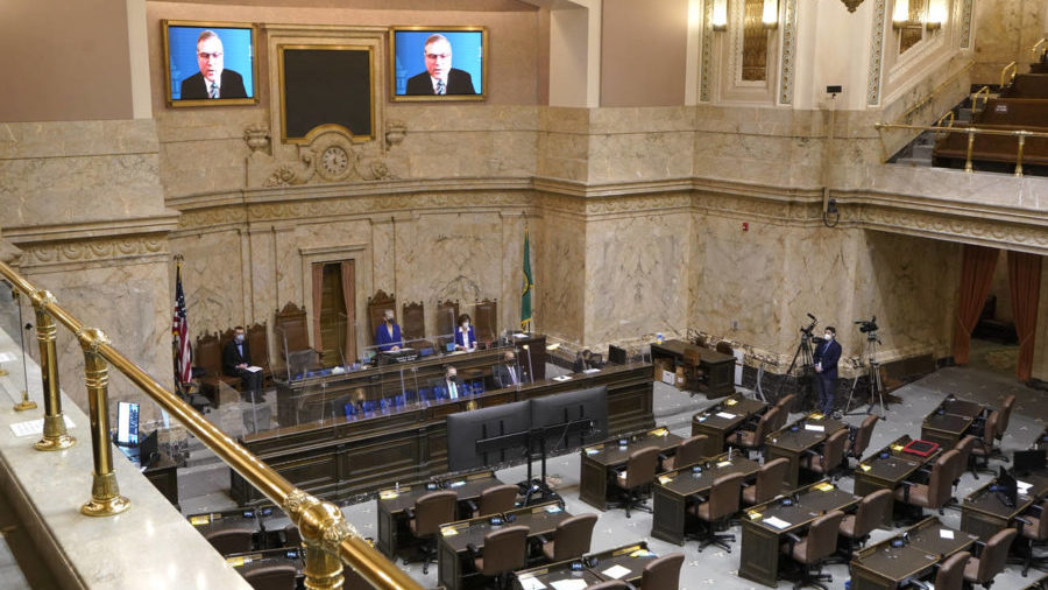 Power-hungry Washington Democrats are doing their level best to change election laws to ensure they hang on to power forever. They laughably claim they’re supporting democracy by punishing political speech and banning elections they lose.

Democrats hope to advance two anti-Democratic laws this session. One of them is flatly unconstitutional. But it’s easier to pass legislation when you have total control in Olympia than it is to work harder and increase turnout.

The bills would ban most odd-year elections where Democrats fear they are at a disadvantage, and send political opponents to jail who question election integrity. Democrats are trying to completely upend our elections.

Washington Democrats don’t fare as well as they’d like in odd-year elections. So, they’re trying to ban them in the name of democracy.

HB 1727 would end general elections in odd years, pushing local elections for mayor, council seats, city attorney, and more to the ballot alongside congressional and legislative races. The same would be done for citizen initiatives.

“If we want a more participating democracy, if we want more voices of all backgrounds, all types making decisions, then we want to put it into a place and a space where people are expecting to vote,” State Rep. Mia Gregerson (D-SeaTac) told the Seattle Times.

The argument is that only around 40% of voters participate in odd-year elections, but over 70% in even-year elections. So rather than encourage more people to vote, Democrats want to just end the elections with lower turnout.

It’s not that Washington Democrats are lazy when it comes to encouraging voters; it’s because the wrong kind of voters have influence in odd-year elections, and rather than lend their voter turnout efforts every year, they want to focus on the bigger elections that keep their grips on the entire state. 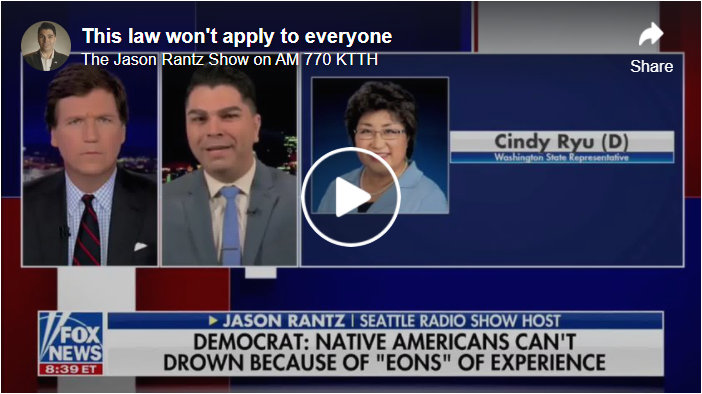 What this is really about

Referendum 88 upheld the voter’s will to ban affirmative action by a slim margin in 2019. That same year, voters supported the Tim Eyman-led initiative to curb car tab fees to no more than $30. Both were opposed by Washington Democrats.

Eyman, a Republican initiative activist, has consistently pushed statewide initiatives through during odd-year elections. They’ve earned the ire of Democrats, which is why, he says, this new legislation is being pushed. He calls it “an attack on the initiative and referendum power.”

“[Gregerson’s] saying during the biggest legislative session, adopting the budget, the citizens will have no right to do an initiative to challenge anything they do. It would be complete unchecked power,” Eyman told the Jason Rantz Show on KTTH.

The exception to the way the public generally votes during odd-year elections? Tax increases and school levies are usually given a thumbs up by voters. That is why HB 1727 does not ban them. Eyman notes the inconsistent argument Democrats use to favor the carveout.

“We don’t mind low turnout elections when it increases government’s power,” he says, mocking Democrats. “But the last thing we want is the citizens to have the right to be able to vote on initiatives in odd years.”

Washington Democrats are also still reeling after their candidates didn’t fare well in the last Seattle election. They lost races for the city’s mayor, city attorney, and one council seat. That was the last straw.

Not hiding the motives

“Odd-year elections suppress the vote of those people we want to hear from,” McGinn claimed to the Seattle Times.

What McGinn means is that too many white homeowners are voting. Democrats aren’t interested in serving them; they just want to use their tax dollars for ideological purposes.

McGinn might have been a disaster of a mayor with barely a loose grip on reality, but he knows what the word “suppress” means. He’s purposefully misusing it in order to frame this issue around equity.

And when you call Democrats out on their anti-democratic stance, they get upset.

Senator T’wina Nobles (D-Tacoma) tweeted a claim that Washingtonians “believe every vote should count.” When I noted Washington Democrats supported a ban on elections, Nobles blocked me. 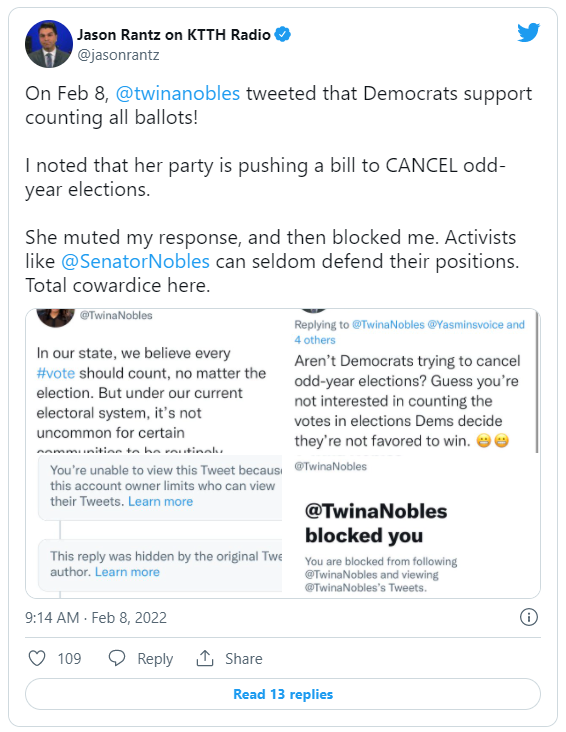 Under SB 5843, introduced by Sen. David Frockt (D-Seattle) at the behest of Governor Jay Inslee, it would be unlawful for a candidate or public official to “knowingly” lie about an election. If convicted, they’d face time in jail and could never run for office again. The bill comes out of virtue signaling from Gov. Inslee on the Jan. 6 riot outside the U.S. Capitol.

This bill was not, however, in response to Democrats’ lies claiming future elections will be stolen (or not even allowed) because their favored legislation, which gives local control of elections to the federal government, failed.

This deeply unconstitutional bill doesn’t protect democracy, it hurts it. Who gets to decide whether or not an election was “stolen?” The Democrats in charge? 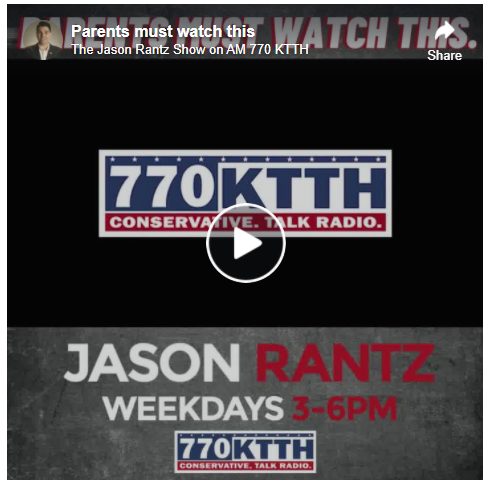 The effects of this bill, should it become law, would be chilling.

A candidate or politician may not speak out after they suspect election integrity issues out of fear that Democrats in charge would use the law to throw them in jail. It would keep good-faith grievances from being aired. And if you actually are cheating the system, this is the law you’d benefit from.

Do some politicians and candidates offer bad-faith talking points about elections? Yes — some even flat-out lie. And while I don’t think there’s been any significant cheating, our free speech rights don’t stop at one’s opinion or delusion. Political speech, even when it’s delivered dishonestly, is supposed to be free from government censorship, unless it falls into a very narrow category of unprotected speech.

If we started throwing people in jail for dishonest political speech, all but about four of the current Democrat caucus would be serving jail time. Maybe that’s why Democrats are only punishing speech about elections.

These two laws aren’t the only ones Democrats are pushing, and they’ve already seen a win.

Democrats already passed HB 1876, which gives the state attorney general the power to add financial disclosure language to the ballot as part of the title for state ballot measures that impact taxes or fees and cause a net change in state revenue.

The additional language, which violates neutrality requirements of ballot titles, cannot be appealed, giving power to the attorney general to help sway voters away from supporting a bill.

This method ensures Republicans have a harder time winning upset races in areas with more Democrat voters — like in Seattle, where this process would have likely meant Republican Ann Davison would not have won in the general election.

Democrats claim Republicans want to steal elections. But Democrats are the only ones changing rules and laws — always in their favor. And we better call this out now before Democrats ban media and voter criticism of their election takeover plot, too.