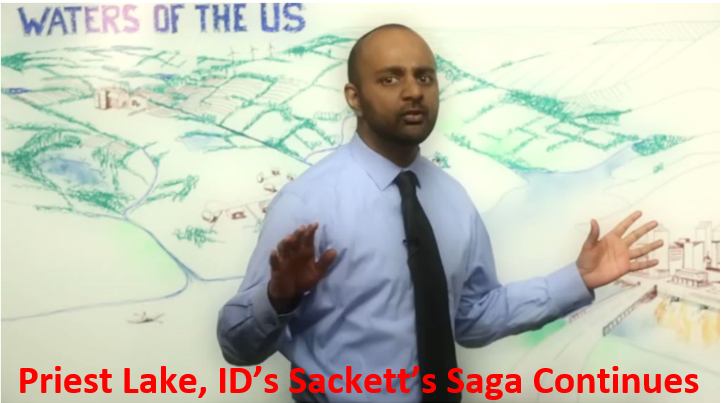 Submitted by the Committee for a Constructive Tomorrow

The Committee for a Constructive Tomorrow welcomes the opportunity to comment on this important matter.

At issue is the proposed rule by the U.S. Environmental Protection Agency (EPA) and the U.S. Army Corps of Engineers (Corps) to put back into place the pre-2015 definition of “waters of the United States” (WOTUS), updated to reflect consideration of recent Supreme Court decisions.

Unfortunately, a return to the pre-2015 definition of WOTUS in no way addresses the problems plaguing the regulation of certain bodies of water under the Clean Water Act (CWA).  A case pending before the U.S. Supreme Court, one that arose under the pre-2015 definition of WOTUS by EPA and the Corps, bears this out.  The case involves the assertion by EPA and the Corps of regulatory authority over dry land owned by a married couple in Priest Lake, Idaho, with the two federal agencies claiming jurisdiction because the couple’s lot is said to have a “significant nexus” to navigable water.

In April 2007, Mike and Chantell Sackett broke ground to build a home on a lot they had bought in a residential subdivision in northern Idaho.  The lot is bordered to the north by a paved county road, to the east and west by other residential lots, and to the south by another road and then a row of houses on the Priest Lake shoreline.  EPA and the Corps sent investigators to the job site to determine compliance with the CWA.  Without doing any of the measurements required under the law, EPA announced the couple was violating the CWA by putting additional dirt on their land without a permit from the Corps.  EPA then sent the Sacketts an Order stating that their lot was a “federally regulated wetland” (i.e., WOTUS) and ordered them to restore the lot to its natural condition and fence it in for three tears, or face tens of thousands of dollars in daily fines.  The EPA Order was based on the property being adjacent to a small ditch across the street that eventually drained into Priest Lake.

In 2008, the Sacketts sued EPA to challenge the agency\s assertion of control over their lot.  Their argument was (and remains) that the CWA only regulates “navigable waters.”  Nothing on the Sackett’s vacant lot is remotely navigable, thus, they argued that EPA could only claim authority if the term “navigable water” includes non-navigable land.

As a result of conflicting views expressed by the Supreme Court, three successive presidents – Obama, Trump, and Biden – have developed their own rules over what is a WOTUS.  Obama’s 2015 rule gave broad authority to federal agencies under the “significant nexus’ interpretation; Trump reversed that by favoring a “connected waters” approach; and now Biden is returning to something similar to what Obama adopted.

This, however, will simply take the country, particularly millions of rural landowners, back to the 2015 status quo ante, the same situation that gave rise to the nearly 15-year-old Sackett court case.  Farmers, ranchers, fruit growers, and many others in rural America would be in the same regulatory limbo as ever.  The Sackett case shows that pre-2015 definitions lead nowhere.  What they do is provide EPA and the Corps with the authority to impose federal zoning across millions of acres of private land under the guise of protecting ill-defined bodies of water.  The goal is to erase the word “navigable” from the phrase “navigable waters of the United States” contained in the CWA\s language relating to federal regulatory jurisdiction.

Ironically, this latest effort to reimpose the heavy hand of the administrative regulatory state on rural America comes when the Supreme Court has agreed to hear the Sackett case, which it is set to do in the fall, with a ruling expected by spring of 2023.  If that decision comes down on the “connected waters” side of what is a WOTUS, the current rule-making exercise may be for naught.

Committee for a Constructive Tomorrow