The first U.S. troops sent to assist NATO allies in East Europe landed at a military base near the Poland-Ukraine border Saturday, a Polish military spokesman confirmed.

“As announced, the first elements of the brigade battle group from the 82nd Airborne Division of the United States Army have arrived in Poland,” the spokesperson said Saturday, according to Reuters. 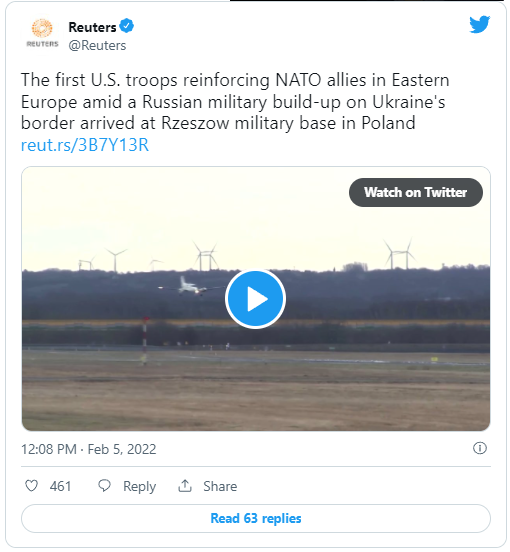 Footage showing a small plane with high-ranking U.S. army officials on board landing in Poland was posted Saturday.

The U.S. army confirmed that the commanding general of the 82nd Airborne Division, U.S. Army Major General Christopher Donahue, had departed to Poland, as preparations for another deployment of about 1,700 U.S. service members continued at the base, Reuters reported.

President Joe Biden approved around 3,000 additional troops to be moved to Poland, Germany and Romania Wednesday.

“These are not permanent moves,” Kirby Pentagon press secretary John Kirby said Wednesday. “These forces are not going to fight in Ukraine.”

The deployment comes amid growing fears of Russian military aggression towards Ukraine, after nearly 130,000 Russian troops had been located along the Ukrainian border. (RELATED: Bloomberg Issues Apology After Reporting That Russia Invaded Ukraine)

The U.S. Department of State previously put 8,500 troops on high alert for potential deployment to the NATO allies in the region.

Russian President Vladimir Putin met in-person Friday with his Chinese counterpart Xi Jinping to discuss a range of issues, including growing tensions between Russia and the West that followed the escalation at the Ukrainian border.

The meeting of the world leaders resulted in a joint statement in which China announced its support for Russian opposition to further NATO expansion.