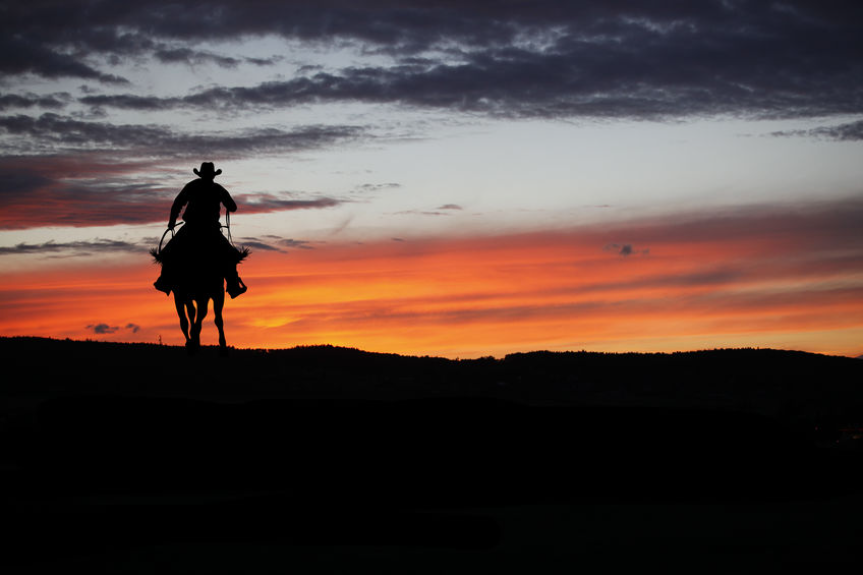 It has been one year since the devastating blackouts in Texas, so it’s time to examine whether Texas is in danger of repeating the disaster.

Winterization was one of the issues raised as a cause of the blackouts.

The adequacy of winterization plans for natural gas power plants won’t be known until after September 2022, when a statewide mapping of the electric supply chain is completed.

There were insufficient reserve margins before last year’s blackouts.

Wind and solar installations were included in reserve margins even though it’s impossible to guarantee they can generate significant quantities of electricity.

This chart from three years ago predicted that reserve margins in 2021 would be essentially zero when electricity from wind and solar was unavailable.

Only baseload power plants, i.e., dispatchable power, should be included in reserve margins. Natural gas, coal, and nuclear are the only types of power generation that can be relied on 24/7 throughout the year, assuming the plants are properly maintained, including winterization.

(A few states can rely on hydro or geothermal, but they are not available in Texas.)

Baseload power plants can have breakdowns which is one of the reasons for reserve margins. The other reason for maintaining reserve margins is that demand can also exceed previous peaks, such as unexpected air conditioning or heating loads.

Wind and solar are unreliable and cannot be included in reserves.

One would think it would be easy to determine whether Texas has adequate reserve margins for this winter.

Is ERCOT’s published reserve margins of 41.2% realistic for the winter of 2022? See red arrows. 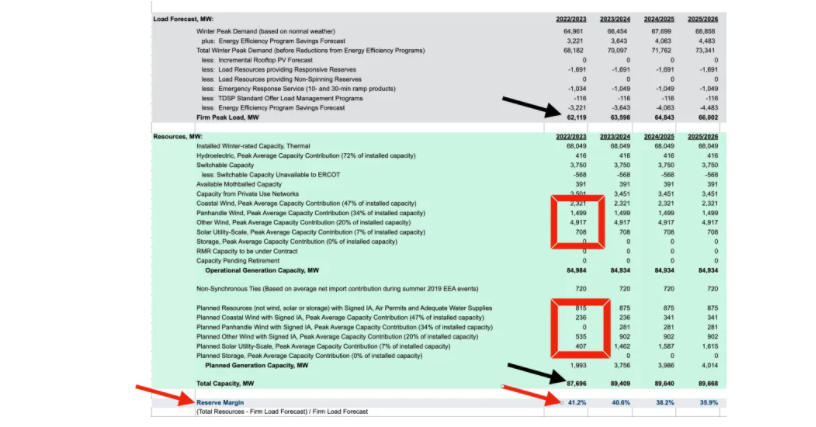 Why would ERCOT publish such an unrealistic reserve margin?

Did ERCOT expect the media to repeat the information? And for the public to be comforted by the news?

Note that peak demand was based on “normal weather”. But reserve margins are to protect against abnormal weather.

Note also that wind and solar are included as available supplies. These are bracketed by the red square in the accompanying table from the ERCOT report.

Subtracting wind and solar from available capacity establishes a reserve margin of 24%.

Wind and solar cannot be used as reserve capacity because wind and solar are unreliable. There is no sunshine at night, and there are multiple days where the wind doesn’t blow strongly enough, i.e., over ten mph, to generate meaningful amounts of electricity.

This is what happened in the winter of 2021 when a high-pressure zone stalled over the entire mid-continent of North America.

The reserve margin calculation is distorted by using Firm Load Forecast instead of the peak load actually experienced by ERCOT.

In last years’ disaster, the peak load was around 76,800 MW, approximately 16,000 MW higher than the Firm Load Forecast used by ERCOT to calculate this winter’s reserve margin. (Top arrow in accompanying table.)

Using the 2021 peak load of 76,800 MW, which is the least that should be expected in any future storm, and using total capacity without wind and solar, results in a reserve margin of 0.4%.

In other words, ERCOT’s realistic reserve margin for this winter is nearly zero.

In a special note, ERCOT says:

“Nearly 85,000 MW of resource capacity is expected to be available for the winter peak. This amount is all operational capacity.”

This includes wind and solar, presumably, as there is no comment to the contrary.

ERCOT continues to add large amounts of wind and solar, while adding only small amounts of baseload power.

ERCOT continues to add wind and solar, ignoring the need for baseload power.

It’s uncertain whether the winterization of natural gas power plants and pipelines will be completed before the winter of 2023.

Based on information published on the ERCOT website, ERCOT has insufficient reserve capacity to prevent a disaster this year if there is a severe winter storm.

Texas will continue to live with the constant threat of disasters unless ERCOT revises its policies. Adding more baseload power would be an essential first step.