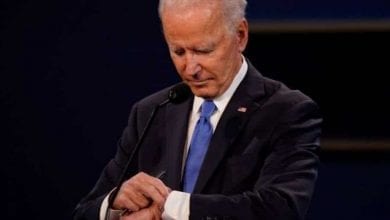 It shouldn’t be true, no one wants this to be true. But, apparently, the Biden State Department told reporters Sunday evening that the administration will not help Americans in Ukraine get out so they should make their own plans.

In a reprise to his terrible Afghanistan exit, President Joe Biden is ready to leave U.S. citizens to fend for themselves in a foreign country as an authoritarian regime is set to run it over.

While the president of the United States is chilling at Camp David, his administration is apparently ready to leave U.S. citizens at the mercy of a foreign enemy … again.

The announcement came during the NFL division playoff game between the Bills and Chiefs. Was the administration hoping to hide it under the cover of a sports event?

Honestly, Russia will likely leave enough time for Americans to get to Odessa International and fly out of the country should they choose. But the signal Biden is flashing is real – Russia is about to invade and he’s OK with that.

Putin has Sevastapol, but about 60% of sea traffic gets handled by the Southwestern seaports of Odessa, Ilyichevsk, and Yuzhniy – that’s what Putin really wants. The industrial centers are there as is a major international airport (Odessa International).

Most talking heads are saying he’s after Kiev (Kyiv) or a “strip of land on the east. But, Kyiv is a house-to-house fight with little gain and he already has eastern Ukraine. He could leave Kyiv intact and rape Ukraine’s industrial and transport sector with few losses.

Belarus may already have a Putin puppet president (PPP?), opinions diverge, and after Russia takes the SW ports and industry, Putin will likely do a soft coup in Kyiv to bring the former Soviet republic to heel.

German Chancellor Olaf Scholz seemed to echo Biden’s green light comment as he said possible sanctions against Russia should be “prudent” if it invades Ukraine because there will be consequences for the penalizers, too.

In other words, Germany needs Russian natural gas to heat its homes and they need some way to pay Putin for the fuel. Any international financial system sanctions could jeopardize their winter heating fuel supply. Exactly as Putin planned and Biden allowed. (see: Nortstream 2)