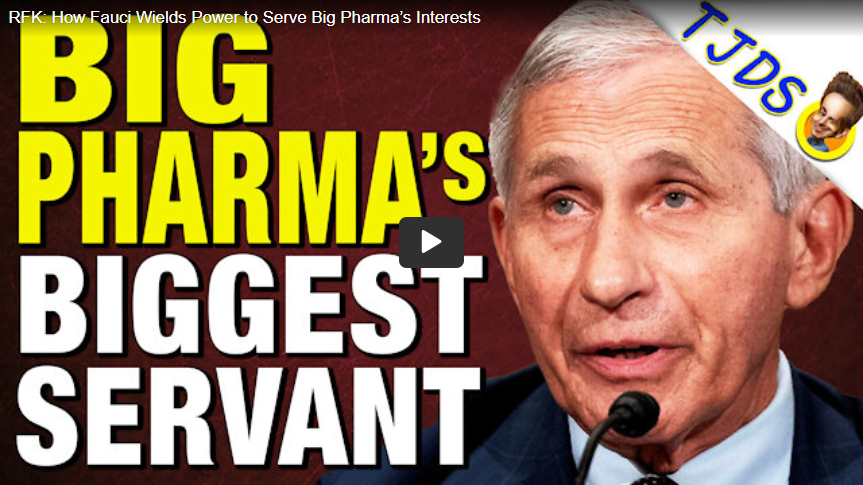 Looked at as a kind of savior, the man on the white horse that would ride us out of this coronavirus crises is actually Big Pharma’s biggest servant – here’s how public health has plummeted during his reign. 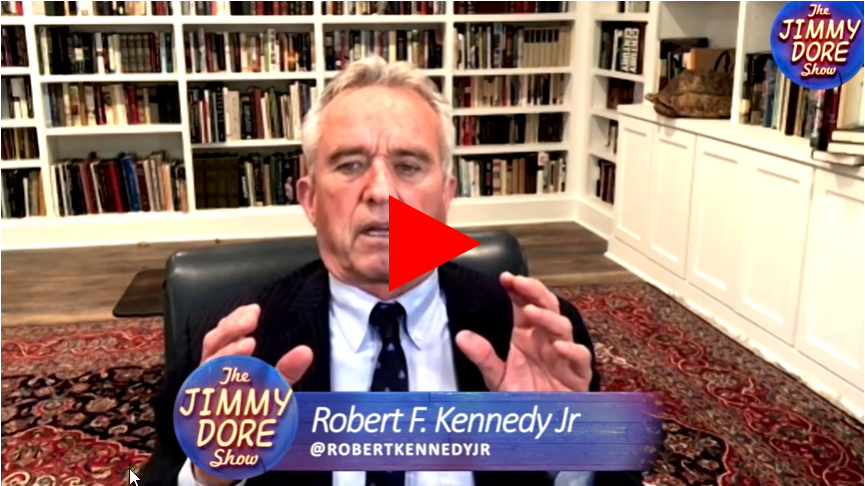 Robert F. Kennedy Jr. succinctly summarizes how Dr. Anthony Fauci wields his power to control and manipulate science in this riveting episode of The Jimmy Dore Show.1 Fauci has been painted as a hero throughout the pandemic, an image that is not only misleading but wildly inaccurate, as detailed in Kennedy’s best-selling book, “The Real Anthony Fauci.”

“I wrote the book because so many Americans were looking at Tony Fauci as this kind of savior,” Kennedy said. “… [T]he man on the white horse, or in the white lab coat, that would ride us out of this coronavirus crises but I knew from the beginning … that he does not do public health and has not done public health since the 1980s.”2,3

Rather than looking out for public health, Fauci and his agency, the National Institute of Allergy and Infectious Diseases (NIAID), prioritize pharmaceutical promotion. Kennedy refers to Fauci as the “leader of the pack” when it comes to those promoting pharmaceutical products, profiteering from Big Pharma and promoting their own personal power.

In 1984, when Fauci was appointed director of NIAID, 11.8% of Americans had chronic disease, but this has risen sharply since.4 Fauci doesn’t talk about this public health failure — at least not publicly — but as Kennedy noted, it was Fauci’s job to figure out why cases of autism, food allergies, ADHD, sleep disorders, juvenile diabetes, rheumatoid arthritis and many other chronic and infectious diseases have skyrocketed.

It was Fauci’s job to conduct research on these diseases to figure out their etiology and environmental causes to protect public health, but instead he turned the NIAID into an incubator for pharmaceuticals. According to Kennedy:5

“When Tony Fauci came in, 6% of American children had chronic disease. By 2006, 54% had it. We went from being the healthiest country in the world with the healthiest children to the sickest. Literally, we do not even qualify as a developed nation. We are 79th in the world, behind Nicaragua and Costa Rica in terms of our health outcomes.

And why did that happen? Well, the one figure who is more responsible for that than anybody else in the world is Tony Fauci. He is the reason we take more pharmaceutical drugs than any other nation in the world. Three times the average among western countries. We pay the highest prices and have the worst outcomes.”

Fauci has a $7.6 billion annual budget, which in total during his entire tenure is more than half a trillion dollars that he’s been in control of. Instead of using that to reveal the environmental issues leading to outbreaks of chronic disease, he uses the money to develop new drugs, Kennedy explains, which he then farms out to universities:6

“He shares the patents with them, and then he sells them to the drug companies, splits the patents with them, and he walks those drugs through the FDA approval process, which he completely controls from the bottom up. And then he gets them approved and in many cases he himself profits. People within his agency can collect $150,000 a year from royalties off each of these products.”

The NIH owns half the patent for Moderna’s COVID-19 injection, which means that it stands to make billions of dollars as a result. Four of Fauci’s top deputies will also collect $150,000 a year for life as a result — from a product they’re responsible for regulating, an obvious massive conflict of interests.

“The mercantile and commercial interests have overwhelmed the regulatory function at that agency and it no longer does public health — it does pharmaceutical promotion,” Kennedy said.7 As an example, between 2009 and 2016 there were 240 new drugs approved by the FDA, all of which came out of Fauci’s “shop,” he added. “He is the incubator for the whole pharmaceutical industry.”8

Fauci has spread the notion that he is untouchable, going so far as to tell MSNBC that an attack on him is an attack on science:9

“It’s very dangerous … because a lot of what you’re seeing as attacks on me quite frankly are attacks on science, because all of the things that I have spoken about consistently from the very beginning, have been fundamentally based on science.”

Throughout the pandemic, “trusting the science” has become a cultural statement and propaganda tool, but one that’s far from what true science is all about. Far from being a source of independent science, in essence Fauci’s control — in collusion with that of Bill Gates — has rendered the majority of global scientific research nothing more than pharmaceutical propaganda. Kennedy explains:10

“Every virologist in the world knew that the coronavirus was engineered. All you have to do is look at the genome. Everybody knew that and they kept silent for a year, and here’s how. He gives away $7.6 billion a year. That’s two to three times what [Bill] Gates gives away. Him and Gates work tandemly. They partner up on everything. They talk together a couple times a week.

They are business partners … in 2000, in Gates’ library, the two of them got together and they formally formed a partnership. You take those two and one other guy — Jeremey Farrar — who is their other de facto partner who is the head of the Wellcome Trust, which is the U.K. version of the Bill and Melinda Gates Foundation. Between those three men, they control 61% of the biomedical research funding on Earth.

So if you want to get your study funded, you’ve got to go to those guys. Not only can they give you the money, but they also can kill a study because they control all of the other funding sources. They can kill a study, they can ruin a career, they can bankrupt colleges who do science that they don’t want done. So they are able to really dictate virtually all the science on the globe.”

Drug Companies and Universities All Benefit

Kennedy gives a theoretical example of how Fauci yields his immense power to influence science: In his lab, Fauci develops a molecule that kills a virus. This is done by scientists dropping molecules onto one of countless viruses — influenza, Ebola, coronaviruses, zika and others — in petri dishes and test tubes to see if it kills them. If the molecule works to kill the virus in a petri dish, they move on to testing it on rats infected with the virus.

“If the rats don’t die, now he’s got a drug,” he says. “It’s an antiviral and it’s usable in mammals because it will kill the virus but it won’t kill the mammal. Then he farms it out to the university.”11 There, a PI, or principal investigator, who is usually a person of power, such as the dean of a department, does a phase I trial, experimenting on animals and around 100 humans. Kennedy explains:12

“For each of the humans that he recruits — he’s a medical doctor, he brings in patients, persuades them to take part in the study — Tony Fauci’s agency gives him $15,000 for every one of those patients. The university keeps 50% of that so now they’re also part of this process. And then if the drug gets through that phase I, then they move on to phase 2 and phase 3. So now they have to bring in 20,000 or 30,000 people.

They bring in a drug company as a partner, and they go through the phase 2 and phase 3 [trials], and then at the end of it, they all split up the patents. So the drug company owns half, Tony Fauci’s agency may get part of it and he and his cronies take little slivers of it so they get paid for life. The university gets a part of it, so now you have all the medical schools in the country … dependent on this income stream.”

At this point, the new drug still has to get regulatory approval, which brings it before a supposedly independent panel of experts. But this panel isn’t made up of independent scientists looking for the truth about whether or not the drug is safe and effective; it’s made up of Fauci’s and Gates’ PIs, who often have drugs of their own in development. Kennedy continues:13

“When this drug goes to FDA to get approved, it goes to a panel. Tony Fauci’s always saying it’s an independent panel who decides, based upon real science, whether or not this drug is worthy of approval. It’s not an independent science. They’re virtually all his PIs or Gates’ PIs.

Those guys go sit on that panel for a year, and they know that they’ve got their own drugs back at Baylor University they’re working on, or Berkeley or Columbia, that they know are going to be in front of that same panel next year. And they’re all scratching each other’s backs. And they approve that drug and then they go off the panel, finish their drug, and then that drug goes in front of a panel that’s similarly constituted and populated.”

These principal scientists act as gatekeepers to the public, spreading the official narrative under the guise of independent science, often pushing questionable COVID-19 policies. “These PIs control the journals, they control the public debate, they’re on TV all over the world, and these are the people that form the narrative, that protect the orthodoxy,” Kennedy says.14

“If you look at Tony Fauci as the pope, the PIs are the cardinals, the bishops and the archbishops. And they’re the ones that protect the orthodoxy, that make sure that the heretics burn, that doctors who disagree are … delicensed, that they get discredited, that they get gaslighted and vilified and marginalized. They’re the army that controls the narrative.”15

Waking up to Fauci’s façade is necessary to understand the orchestrated planned use of pandemics to clamp down totalitarian control. You can find even more details about the coalition of sinister forces — intelligence agencies, pharmaceutical companies, social media titans, medical bureaucracies, mainstream media and the military — that are intent on obliterating constitutional rights globally in “The Real Anthony Fauci.”

Kennedy’s book has been a best seller for two months now and if you haven’t already picked up a copy I would encourage you to do so now.

Dore not only does interviews with important guests as the one above, but he also is a comedian. It can be very depressing when we keep sharing all the devastation that has resulted from COVID. Dore’s mission is to take the news and share the obvious in an entreating way as can be evidenced below how he interprets CNN giving the CEO of Pfizer the CEO of the year award. 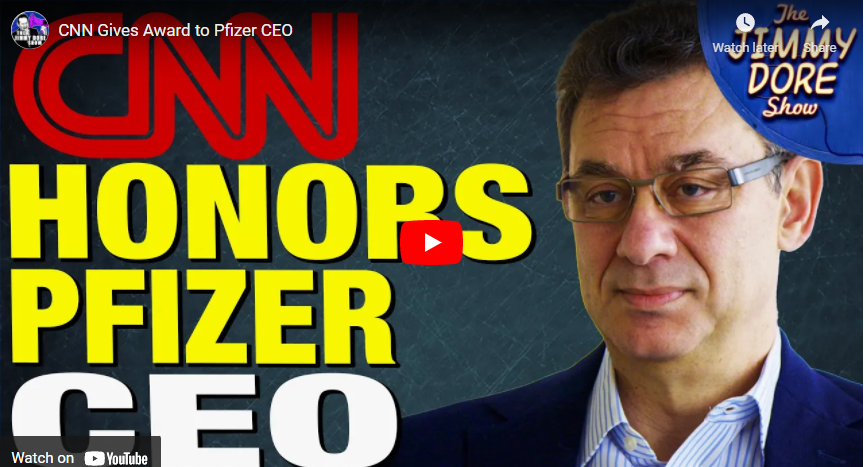 As most of you know, I’ve been forced to remove 25 years of free health information from my website under threats of the technocratic elite.

By popular demand, I am pleased to share with you an exciting update — my entire Censored Library has finally returned! Through Substack, an information sharing platform, I am once again able to share with you all the valuable research I have gathered through the years. 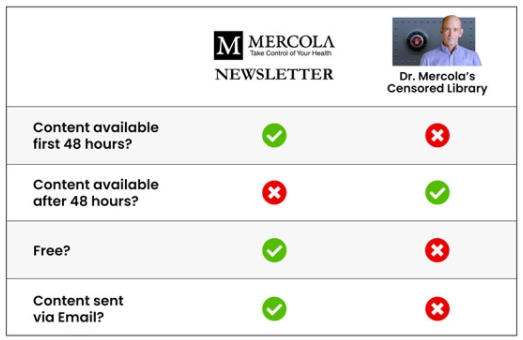 My daily newsletter is still free and content will be released on Mercola.com before anywhere else. After 48 hours the articles will be transferred to my Censored Library on Substack. To view any missed content, a private membership is available for a very minimal amount with a portion of proceeds going toward our health partners who are helping in the fight to protect our freedom of speech and your right to take control of your health.