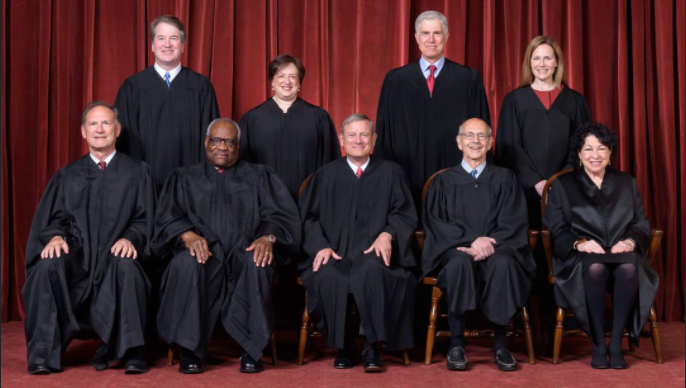 PULL BACK THE CURTAIN AGAIN

In the second of the two cases heard by the Court regarding mandatory vaccination during the Covid-19 pandemic episode, the Court again, in Biden, Jr. v. Missouri and Xavier Becerra v. Louisiana writes “per curiam”, meaning the writer of the opinion does want to be identified. The key difference between this case dealing with health care workers and the NFIB v OSHA case dealing with all employees of employment with more than 100 employees is, as the Court stated:

“… Congress authorized the Secretary to promulgate, as a condition of a facility’s participation in the programs, such “requirements as [he] finds necessary in the interest of the health and safety of individuals who are furnished services in the institution….”

The question obviously is why is Congress not involved in making these important decisions where the public can be heard through their elected representatives and the issues debated before such draconian measures are imposed? Because, and Congress is a master at this politically, it is much easier to transfer the responsibility saying the agencies have the “expertise” to better decide it. That would be true except that Congress has all the experts available to it that it wants to call upon for advice. So the Court states:

“…we agree with the Government that the Secretary’s rule falls within the authorities that Congress has conferred upon him….”

The crux of the opinion states:

“Congress has authorized the Secretary to impose conditions on the receipt of Medicaid and Medicare funds that “the Secretary finds necessary in the interest of the health and safety of individuals who are furnished services.” 42 U. S. C. §1395x(e)(9).* COVID–19 is a highly contagious, dangerous, and—especially for Medicare and Medicaid patients—deadly disease. The Secretary of Health and Human Services determined that a COVID–19 vaccine man- date will substantially reduce the likelihood that healthcare workers will contract the virus and transmit it to their patients. 86 Fed. Reg. 61557–61558. He accordingly concluded that a vaccine mandate is “necessary to promote and protect patient health and safety” in the face of the ongoing pandemic. Id., at 61613.

The rule thus fits neatly within the language of the statute. After all, ensuring that providers take steps to avoid transmitting a dangerous virus to their patients is consistent with the fundamental principle of the medical profession: first, do no harm. It would be the “very opposite of efficient and effective administration for a facility that is supposed to make people well to make them sick with COVID–19.” Florida v. Department of Health and Human Servs., 19 F. 4th 1271, 1288 (CA11 2021).”

So the holding of the case is:

“We accordingly conclude that the Secretary did not exceed his statutory authority in requiring that, in order to remain eligible for Medicare and Medicaid dollars, the facilities covered by the interim rule must ensure that their employees be vaccinated against COVID–19.”

The other question since the ruling only affects those accepting Medicare or Medicaid funds, is whether private care facilities and companies will voluntarily comply and require it of its employees?

Disagreeing with the majority Justice Alito in a dissenting opinion, joined by Justices Thomas, Gorsuch and Barrett recognized that:

“… Under our Constitution, the authority to make laws that impose obligations on the American people is conferred on Congress, whose Members are elected by the people. Elected representatives solicit the views of their constituents, listen to their complaints and requests, and make a great effort to accommodate their concerns. Today, however, most federal law is not made by Congress. It comes in the form of rules issued by unelected administrators. In order to give individuals and entities who may be seriously impacted by agency rules at least some opportunity to make their views heard and to have them given serious consideration,…

“The agency that issued the mandate at issue here, i.e., the Centers for Medicare and Medicaid Services (CMS), admits it did not comply with the commonsense measure of seeking public input before placing binding rules on millions of people,…”

“Today’s decision will ripple through administrative agencies’ future decision making. The Executive Branch already touches nearly every aspect of Americans’ lives. In concluding that CMS had good cause to avoid notice-and-comment rulemaking, the Court shifts the presumption against compliance with procedural strictures from the unelected agency to the people they regulate. Neither CMS nor the Court articulates a limiting principle for why, after an unexplained and unjustified delay, an agency can regulate first and listen later, and then put more than 10 million healthcare workers to the choice of their jobs or an irreversible medical treatment.”

Where were the other so-called conservatives, Chief Justice Roberts and Justice Kavanaugh? Apparently they had joined the liberal justices in the “per curiam” decision to overturn the stay. As usual, it continues to prove that regardless of what anyone thinks a justice will be like before appointment to the Court, the resulting opinions show a different result.

The end result is that this is only the ruling on the stay granted in the lower court and unless the Court votes to grant a hearing on the ultimate issue (granting certiorari) this will be the end of the issue as far as health care workers are concerned.

We can only hope we don’t lose too many of what we considered to be our “heroes” only a short time ago or the federal government will have won the battle but lost the war.

Published with Permission of dcbrockett.substack.com