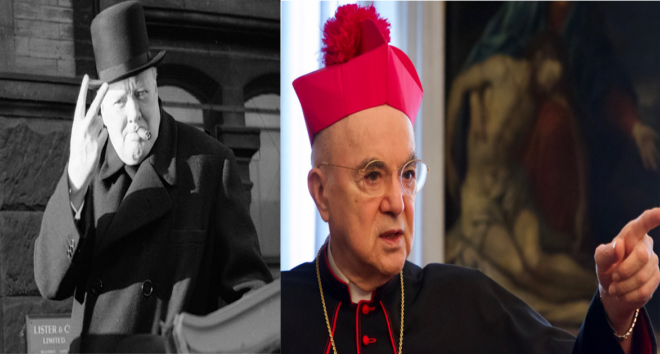 (This is the Introduction to a five-part “Deductive Reasoning” series that will follow over the coming days.)

God sends us the leaders we need, when we need them. But it is up to us to heed them.

Harken back to the 1930’s.  Winston Churchill recognized the emerging threat of Adolph Hitler and his National Socialist (Nazi) Party, and discerned the general outlines of its evil designs.

He tried to warn his countrymen of the “gathering storm” – yet was shunned and ridiculed by those both in his political party (Conservative) and political body (Parliament) – most either preferred to bury their heads in the sand, or to just swim with the prevailing current and hope that things would work out of their own accord.

Churchill was an iconoclast – one with a spine.  His fealty was to his country, and to pursuing what was right, notwithstanding unpopularity and ridicule.  Often such leaders are not vindicated until after they have left this earth. Churchill didn’t have to wait that long.

After appeasement with evil succeeded only in bringing the war that Churchill tried to warn about while there was still time to prevent it – when the storm was no longer gathering, but enveloping – Churchill was vindicated.  Before long he was named Prime Minister, and led his country – he inspired his people – to prevail in WWII.

It is generally acknowledged “but for” Churchill’s leadership, Great Britain – and with it, all of Europe – would have permanently succumbed to the National Socialist evil.  Without Churchill, there could not have been a D-Day, and the mass-murder concentration camps would have been able to operate until … even now?

We have become accustomed to – conditioned to? – assessing the world and its goings-on as solely secular matters; dealings by and among human beings in politics, media, entertainment, education and so on.  But we must now reorient; we must adjust our frame of reference.

Satan can only work his schemes through human actors; therefore, we must then be open to the possibility that what we observe occurring about us is actually his doing.  (Perhaps this is the beginning of discernment?)  Once we examine our world through that lens, we inevitably come to conclude that, for some things at least, no other explanation seems possible but that Satanic evil is at its root.

National Socialism was, at root, a Satanic evil (can one look at Hitler and his henchmen and not conclude “minions of Satan?”).

All forms of Collectivism – Communism, Socialism, Fascism, Progressivism, and today, Globalism – are, at root, Satanic evils.

In our times, the minions of the Great Deceiver are not only attacking us with readily identifiable “kinetic” military or police forces – which good people readily recognize and can organize against – but also through forces that we have been conditioned to trust, such as public health authorities, and even institutions of faith (see, e.g., the recent documentary Enemies Within the Church.

For decades we been assaulted by myriad and ever-more insidious means, targeting hearts, minds and, ultimately, our immortal souls – and now the crescendo of evil’s march appears to be imminent:

Cumulatively, we confront now not just tangible armies, but also intangible ideas that seek to not conquer territory so much as hearts and minds – and so souls.  The Great Deceiver is not just “at root” of tangible evil forces, but engaged in a “hot” spiritual war – one seeking acceptance of, and subjugation to his ends, by every soul on the planet.

Winston Churchill was a secular leader for a secular war – not just for his party, or his country, but on behalf of humanity.  But to repeat: God does indeed send us the leaders we need, when we need them – and it is up to us to heed them.

Consider that for this spiritual war, He may have sent us Archbishop Carlo Maria Viganò – not just for Catholics, or just for Christians, but for all of humanity.

As with Churchill in the 1930’s Parliament, Viganò’s artful oratories of warning have rendered him a near-outcast within the Catholic Church.  He has recognized the nature of, and continues to confront the “gathering storm” of Satanic threats: the current Pope who not just appeases, but embraces “climate change” and the rest of the Globalists’ “Build Back Better” scheme; the targeting of President Trump to extra-legally remove him from office; the potentially genocidal ambitions of “Covid” and the so-called vaccines, and the neo-feudal existence that the Globalists intend for whatever portion of humanity survives the “vaccines.”

Some believe that we are on the cusp of “End Times” as prophesied in the Bible.  This, none of us can know for sure.  But if it is, are we supposed to then shrug our shoulders and resign ourselves to the inevitable triumph of evil on this earth (albeit for a limited time)? NO!

At a minimum, we must be a remnant bearing witness – especially for the millions today who appear to be victims of what medical professionals refer to as mass formation psychosis, and which we might diagnose as demonic possession (albeit, perhaps of varying degrees between particular individuals).

Churchill’s storm arrived.  We still can pray that Viganò’s storm may yet be deflected, or at least mitigated.  But should the storm envelop us, might we soon witness Carlo Maria Viganò vindicated and rising to become the next Pope – similar to how Churchill rose to Prime Minister for the duration of WWII – to provide spiritual leadership and inspire us through to the other of the storm?  (Intriguingly, as this was written, reports have appeared that the current Pope is not expected to live through 2022.)

Of course, a Pope Viganò cannot alone defeat the evil ones, any more than Churchill was the only leader opposing the Axis.  Perhaps having received a calling, secular allies are emerging across the globe, such as (in alphabetical order): Riccardo Bosi of the Australia One Party; Mike Lindell in the U.S.; Eric Zemmour of RECONQUÊTE! in France.

Yet in this spiritual war, we mortals cannot hope to defeat the evil forces alone – victory will come only with God.  For as stated, this is not a secular-dominant war, but a spiritually-dominant, good vs. evil war.

[A quick aside:  Winston Churchill and the allies defeated the (at root) Satanic evil of the WWII axis.  Ronald Reagan and the allies defeated the (at root) Satanic evil of Soviet-led Communism / Socialism – with no little assistance from Prime Minister Margaret Thatcher and Pope John Paul II.  In both of those defeats of Satan, the United States of America was the indispensable element.  Perhaps Satan learned from his defeats.  This could perhaps explain why Cultural Marxism has been working at eroding and thus neutralizing from within the United States’ commitment to righteousness, and the extraordinary efforts to effect the color revolution preventing duly-elected President Trump from embarking on his second term, and instead installing the CCP-puppet regime otherwise known as the “Biden-Harris administration.”  In other words, perhaps Satan upped his game to incorporate more of a spiritual warfare emphasis, rather than just a secular or “kinetic” warfare attack.]

And so, perhaps a spiritually-oriented counterpart to Churchill is appropriate for this time and place; the emergence of Archbishop Viganò may well be a sign that God is ready to stand with us – if we call on Him through prayer, and each do our part as we may be inspired by the Holy Spirit.

We the average people, and God, can outmaneuver the evildoers who currently appear to hold all the cards – we can outflank them with faith and prayer!

Even if not Catholic, or even if not a believer, you will benefit by acquainting yourself with Archbishop Viganò’s messages of recent years – his December, 2021 letter to Americans is a good place to begin. Other good sources are here, here, and here.

We were born for this time and place – best you familiarize yourself with the righteous side.

I am the author of the book Communiqués From the Vast Right-Wing Conspiracy– available on Kindle ($2.99) and in paperback ($12.99). Please consider enjoying my work by purchasing and reading.  Thank you.