Deductive Reasoning: The GOP Was “In” On the Steal 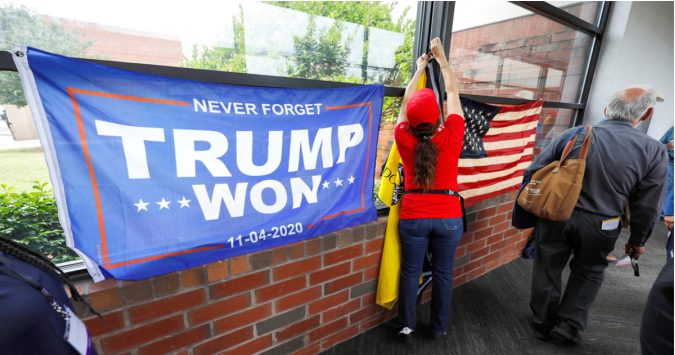 Deductive Reasoning: The GOP Was “In” On the Steal

Deductive Reasoning: Reaching an answer or a decision by thinking carefully about the known facts. – Cambridge Dictionary

KNOWN FACT: Forces were at work before the 2020 election to steal it – see, e.g., contemporaneous reports about the “Transition Integrity Project,” and TIME Magazine’s post-election boast-fest regarding how it was pulled-off.  This had to be known in-real time by whoever actually controls the GOP, at least to some degree.

KNOWN FACT: The 2020 election was stolen – a “color revolution” was executed – and Donald J. Trump, the duly-elected President of the United States, was prevented from assuming office. This theft likely affected several down-ballot races as well.  This constituted a coup; one which installed the illegitimate (what we’ll refer to as) the Biden-Harris Junta.  (If you don’t yet accept that a coup occurred, please study the material on FrankSpeech and this writer’s contributions both prior to the coup here and after the coup here).

KNOWN FACT: The duly-elected President, between November 3, 2020 and January 20, 2021, attempted to contest the steal / coup – and the RNC (GOP) raised money to ostensibly to fight the steal / coup, but effectively did nothing.

KNOWN FACT: Since the stolen election / coup, virtually all GOP officeholders have participated in a conspiracy of silence to not discuss it, nor discuss grassroots efforts for forensic audits to get to the bottom of the steal / coup.

After January 6, 2021, virtually all GOP officeholders willingly adopted the Democrat / media slogan – the Big Lies – that 2020 was a “free and fair election” and that “Joe Biden is the (legitimate) President of the United States.” See, e.g., Senator Rick Scott with Chris Wallace in February, 2021.

KNOWN FACT: Rona McDaniel, head of the RNC, publicly embraced the steal / coup on November 18, 2021 by saying that Joe Biden was legitimately the President.

KNOWN FACT: Certain Democrat-controlled areas have long been notorious for non-digital election fraud.  That capability was put on steroids in 2020 with extra-legal actions by election officials in multiple states to, e.g., sending masses of mail-in ballots and eliminating signature verification.

KNOWN FACT: Over the years the GOP has been indifferent (at best) to the ongoing election fraud in those Democrat areas.

KNOWN FACT: If the Democrats – and whatever forces are allied with / running the Democrats – could pull-off what can only be called a coup in 2020, they could do it again, at will.

KNOWN FACT: This capability would be seen by the GOP as an existential threat – at least it would if it were actually a political party in competition with the Democrats.  (If it were, at a minimum it would have both been screaming bloody murder about what occurred with the 2020 election, and made securing future elections its #1 priority.)

KNOWN FACT: The GOP remains hands-off about election integrity, past and future elections.  In fact, in an appearance on Bannon’s War Room on December 3, 2021, Representative Matt Gaetz disclosed that the GOP is committed to NOT even discussing, much less pursuing election integrity efforts.

KNOWN FACT: Even if the GOP sat on its hands in the 2020 election cycle because forces within it wanted to dispose of President Trump, this election theft capability would present a post-Trump existential threat to the GOP – if it were actually a political party in competition with the Democrats.

KNOWN FACT: The GOP has not called-out the Biden-Harris Junta / Democrat Party on their open use of the “Build Back Better” slogan – much less, the significance of that slogan.  That the Democrats used it indicates that they weren’t concerned about any GOP response.  (More on this in the next installment of this “Deductive Reasoning” series titled “Who Actually Controls the GOP?”)

Based upon these known facts, we can conclude:

The GOP has all-but-announced that not only does it agree with the stolen election / coup of 2020, it has no intention of taking any meaningful steps to prevent election fraud in the future.

Indeed, one might conclude that the GOP (in collusion with the “mainstream” media) intends to gaslight America (and the world) into a status quo ante in which the 2020 coup never occurred, that it was a “free and fair election” – and so we go back to an electoral system in which some powers behind the curtain determine actual winners. In fact, now a status quo ante+ with 2020 serving as the template, so that no unapproved candidate can ever actually win no matter how overwhelming the legitimate votes they receive. (They are now prepared so that a 2016 surprise with Donald Trump “overwhelming the algorithms will not be allowed to reoccur.)

At the same time, the Democrats (and GOP) must realize that due to the Biden-Harris-CCP’s intentional sabotage of the U.S. – disproportionately hitting the pocketbook of average citizens – the Democrats will have to cheat on an even larger scale in 2022 / 2024.

Thanks to the GOP’s calculated inaction, the Democrats have a clear glide path for outcome-determining fraud.

Since no institution voluntarily commits suicide, the GOP must be operating under a different calculation, having concluded that hackable election machines and non-digital fraud are something not to be opposed.

Or should we say: those who actually control the GOP are operating under a different calculation?

In the next installment, we will discuss who may actually control the GOP and the Democrat Party.

NEXT: Deductive Reasoning: Who Actually Controls the GOP?

I am the author of the book Communiqués From the Vast Right-Wing Conspiracy– available on Kindle ($2.99) and in paperback ($12.99). Please consider enjoying my work by purchasing and reading.  Thank you.

Thomas C. Wigand is a citizen patriot – trained as an attorney and hailing from Florida – who in in his own small way is fighting alongside stalwarts such as Trevor Loudon, Cliff Kincaid and David Horowitz. Fighting alongside them and all other patriots that recognize the existential threat posed by the Four Horsemen of the Apocalypse Collectivism: Progressivism; Socialism; Fascism and Communism. Mr. Wigand is the author of the book “Communiqués From The Vast Right-Wing Conspiracy” available on Amazon in print and Kindle versions.