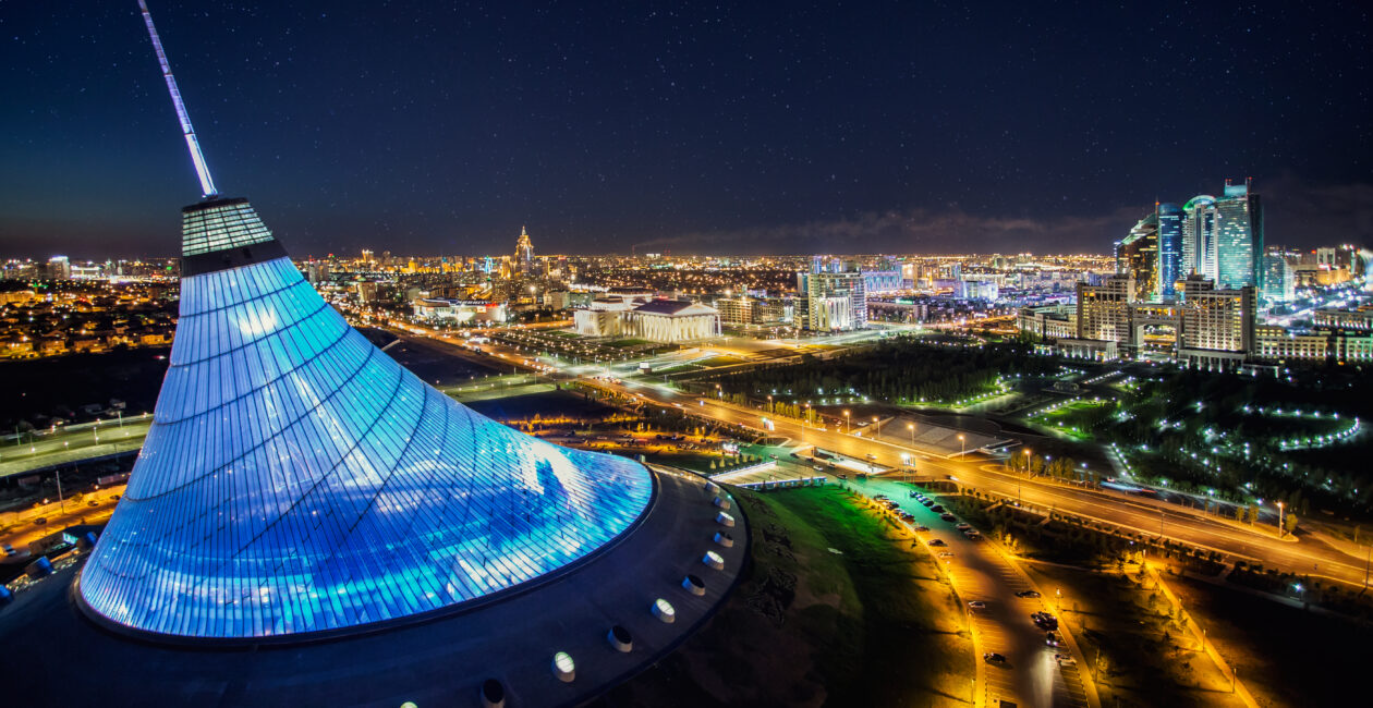 The Khan Shatyr Entertainment Center lights up the night sky over Astana, Kazakhstan. Kazakhstan was one of the Soviet satellite republics until the 1991 collapse of the USSR. (Photo: Bilal Arslan/500px Prime/Getty Images)

By Johnathan Little and Alexis Mrachek

On Dec. 25, 1991, the once seemingly invincible Union of Soviet Socialist Republics fell when Mikhail Gorbachev, then-secretary of the Soviet Communist Party, transferred his presidential powers to Boris Yeltsin, the leader of the new Russian Federation.

When Gorbachev assumed office in 1985, he aimed to bring the Soviet Union economically, technologically, and socially up to par with the West. In an attempt to achieve that, in 1986, Gorbachev launched glasnost (“openness”) and perestroika (“restructuring”), which afforded Soviet citizens more freedom to engage in a freer market economy and a semblance of freedom of speech.

Gorbachev engaged in open dialogue with President Ronald Reagan. In 1987, Reagan stood against tyranny and advocated for the fall of the Berlin Wall by demanding, “Mr. Gorbachev, tear down this wall!” The Reagan Doctrine effectively applied economic, political, and strategic pressure, which significantly contributed to the eventual fall of the Soviet empire.

Since the breakup of the Soviet Union, several of those former Soviet republics have improved on economic and social fronts.

The Baltic nations (Estonia, Latvia, and Lithuania) have shown impressive results due to their adoption of free markets and rapid democratization.

That free market approach included monetary reform in 1992, and it allowed Estonia to become the first former Soviet republic to have its own currency.

In addition, the country has effectively dealt with corruption by instituting the rule of law. Estonia also implemented a flat-rate personal income tax in 1994.

Due to these fundamental changes, Estonia became the first former communist country to be listed in the “free” category in The Heritage Foundation’s annual Index of Economic Freedom. (The Daily Signal is the news outlet of The Heritage Foundation.) To this day, Estonia enjoys an incredibly free economy and serves as an example of a country that values personal freedom.

In the middle of the Baltic States, Latvia also has an extraordinarily free and vibrant economy. Over the past 25 years, it has utilized free trade and a competitive entrepreneurial spirit, which have led to Latvia’s rise in placement in the Index for Economic Freedom. In addition, Latvia is a democracy that holds fair elections and political pluralism in high regard.

Over time, Lithuania has also significantly increased its economic freedom, rising from a “repressive” country in 1996 to a high-ranking “mostly free” country.

Property rights, governmental integrity, and monetary freedom have steadily risen in Lithuania’s journey to improve its economic situation. Furthermore, Lithuania is a democracy with high respect for civil liberties, such as freedom of speech, assembly, and religion.

Despite the conflict between Armenia and Azerbaijan, the South Caucasus region has shown some promise in terms of prosperity.

Central Asia has displayed itself as a region with the potential to improve, especially because the countries there continue to struggle with authoritarian governments and poverty.

While lagging in economic freedom, Ukraine has made notable improvements since 2019. To improve, Ukraine must implement policies that advance economic freedom, utilize its strengths and resources, and continue to engage with Western markets.

Russia, despite being under Vladimir Putin’s autocratic rule, regularly engages in Western markets. As a result, Russian citizens can enjoy something of a market economy.

However, Russia still struggles with corruption, low levels of investment, and organized crime. Dissidents such as Alexei Navalny and Lyubov Sobol are shining examples of those willing to combat the tyranny of centralized power.

While some former Soviet republics continue to struggle under authoritarianism and corruption, developments are occurring that should spur optimism and hope.

Many of those nations—whose populaces suffered under communism—are improving year after year despite hardship. The United States should engage in free trade with those former Soviet republics, which hope to attain economic freedom.

With the encouragement of one of the freest nations in the world, those nations have reason to look toward a brighter future.

Johnathan Little is a recent graduate of Georgia Tech and a former member of the Young Leaders Program at The Heritage Foundation.

Alexis Mrachek is a research associate on Russia and Eurasia at The Heritage Foundation.