Now That Governments Have Been Trapped In Their Lies, What Horrors Await Us In 2022? 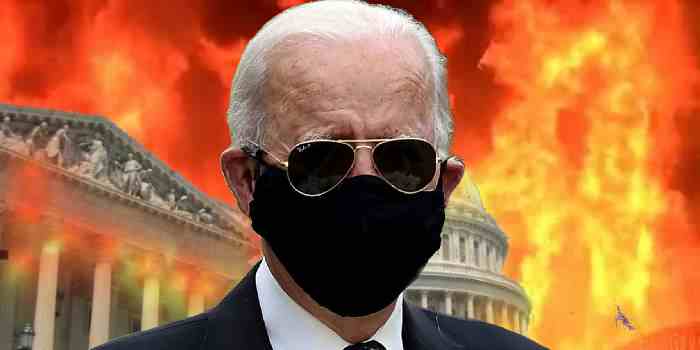 Now That Governments Have Been Trapped In Their Lies, What Horrors Await Us In 2022?

As powerful governments, media, unelected health authorities desperately scramble to regain credibility and gravitas, are any horrors being planned to divert attention

With their lies, veiled threats and dire predictions of a “dark winter” with coming massive deaths of the unvaccinated, the Democrats, media and unelected health authorities have painted themselves into a corner.

Though there won’t be much media reportage on it, they’re desperately scrambling to regain credibility and gravitas now that the public is aware that they’ve been had.

What are governments going to do when they can no longer easily stampede the masses into mass hysteria?

What will happen when it sinks in that people lost homes, jobs, freedom, independence, and even their health because of the overreaction of governments to a virus with a 99% survival rate?

Will people join forces to see that it can never happen again?

President Joe Biden has been caught falling up the steps of the Covid-19 scare.

Despite draconian measures that have included federal mask and vaccine mandates, despite the CDC cutting isolation restrictions from 10 days to 5, Biden admitted on Monday ‘there is no federal solution’ to combatting COVID-19.

In the full thrust of the braggadocio promise to ‘shut down the virus’, O’Biden has walked out of the arena

In other words, in the full thrust of the braggadocio promise to ‘shut down the virus’, O’Biden has walked out of the arena.

“Republicans are blasting President Joe Biden after he said ‘there is no federal solution’ to combatting COVID-19 during a virtual meeting with 25 governors.” (Daily Mail, Dec. 28, 2021)

Knowing they will face the wrath of the voters in 2022 Mid-Term elections, the Dems, of course are providing their unpopular leader with cover by claiming that the Republicans are taking him out of context.

“They claimed the now-viral clip of Biden was ‘a total lie’ and edited to suggest he is ‘quitting on dealing with COVID and just throwing it to the states’.(Daily Mail) 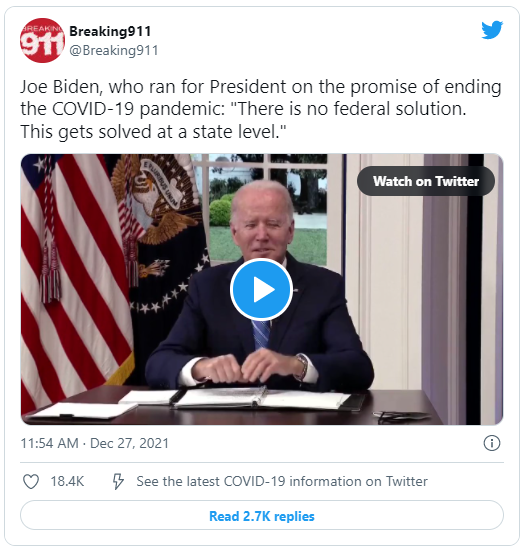 ‘I think we’re going to clear the press first’

“Biden’s comments came as COVID cases in the US have jumped by nearly 70% over the past two weeks and the CDC cut isolation restrictions from 10 days to 5.(Daily Mail)

“The GOP, citing a comment Biden made in October 2020, released a tweet implying the president did an about-face on his commitment to battling the pandemic, which has come back with a vengeance with the highest amount of cases in a day since January—before vaccines were created.

“‘BIDEN, TODAY: “There is no federal solution’ to COVID,”’ the Republican National Committee tweeted, and included footage of the president from Monday’s meeting with 25 governors.

“Biden was meeting Monday with 25 of the nation’s governors—a mix of Republicans and Democrats—where he addressed the ongoing pandemic.

“After his speech, Biden asked White House Coronavirus Response Coordinator Jeffrey Zients to open the floor to questions from the governors.

“However, before taking any questions, Zients quickly booted the press from the room, saying: ‘I think we’re going to clear the press first.’

Not as easy to get rid of as the virus!

“It’s the latest instance of White House staffers appearing to shield the gaffe-prone president from the press. Last week, Biden cut short questions after a speech, saying: ‘I’m not supposed to be having this press conference.’(Daily Mail)

“During the speech, he told the governors that there was ‘no federal solution’ to the Omicron variant causing cases to spike around the country, saying the solution was solidly on the ‘state level.’

“His message to governors was: ‘If you need something, say something. We are going to have your back.’

“The president’s comments came as the CDC cut in half isolation restrictions for Americans who catch COVID from 10 to five days, and similarly shortened the time that close contacts need to quarantine.

“The restrictions come as several industries face staff shortages caused by the federal mandates and the administration’s failure to provide adequate testing.

“North Carolina Rep. Madison Cawthorn – the youngest member of Congress – also chimed in on Biden’s handling of the virus.

‘Joe Biden blames the unvaccinated for COVID more than he blames China,’ said Cawthorn, a Republican from North Carolina. 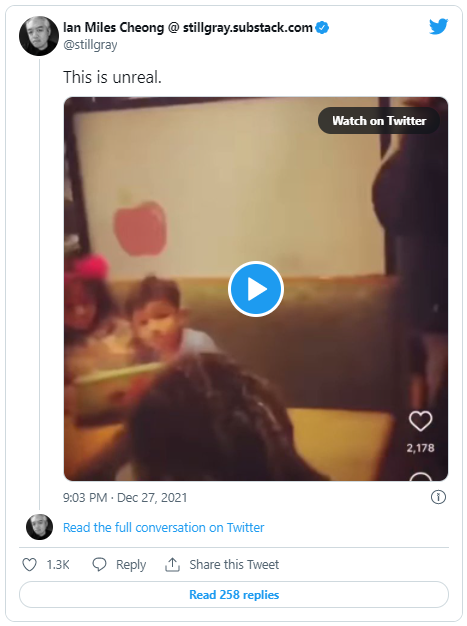 If Biden really wants to “shut down the virus”, he should start by shutting down the southern border

“COVID cases in the US have exploded over the past two weeks, as the newly discovered Omicron strain begins to take hold in the country. (Daily Mail)

“America is currently averaging 198,326 cases every day, a 68 percent increase over the past two weeks

“The US has not recorded a higher seven day case average since January 19, the backside of the nation’s most devastating COVID surge to date.

“Both hospitalizations and deaths have remained steady in recent weeks, not rising at the same pace as cases.

“COVID cases in the US have exploded over the past two weeks, as the newly discovered Omicron strain begins to take hold in the country.”

“The country is averaging 71,302 hospitalizations every day, only an eight percent increase over two weeks. Deaths are up three percent during that time span to 1,328 per day.

“This could be a signal of the Omicron variant – which accounts for 73 percent of cases in the US, according to most recent data from the Centers for Disease Control and Prevention (CDC) – being more mild than other strains.

“Deaths and hospitalizations do lag behind cases, though, and a similar spike could be seen in those metrics soon as well, though.

If Biden really wants to “shut down the virus”, he should start by shutting down the southern border where millions of migrants are crossing without being tested for Covid-19.

Without it the surge is out of anyone’s control.

A legitimate 2022 worry: As powerful governments, media and unelected health authorities desperately scramble to regain credibility and gravitas, are any horrors being planned to divert the attention of the masses away from what the Biden admin and other governments are doing to their own populations?

Unfortunately we may not know until those horrors are upon us.