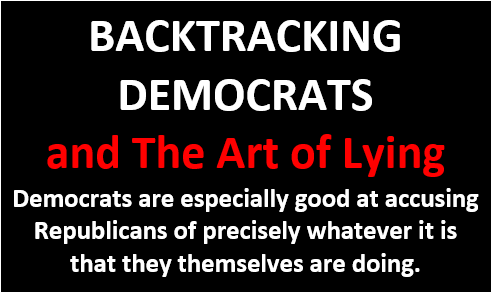 Skyrocketing inflation, invasion at the southern border, record homicides in Democrat-run cities … the list goes on.  So now that the results of Democrat policies have brought about a tidal wave of buyer’s remorse, what’s the Dems’ next move?  Triple down?  Quadruple down?  Maybe not.

The Democrats’ urge to relentlessly push forward with their anti-America agenda, regardless of how unpopular it is with a majority of voters, is eerily similar to Tourette’s syndrome in that it’s an urge they cannot control.  In the make-believe universe of the Radical Left, reality does not exist, thus nothing can stand in the way of their adolescent fantasies no matter the consequences.

At the same time, the Democrats’ desire to maintain power over others — particularly those who disagree with their worldview — trumps even their loudest Tourette’s Tantrums.  So long as they are unable to rig every election with 100 percent certainty — or, better yet, eliminate elections altogether — they have no choice but to give priority to winning elections.

That’s why, with little more than ten months left until the 2022 midterms, the win-at-all costs Dems are switching gears and focusing on the one thing they hope can save them from being swept out of office:  backtracking.  To be sure, to give an inch on their childish demands is excruciatingly painful, but being booted out of office would be even more painful for them.

That’s why, notwithstanding the angry howls coming from the most deranged members of their party, the Dems are already backtracking on many of their favorite socialist issues — e.g., $450,000 payments to illegals, banishment of Trump’s remain in Mexico policy, forgiveness of student debt, offshore drilling ban, and all sorts of crime-friendly policies.

Even soon-to-be former speaker Pelosi lamented that she has no idea what is causing the record crime wave in cities across America, while Mayor London Bree feigned outrage over out-of-control crime in San Francisco.  And Minneapolis, of course, has already started to beef up its police force.

But perhaps the biggest tipoff to the Dems’ backtracking strategy is Doofus Joe awarding the Congressional Medal of Honor posthumously to the 13 soldiers killed as a result of his botched withdrawal from Afghanistan.  It was a gesture that must have had American-hating Democrats gnashing their teeth.

And let us not forget that Biden’s handlers now have him finally crediting Donald Trump for his success in getting a vaccine developed in nine short months, a far cry from his saying, at a CNN townhall back on February 17, that there were no vaccines available when he took office.  It was a whopper that only a senile Corn Pop storyteller could have told without embarrassment.

All this is yet another reminder that the totalitarian left — from Lenin to Mao, from Fidel to Obama — always plays the long game while fighting the short-term battles.  Democrats are fully prepared to pretend as though they’ve had a change of heart in order to hold onto power in 2022, knowing that they can once again put their agenda into high gear once victory is achieved.

Will their strategy work?  Unfortunately, so long as there are millions of low-IQ and low-information voters, it is guaranteed to work to one extent or another.  Lincoln was right when he said you can fool some of the people all of the time.  While it is now clear that a majority of Americans are rejecting Democrats and their scorched-earth policies, the walking dead will always be with us.  Make no mistake about it, facts never get in the way of a true believer’s blind rage.

It should also be pointed out that the backtracking strategy fits in nicely with a skill Democrats have mastered going all the way back to the Bolshevik Revolution.  I’m talking, of course, about the art of lying.  They are especially good at accusing Republicans of precisely whatever it is that they themselves are doing.  Again, you can fool some of the people all of the time, which is why, throughout history, the walking dead have demonstrated that there is no lie too big or too outrageous for them to believe.

Having said all this, there is one area where Democrats cannot afford to implement their backtracking strategy — “election reform.”  South Carolina Rep. James Clyburn made that clear when he voiced his concerns that if “election integrity” laws are not reinstated before the 2022 midterms, America will have “lost its democracy.”  Meaning, of course, that Democrats will have lost their ability to cheat.

And therein lies the challenge for Republicans.  Will they be wise enough, resourceful enough, and tough enough to keep Democrat cheating to a minimum?  If so, America is on course to witness an election in 2022 that promises to be more of a political earthquake than a mere landslide.

Should that happen, however, don’t expect Democrats to take voter rejection lying down. On the contrary, be prepared for them to belligerently refuse to recognize any and all legislation passed by a new Republican Congress.  And if Trump should win in 2024, we could very well witness a real insurrection on the part of Democrats, not a peaceful protest gone awry like the one on January 6.

But let’s not get ahead of ourselves.  Right now, the focus has to be on preparing for the 2022 elections, and the most important thing in that regard is for ineffectual Republican messengers to find a way to explain to disenchanted independents that Democrats have not had a change of heart and that their backtracking is nothing more than a ruse to deceive voters and lure them back into the make-believe world of the Radical Left.

Failing to do so would almost certainly be the end of democracy in America, though not in the way James Clyburn had in mind.