The Orchestrated Plan to Rob You of Christmas 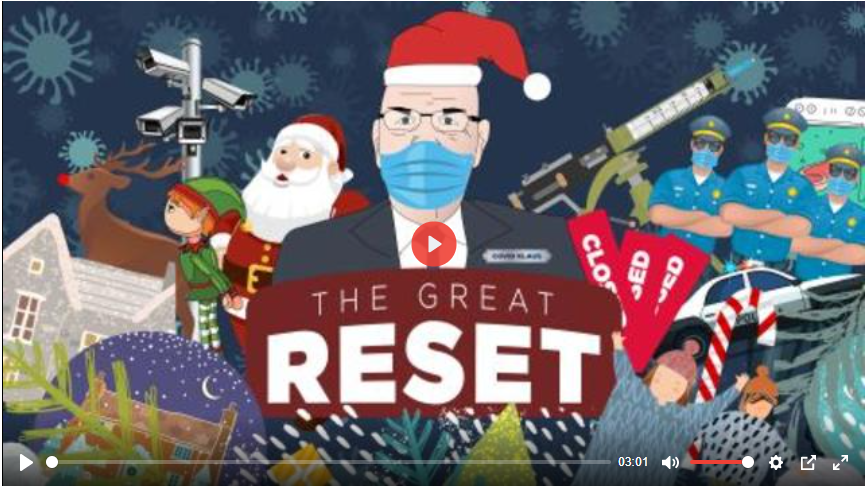 The Orchestrated Plan to Rob You of Christmas

Thanksgiving was canceled in many parts – what will happen with Christmas? Many government leaders want you to cancel your Christmas celebrations too, but should you? Find out how their plea is part of the ‘soft indoctrination’ to get you used to a bleak and inhumane way of life.

Another Year Without A Family Christmas?

While lockdowns were supposed to be temporary — initially just a couple of weeks to “flatten the curve” — nearly two years into the COVID-19 pandemic, there’s no end in sight. Thanksgiving was once again canceled in many parts of the U.S., and many government leaders again urged residents to cancel their Christmas celebrations too. The latest “Omicron” mutation has given bureaucrats additional reasons to unleash their power and raise panic.

What many still don’t realize is that the global response to the COVID-19 pandemic has little to do with the spread of an actual virus, and everything to do with the planned global takeover and implementation of a technocratic agenda known as The Great Reset.

Universal mask mandates, social distancing, business shutdowns, online working and learning, and quarantining of asymptomatic individuals are all forms of “soft indoctrination” to get us used to an entirely new, and unfathomably inhumane, way of life devoid of our usual rights and freedoms.

In addition to being a poster boy for technocracy, Schwab also has a strong transhumanist bend, and wrote the book on the Fourth Industrial Revolution, a hallmark of which is the merger of man and machine, biology and digital technology.2

According to Winter Oak — a British nonprofit social justice organization — Schwab and his globalist accomplices are using the COVID-19 pandemic “to bypass democratic accountability, to override opposition, to accelerate their agenda and to impose it on the rest of humankind against our will.”

While the Great Reset plan is being sold as a way to make life fair and equitable for all, the required sacrifices do not apply to the technocrats running the system.

On the contrary, as noted by Patrick Wood in an interview with James Delingpole, the wealth distribution and circular economies promoted by the technocratic elite will never benefit the people, because what they’re really referring to is the redistribution of wealth from the people, to themselves.

Evidence of this can be seen in the decision to allow big box stores to remain open during the pandemic while forcing small businesses to close, no matter how small the infection risk.

There’s really no rhyme or reason for such a decision, other than to shift wealth away from small, private business owners to multinational corporations. More than half of all small business owners fear their businesses won’t survive.3

According to the online newsletter Inequality, “The $5 trillion in wealth now held by 745 billionaires is two-thirds more than the $3 trillion in wealth held by the bottom 50 percent of U.S. households estimated by the Federal Reserve Board.”

As noted by Frank Clemente, executive director of Americans for Tax Fairness, “Never before has America seen such an accumulation of wealth in so few hands.”6

That’s technocratic wealth redistribution for you. Ultimately, The Great Reset will result in two tiers or people: the technocratic elite, who have all the power and rule over all assets, and the rest of humanity, who have no power, no assets and no voice.

That the COVID-19 pandemic is a form of class war is also evident in the way rules are enforced. While citizens are threatened with fines and arrest if they don’t do as they’re told, those who lay down the rules repeatedly break them without repercussions.

What Vaccines Have to Do With It

If you need more evidence that we’re in the middle of a technocratic takeover, look no further than the mass vaccination agenda and the promotion of fake, lab-grown meat. Bill Gates, another frontline technocrat, has repeatedly stated that we have no choice but to vaccinate everyone against COVID-19.

Naturally, he’s heavily invested in said vaccine and stands to gain handsomely from a global mass vaccination campaign. Technocrats are nothing if not self-serving, all while pretending to be do-gooders — much like COVID Claus in our little video.

Eventually, your personal identification, medical records, finances and who knows what else will all be tied together and embedded somewhere on or in your body. Every possible aspect of your biology and life activities will be trackable 24/7. You will also be digitally tied into the internet of things, which eventually will include smart cities.

When you follow this experiment to its ultimate conclusion, you find all of humanity enslaved within a digitized prison with no way out. Those who rebel will simply have their digital-everything restricted or shut down.

Fake Meat Is Part of the Reset Too

The rise of fake, lab-grown meat is a puzzle piece of The Great Reset agenda too. According to the World Economic Forum, lab-grown, cultured meat is a more sustainable alternative to conventional livestock, and in the future, we’ll all be eating a lot less meat. As noted on its website:7

“As the world looks to reset its economy, along with food systems, in a cleaner way post-pandemic, one more sustainable solution coming to fruition is cultured meat … Cultured meat takes much less time to grow, uses fewer of the planet’s resources, and no animals are slaughtered.”

But don’t think for a second that this has anything to do with environmental protection. No, it’s about controlling the food supply and preventing food independence.

Already, multinational corporations have taken over a majority of the global food supply with their patented genetically engineered seeds. Patented cultured meats and seafood will allow private companies to control the food supply in its entirety, and by controlling the food supply, they will control countries and entire populations.

Public health will undoubtedly suffer from this dietary switch, as canola and safflower oil8 are primary sources of fat in these fake meat concoctions. Vegetable oils are loaded with linoleic acid (LA), an omega-6 fat that, in excess, acts as a metabolic poison, causing severe mitochondrial dysfunction, insulin resistance, decreased NAD+ levels, obesity and a radical decrease in your ability to generate cellular energy.

Our LA consumption 150 years ago was between 2 and 3 grams per day. Today it is 10 to 20 times higher. If fake meat becomes a staple, the average LA intake is bound to increase even further.

Make a Christmas Vow to Undo The Great Reset

The Great Reset is well underway, but it’s not yet too late to stop it. Enough people have to see it and understand it, though. And then they must act. If we want to prevent The Great Reset from destroying life as we know it, we must view civil disobedience as a duty. We must resist it from every angle.

We must reclaim our sovereignty, our right to live free, to open our businesses and move about freely. We must communicate with our elected leaders and demand they not infringe on our constitutional rights. We have to engage in political processes and help educate our local sheriffs of their role as defenders of the constitution. We may also need to support legal challenges.

A small step in the right direction that you can take right now would be to celebrate Christmas like you normally would this week, and not allow the Klaus Schwabs and Bill Gateses of the world rob you of valuable time with family and friends.

There are no guarantees in this life, and for many, this will be their last Christmas. So, spend it well. Cherish life by actually living it and spending it with those you love. Refusing to give up our humanity is how we resist The Great Reset.