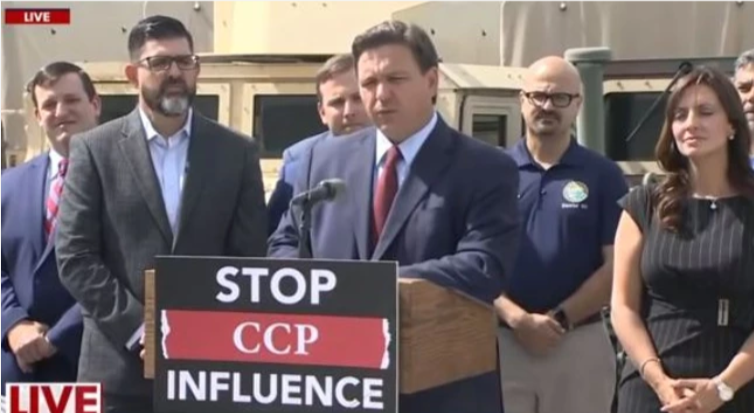 Florida is reassessing its exposure to foreign Chinese influence under a plan announced Monday by Gov. Ron DeSantis.

Jason Delgado writing for Florida Politics reports the plan calls on the State Board of Administration to audit all Florida Retirement System investments and investigate its holdings in Chinese companies.

Alongside Chief Financial Officer Jimmy Patronis and Attorney General Ashley Moody, the trio lambasted the Chinese government and described the relationship as a threat to national and economic security.

DeSantis is further urging the Legislature to pass laws that may bar investments into Chinese corporations.

“I would like the SBA [State Board of Administration] to survey the investments that are currently being done,” DeSantis said according to Mr. Delgado’s report. “When the Legislature comes back they can make statutory changes to say that the Communist Party of China is not a vehicle that we want to be entangled with. I think that that would be something that would be very, very prudent. I also think that our country as a whole, but certainly Florida, would like to see more production and manufacturing re-shored and we would be a great place to do that.” Video of the State Board of Administration meeting is available through this link.

Mr. Delgado observed the audit marks DeSantis’ latest “aggression” against Chinese influence, an issue of ongoing debate at both the federal and state level. In June, DeSantis signed a slew of measures, including two aiming to curb intellectual theft and the trafficking of trade secrets.

“For far too long, the communist regime in China has attempted to infiltrate our financial and educational institutions,” said Lt. Gov. Jeanette Nuñez. “I applaud Gov. DeSantis’ efforts that will curb China’s investment in industries critical to our national security and protect Floridians from the dangers posed by the Chinese Communist Party.”

Patronis, who acts as the state’s purse-keeper, pointed to China’s growing grip on the nation as reason enough for the state-level divorce. They, Patronis said, are a prominent influence in Hollywood and Washington. Patronis also blasted the nation’s ongoing supply chain issues and China’s unwillingness to investigate the origins of COVID-19.

Federal leaders, he added, have been silent far too long about the relationship.

“I take my fiduciary responsibilities seriously and I think the SBA needs to start asking harder questions when it comes to whether investing anymore in China is a good idea,” Patronis said. “It seems limiting our exposure to China is not only good for our country, but it is the financially prudent thing to do for our state.”

Governor DeSantis and his Republican colleagues in the Florida Cabinet are right to move to oust Red China from Florida’s state retirement investment pool.

For several years, the “Committee on the Present Danger: China” has been warning (see, for example, here) about the CCP’s penetration of our capital markets.

That penetration is being led by and advocated by none other than BlackRock, Inc. Chairman and CEO Larry Fink, head of the world’s largest independent investment fund.

As our friend Frank Gaffney explained, BlackRock, Inc., with its estimated $7 trillion under management, has repeatedly placed the interests of America – and, for that matter, those of his clients – second to his own agendas and interests. The most worrying of the latter are his sustained, concerted and personally lucrative efforts to promote investment in the PRC. They have, over time, had the effect of enriching and enabling the Chinese Communist Party (CCP), its corporate fronts and the malevolent activities in which they have long engaged – to the grave detriment of this country, its security, and values.

Governor DeSantis seemed to recognize that it is not just the Red Chinese he is up against, “If you look at how these major companies behave when faced with Chinese disapproval, they censor what the CCP tells them to censor, and we see groveling apologies,” DeSantis said in the release announcing his plan to move Florida out of Red China investments.

“Go back a generation, and the idea of the American elites was, ‘If we allow China into the WTO and give them most favored nation status, that will make China more like us,’” the governor continued. “This experiment has failed, and it has endangered our nation’s national and economic security.”

We applaud Governor DeSantis, and the rest of the Republican members of the Florida Cabinet, for moving against the Communist Chinese threat and we urge other Governors to do likewise.