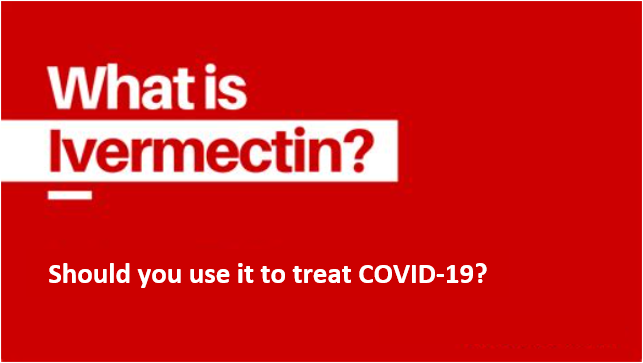 Ivermectin is one of the most important drugs ever discovered, along with penicillin and aspirin, for human use and health.  It is an anti-parasitic, but the events surrounding the Covid-19 crime against humanity have revealed that Ivermectin has stunning antiviral and anti-inflammatory properties that have been described as “borderline miraculous” in treating viral pneumonia, and as a broad-spectrum prophylactic against cold and flu viruses.

Well, the original patent holder, Merck Pharmaceutical, has donated and dispensed over 3.7 BILLION human doses in the Third World to date, with essentially zero side effects and zero reduction in efficacy since the late 1980s.  So, you tell me.  3.7 billion human doses, no side effects.  Sounds pretty damn safe to me.

Does Ivermectin treat and/or prevent Covid-19?

Yes. Also influenza and other coronavirus and rhinovirus colds, apparently. All indications are that it is a broad-spectrum antiviral.

How can I get Ivermectin?

Because Covid-19 is a meticulously premeditated crime against humanity designed to serve the agenda of the New World Order/Antichurch of a total “reset” of society, along with a massive, rapid reduction in the human population through both sterilization and induced illness via forced injections under the guise of “vaccines”, most doctors in the post-Christian west refuse to prescribe Ivermectin, either out of fear, or out of alliance with the Covidic political religion.  The easiest, most secure and least costly way, by far, to acquire Ivermectin is labeled for livestock use. No prescription is required and it can be purchased off the shelf in any farm supply or equine tack store.

What forms of livestock Ivermectin can I buy and use?

There are two forms: 1% Injectable solution (which we humans take orally by drinking it), and the edible paste form which is marketed for horses.

What about the “pour-on” form?

The pour-on form is designed as a fly repellant to be poured onto and stick for many weeks to the haircoat of livestock. The liquid medium of the pour-on is NOT INGESTIBLE.  If you buy and drink the pour-on after reading this, you are stupid. ONLY THE 1% INJECTABLE solution or the horse paste may be ingested.  Period.

What about the sheep drench form?

When I go into the farm supply store, should I ask the advice or permission of the staff and check-out clerk about buying and taking livestock-labeled Ivermectin? Should I draw attention to myself and cause a scene? Would that be a good plan?

Nope.  Keep your MOUTH SHUT. Sometimes the 1% Injectable is inside a glass case, and you will need to ask an employee to open the case for you.  Here is an example of how you might do that:

“Hi. I need something out of the Pharma case.  Could you please open it for me?”

You then take the 1% livestock injectable solution of your choosing out of the case like a boss, thank the employee, walk to the cash register and pay for it.

At the farm supply store I went to, there were big signs saying Ivermectin was NOT FOR HUMAN USE and that there was a risk of death.  They wouldn’t put those signs up unless it were true, right? I mean, it’s right there, IN WRITING.  All written words are true, right?

Those signs are abject bullshit, designed to frighten people off.

There are several brands and names of Ivermectin 1% injectable solution at my farm supply store and online.  Which do I buy?

I would recommend the least expensive one.  Ivermectin is off-patent, which means ANY pharmaceutical company can produce it, and almost every animal health Pharma company does, because Ivermectin is pretty much considered essential in animal agriculture today. Just look for “Ivermectin 1% Injectable solution”.  The brand is irrelevant.  It’s all exactly the same – just like aspirin in the human drug aisle.

I’m seeing stuff called Ivermectin PLUS or GOLD.  Should I get that?

Any of those “Plus” or “Gold” brands actually contain an additional drug for livestock that kills liver flukes.  You neither want nor need that.  And it’s way more expensive.  Just get the simple 1% livestock injectable solution.  You don’t have liver flukes.

What is in the other 99% of the 1% Livestock Injectable form?

Yes, although you have to search for it these days.  The New World Order and BigPharma are trying to keep it out of people’s hands in the First World.  If you’re good at web searching, yes, it is out there.

What is the dose for the 1% livestock injectable taken orally by drinking it for humans? 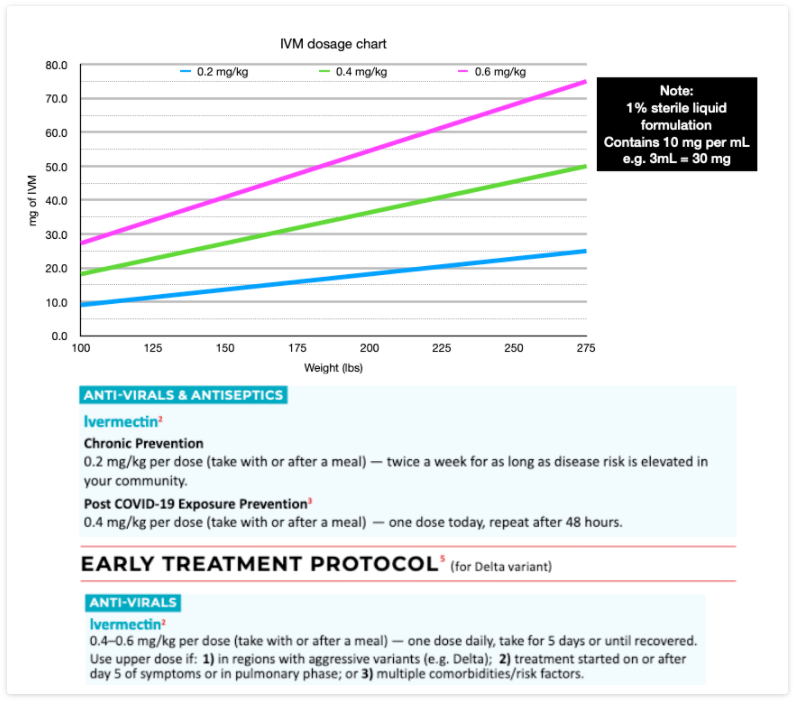 The dose is 1 milliliter/cubic centimeter per 110 pounds (50 kg) of body weight. As a prophylactic, the convention is now pretty much to take it monthly.  If a person is already feeling sick, the treatment dose is THREE doses as above, but spaced 48 hours apart.  So one dose on Monday, the next on Wednesday, the next on Friday, for example.  The 48 hour spacing has to do with the liver’s speed at metabolizing Ivermectin.  The 48 hour spacing MAXIMIZES the efficacy of the drug in the body.

How do I get the Ivermectin out of the bottle and measure it?

You will need a syringe and needle.  You can buy small syringes at any pharmacy that are marketed for diabetics to inject their insulin.  I recommend a 3mL size syringe for ease of measuring. Keep the rubber stopper in the bottle in place, because it self-seals when you stick the needle into it and pull it out.

Where should I store the 1% Injectable bottle?

Store In a cool, dark place (like a cupboard) but not in the refrigerator.

How do I ingest the Ivermectin?

Squirt the dose that you measured into your syringe into a small quantity of liquid, and then DOWN THE HATCH! You can put it into water, juice, wine, liquor, beer, Kool-Aid.  It doesn’t matter.  It tastes bad straight (although not so bad that it would make you retch – just unpleasant).  Remember, 1.5 mL is a relatively tiny amount – less than a third of a teaspoon.  It can be masked, even for children, very easily in something sweet.

If I don’t get the dose exactly right, will I die? Will I get zero effect if I’m a bit low on the dose?

No and no.  The dosage windows on these drugs are EXTREMELY WIDE and FORGIVING. Consider your bottle of aspirin.  Look at the dosage: “For 12 years of age and over, two pills every 24 hours.”  You do realize that the recommended dosage for almost all over-the-counter drugs is identical for a 12 year old girl and a 250 pound man, yes? Have you ever sawed an aspirin pill in twain with a razor blade and weighed the dust? No.  Exact same dynamic here.  Just get in the ballpark, and if you’re worried, by all means, aim HIGH.  Yes, HIGH.  You would have to be an absolute certified moron to overdose on Ivermectin.  Like drunken Russian taking a bet stupid.

Why wouldn’t the government and the BigPharma companies publicize this drug if it actually worked?

Because there is evil running this world that most people simply cannot comprehend.  The New World Order wants death, terror and submission.  Ivermectin eliminates that. Also, they want to terrorize people into getting their poison injections being called “vaccines” by telling people that “vaccination is the ONLY hope!” The Emergency Use Authorization of the not-vaccines was totally legally contingent upon there being NO OTHER TREATMENT for Covid. Therefore, Ivermectin and any other effective treatment must be concealed and suppressed by the New World Order and BigPharma.

BigPharma wants MONEY.  They want the hundreds of billions of dollars from the fake “vaccines”, AND they want to maintain their over-the-counter cold and flu symptom remedy markets.  THEY WANT YOU SICK.  THEY NEED YOU SICK.  Any drug that totally prevents colds and flus in the first place would cost BigPharma HUNDREDS of BILLION of DOLLARS globally, in addition to ending the trillion dollar money laundering scheme that is the coerced Covid not-vaccine market.

How does one take the Horse Paste form of Ivermectin?

The tube that the horse paste comes in has a built in measuring “clicker”.  For reference, one tube is a single dose for a 1250 pound horse, so you know an adult human dose will be roughly one-sixth of a tube.  The dosage is exactly the same as described above: As a prophylactic, the convention is now pretty much to take it monthly.  If a person is already feeling sick, the treatment dose is THREE doses, but spaced 48 hours apart.  So one dose on Monday, the next on Wednesday, the next on Friday, for example.  The 48 hour spacing has to do with the liver’s speed at metabolizing Ivermectin.  The 48 hour spacing MAXIMIZES the efficacy of the drug in the body.

You just eat it.  It does not taste good.  Whatever.  Just eat it.