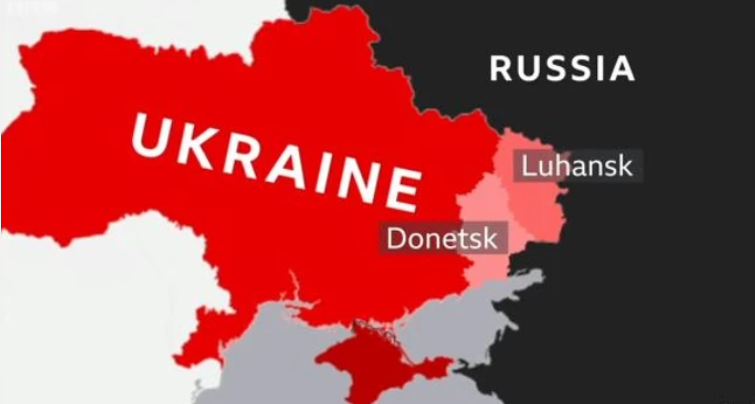 The DC war party has been beating the drums and demanding that the United States defend the sovereignty of Ukraine. However, the facts on the ground tell us that any military intervention we might undertake is about eight years too late.

In March of 2014, Russian President Vladimir Putin reclaimed Crimea as a part of Russia, and then-President Barack Obama and then-Vice President Joe Biden did absolutely nothing to prevent or rollback the Russian Anschluss reuniting Crimea with the historic Russian state.

Indeed, the sanctions imposed on Russia ahead of Putin’s emotional announcement did nothing to dissuade Mr. Putin, as he rushed to make a claim to Crimea that he argued conformed to international law and precedent. In his remarks, reported by The New York Times, he made clear that Russia was prepared to withstand worse punishment in the name of restoring a lost part of the country’s historic empire, effectively daring world leaders to sever political or economic ties and risk the consequences to their own economies.

And for Putin and his Russian nationalist party, this was something worth fighting for, as The New York Times reported:

In an emotional address steeped in years of resentment and bitterness at perceived slights from the West, Mr. Putin made it clear that Russia’s patience for post-Cold War accommodation, much diminished of late, had finally been exhausted. Speaking to the country’s political elite in the Grand Kremlin Palace, he said he did not seek to divide Ukraine any further, but he vowed to protect Russia’s interests there from what he described as Western actions that had left Russia feeling cornered.

“Crimea has always been an integral part of Russia in the hearts and minds of people,” Mr. Putin declared in his address, delivered in the chandeliered St. George’s Hall before hundreds of members of Parliament, governors and others. His remarks, which lasted 47 minutes, were interrupted repeatedly by thunderous applause, standing ovations and at the end chants of “Russia, Russia.” Some in the audience wiped tears from their eyes.

A theme coursing throughout his remarks was the restoration of Russia after a period of humiliation following the Soviet collapse, which he has famously called “the greatest geopolitical catastrophe of the 20th century.”

Two months later pro-Russian separatists in the Donetsk and Luhansk regions of eastern Ukraine held a referendum to declare independence from Ukraine.

Violence in eastern Ukraine between Russian-backed separatist forces and the Ukrainian military has by conservative estimates killed more than 10,300 people and injured nearly 24,000 since April 2014.

And again, the Obama – Biden administration did nothing, they even announced it was the policy of the United States not to give Ukraine lethal military aid.

The bottom line: Russia has already invaded Ukraine and has been steadily consolidating its grip on entire regions of the country since 2014.

And, as Peter Dickinson pointed out in an article for The Atlantic Council, Putin has signaled his intention to proceed further with the unofficial annexation of eastern Ukraine by issuing a new decree removing barriers to trade between the Russian-occupied regions and Russia itself. The move was praised by the occupation authorities in east Ukraine, who called it “a serious step toward integration with Russia.”

This development received none of the fanfare or media attention reserved for the deployment of elite Kremlin troops and Russian tank divisions, but it poses just as much of a threat to Ukraine’s future territorial integrity.

Ukraine condemned Putin’s decree as “gross interference” in the country’s internal affairs. In a statement, the Ukrainian Foreign Ministry claimed the step “clearly demonstrates Russia’s purposeful policy to pull the temporarily occupied territories of our state into its economic, political, electoral, and information space.”

The BBC reports in recent weeks, Russian tanks have been moving west towards Ukraine once again, prompting fresh, even starker warnings from U.S. intelligence circles that a cross-border offensive could be on the cards.

According to Ukraine’s head of military intelligence, Kyrylo Budanov, around 90,000 Russian troops are now deployed in the vicinity of Ukraine – fewer than during similar tensions last spring.

He believes they could launch an attack from several directions early next year.

Invading a non-threatening neighbor appears to be the inexplicable whim of a dictator or perhaps the act of an international bully intent on regional domination and to most American it looks like there is little to be gained and much that is allegedly valued in international relations to be lost by a Russian invasion of Ukraine.

But in addition to Russian national pride (a motivation completely inexplicable to American liberals) what the establishment media isn’t telling you is that there may be a very good reason for the Russian invasion of Ukraine that every American would understand – oil.

As we explained way back in 2014, Putin’s Russian Federation is Europe’s energy superpower.

Russia holds the largest natural gas reserves in the world. According to the US Energy Information Administration Russia is the second-largest producer of dry natural gas and third-largest liquid fuels producer in the world. Russia’s economy is highly dependent on its hydrocarbons, and oil and gas revenues account for more than 50% of Russia’s federal budget revenues.

The Russian-inspired separatist movement in the Donbas has crippled Ukraine’s energy sector and not coincidently, advanced the Russian near-monopoly of the European natural gas market.

And experience suggests maintaining that economically vital Russian monopoly and the political power that goes with it would be more than enough internal political justification for Putin to invade Ukraine.

A couple of weeks ago, Ukraine’s defense minister, Oleksii Reznikov, said he had asked the Pentagon for more help defending the country’s airspace and coast, lending further credence to the threat of Russian invasion.

“We need to cover our sky and our sea,” Reznikov told reporters at Ukraine’s embassy in Washington, after meeting with Defense Secretary Lloyd Austin at the Pentagon.

And, Bloomberg reminds us the latest fears of a possible Russian invasion of Ukraine coincide with the approach of the eighth anniversary of the so-called Maidan Revolution, in which widespread protests by pro-European Ukrainians toppled President Viktor Yanukovych, a Putin ally.

Having had eight years to entrench himself in Donbas and Crimea nothing short of war is going to pry Putin out of the Ukrainian territory he now occupies. The time to repel Putin was 2014 when his incursion into Ukraine was fresh and international outrage was high, instead, Obama’s “point man” on Ukraine, Joe Biden, spent his time and influence assisting his son in looting the prostrate Ukrainians.

Today, the effort to extract Russia from Ukraine would be much greater and the cost much higher – and does anyone really believe Joe Biden is up to the task? We urge conservatives to ignore the DC war party; the same Democrats who gave away Ukraine in 2014 and subsequently helped Hunter Biden loot the country are back in charge and we all know they are incapable of successfully facing down Putin and a reinvigorated Russia.

ConservativeHQ.com. A member of American MENSA and a veteran of over 300 political campaigns, he served on the staff of Vice President Dan Quayle, as Director of Policy and Communication for former Congressman Adam Putnam (FL-12) then Vice Chairman of the Oversight and Government Reform Committee’s Subcommittee on National Security and Foreign Affairs, and as spokesman for now-retired Rep. Mac Thornberry former Chairman of the House Armed Services Committee.