OMG! Omicron!  Or How to Operate a “Terror of Error”. 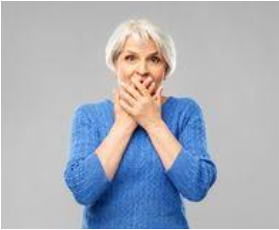 OMG! Omicron!  Or How to Operate a “Terror of Error”.

So, what the Hell is “Omicron”, and why should we care?

For one thing, it’s the 15th letter of the Greek alphabet. It’s also what the World Health Organization (WHO) has chosen to call the latest COVID-19 “variant” discovered recently in a few patients by a South African doctor.

It’s unclear why the WHO chose to leap from the 4th letter of that alphabet (Delta) in describing the latest “variant” to the 15th letter. Perhaps it sounds somewhat scarier than the other intervening Greek letters (Epsilon, Zeta, Eta, Theta, Iota, Kappa, Lamda, Mu, Nu, and Xi), which sound more like prissy little girls’ names.

This writer thinks “Omicron” sounds something like a rogue “Transformers” character name, so that’s perhaps the aura the COVID fear-mongers were trying to channel.

The news media generally, and every other pundit around have already chosen to use Omicron to again goose the fear reflex in a world already scared shitless from the outrageous coronavirus reporting.

Dr. Angelique Coetzee was one of the first to suspect that her clinic patients had a different variant, about November 18. She reported to Reuters that symptoms were “very mild” and treatable at home.

South Africa’s National Institute of Communicable Diseases (NICD) announced November 25th that the variant had been detected from samples taken from a laboratory from Nov. 14 through Nov. 16.

Mostly the media is concerned about the new virus because it may hurt Biden’s already horrible poll numbers, not because Omicron is really a major health threat, which it isn’t.

What’s more concerning to this writer is the media’s awesome ability to ignore facts. While breathlessly reporting the “potentially” serious nature of the new variant despite all evidence to the contrary, they see no hypocrisy in the fact that Vermont, with the highest nationwide percentage of vaccinated citizens, is at the same time the 4th highest in positive COVID cases from the earlier variants. Doesn’t this seem a little counter-intuitive?

The media has no difficulty ignoring facts on the ground about Republican-governed states like Texas. With a ban on vaccine mandates, Texas has among the lowest rates of positive cases, and has reached that milestone with the minimum possible masking and vaccination rules.

So back to “Omicron”: from all reports, it “may be” a highly transmissible, but much less serious form of what has proven to be a variant of one of the common cold viral families (Rhinovirus, Adenovirus, and Coronavirus).

Tellingly, the “weasel words” used most often by politicians and reporters alike to describe the new variant’s danger are: “possible”, “potentially”, “could”, “might”, “perhaps”, “maybe”, and about a dozen other qualifiers to protect the reporters from being accused of sensationalism.

As this is written, there are less than 200 total confirmed cases of Omicron worldwide, none in America, and zero deaths. Compared to a world population of 7.9 billion.

So, sensationalism it is. The media seems focused on virus reporting in order to deflect attention from the many indicators of the Biden administration’s abject failure to perform responsibly. If the coronavirus pandemic had never occurred, the Biden administration would have by now collapsed under the weight of its own ineptitude. Instead, Biden, et al are focused on blaming COVID for all their failures, and whining that if only the rest of America would get vaccinated, all would be well.

Yet to be explained is how vaccinating all Americans will cure runaway inflation, fuel prices not seen for decades, or why the Afghanistan withdrawal was such a monumental disaster, leaving that country a stinking pile of religious zealots with no concern for civil rights or any ability to bring their economy back from the 7th century.

Meanwhile under Biden’s watch, there is a huge fight between the Pentagon and many states’ National Guard units over whether or not those part-time soldiers must be vaccinated. The Secretary of Defense has indicated that those soldiers might not get paid or be allowed to participate in normal duties without being vaccinated.

This policy is now becoming a “real and present danger” to our nation’s national security.

Biden, who can’t even get the name of the new variant right (calling it “omnicron” instead of “omicron”) continually fails to make any accommodation for the immunity that has been achieved by those who have had COVID and recovered.

Biden’s “one size fits all” Orwellian approach is that everybody must get the jab, regardless.

Yet at the same time Biden is mouthing the words to everyone to “get vaccinated” thousands of “undocumented immigrants” are pouring over America’s southern border in numbers impossible for the Border Patrol to even measure accurately. Further, the Border Patrol has no prayer of insuring that each of those aliens is inoculated against any variant of coronavirus or, for that matter, has even had the basic vaccinations required for children to enter America’s school system.

One pundit (not this writer) said, “That’s how you’ll know Joe is taking the virus seriously, when he returns to Trump’s policy of closing the border.” It’s sad when words like “incompetent” and “inept” are the words that most often come to mind when talking about the current President.

America can’t, however, claim the only incompetent leaders. Japan, Israel, and others are, in almost unbelievable overreaction, doing something America doesn’t seem capable of doing: closing their national borders entirely based on the fear of the Omicron variant, which at this writing has not required hospitalizations or claimed a single life. World leaders who failed so miserably at the beginning of the panic, are now dancing in a circular firing squad, in “terror of error”.

The consequences of the (OMG!) Omicron variant pale in comparison to those of the Inner-city gang violence occurring daily in many of America’s major cities.