Regulations Are STOPPING Doctors From Treating COVID — and People Are Dying 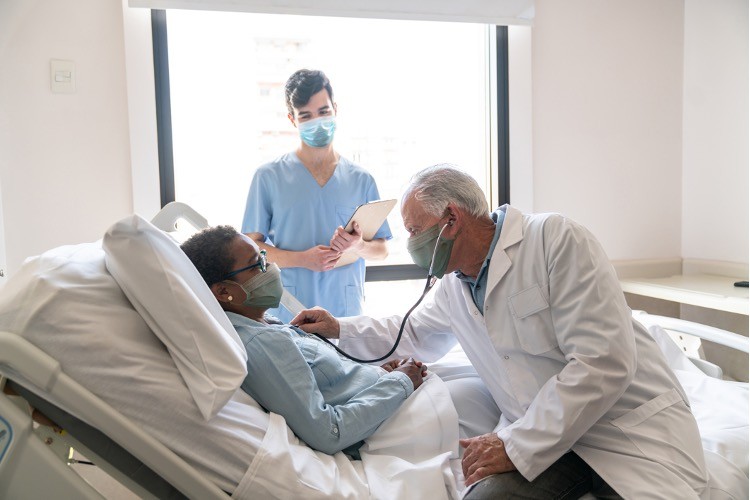 Regulations Are STOPPING Doctors From Treating COVID — and People Are Dying

It’s an all-too-common story. A teen I know currently has COVID-19 and is fairly sick. After an emergency-room examination yesterday, he was released from the hospital and he and his mother were simply told, “There’s no treatment protocol for COVID.”

Actually, there are effective treatments for COVID.

But they’re not officially sanctioned treatments — hence are doctors, hamstrung by labyrinthine regulations, refusing to administer them for fear of career destruction. In other words, bureaucracy is killing people on a massive scale.

The details of this story were recently revealed by a retired physician who provides a depressing, and seldom-heard, peek behind the curtain.

Writing at American Thinker last week, Dr. Ted Noel explained “why most practicing physicians go along with the Fauci Fraud,” as he put it. Noel, a retired anesthesiologist/intensivist who spent 36 years in his field, first points out that agencies such as the Centers for Disease Control (CDC) and National Institutes of Health aren’t first and foremost concerned about disease control and health. Rather, aside from being politicized as government entities will be, they’re gravely preoccupied with guarding their turf. They thus aren’t receptive to ideas originating beyond their walls — even though the wider scientific world has many thousands more researchers, and many more brilliant minds, than these agencies do. “Mount Olympus cannot be threatened,” Noel writes.

Dr. Noel, whom I spoke to on the phone today, then mentioned that the second leg of the fraud is that doctors don’t have the freedom to speak out. He said that if he’d written his article before retiring, he’d have been hauled before his group’s medical board, told to shut-up, and possibly even fined heavily. Oh, they might actually agree with his thesis, mind you, but allowing him to air it could cost them mightily.

The problem: The majority of Noel’s group’s patients were on Medicare or Medicaid. These two federally managed programs foist on physicians a multitude of rules, and those not properly jumping through all the hoops don’t get paid. Yet there’s far more to it.

Imagine that a destitute patient requiring bowel obstruction surgery is brought in for treatment. Prior to all the big-government intervention, the procedure would be done on a charitable basis and written “off as your good neighbor duty,” writes Noel (I believe this was sometimes called a “service case”). He continues:

Now you don’t get a choice. CMMS (the actual administrative agency) requires you to send a bill. Twice. Or maybe three times. Whatever it takes to turn the bill into bad debt. Then you have to send it to a collection agency. Your only alternative is for your group to bring it up in its Board meeting and declare it a write-off that gets noted in the minutes.

Aside from wasting time, this red tape has a very wicked side. “If you do the case for free (which you did before you spent that useless money on billing and collection), CMMS will define that as your ‘usual and customary’ bill for an exploratory laparotomy,” Dr. Noel explains. “Since your U&C is now zero, you can’t ever bill more than that for an ex lap in the future.”

In other words, the government is killing charity.

So how does this influence the administration of COVID treatment, such as ivermectin? Noel informs that among U&C bills and the hundreds of other rules the CMMS enforces is something called “Pay for Performance” (P-f-P). “Basically, P-f-P requires you to check a host of boxes when taking care of patients,” the doctor tells us. “If you didn’t get that IV antibiotic in 20 minutes before the incision, you failed P-f-P and may not get paid. The hospital won’t get paid to take care of the patient if there’s a complication.”

So while you may want to use ivermectin to treat a COVID patient, the problem is that it’s not on Medicare/Medicaid’s approved list of coronavirus medications. Your hospital’s pharmacy will thus resist the request, and the time required to gain their cooperation may mean canceling half your office day.

“The next day, you’ll get a visit from a coder, who will tell you that you didn’t use the approved treatment protocol and put the hospital in jeopardy because you flunked P-f-P,” Noel then explains. “By the way, that ‘coder’ is the person who ‘helps’ you use the proper ICD (billing) code for whatever the patient has in order for the hospital to make the most money. But that’s not the worst of it.”

Your having transgressed against P-f-P will set off alarm bells at the CMMS and focus its wrath upon you. They’ll scrutinize you for other “violations,” flag some innocent misstep as “Medicare fraud” and then fine you twice what you were originally paid; moreover, they can go back two years on this fishing expedition seeking red-tape trespasses. CMMS sounds a bit like the IRS, too: “They can ultimately take your house, your car, and your wife’s poodle while they’re at it,” writes Noel.

This explains why Noel’s group would have been livid if he’d published while still working. But what if you’re in private practice? You can’t prescribe ivermectin if your patient is on Medicare or Medicaid. But couldn’t you treat him off the books and take cash? Well, taking a private payment for a Medicare-covered service means being prohibited from seeing Medicare patients for two years.

Let’s forget all the regulatory traps. You’re conscientious and try to do the best for your patients. But you’re busy, and you can’t keep up with the flood of papers on all the various COVID bits. So you wear a mask, have your patients wear masks, and do a lot of telemedicine. You keep up on the latest through Medscape and the Morbidity and Mortality Weekly Reporter. You should be good? Not! MMWR is put out by the CDC, and they won’t say the first good word about HCQ or ivermectin. Medscape is a little better, but not much. And all the specialty societies are toeing the line. Can we guess why?

In other words, big government has the doctors — and us — coming and going.

Obviously, the system is broken to an extent, and there’s much blame to go around. Yet none of this would be an issue regarding SARS-CoV-2 if Dr. Anthony Fauci and the other medical-establishment pseudo-elites had instituted a proper official treatment protocol early on. But they’ve instead been focused on pushing the genetic-therapy agents (a.k.a. “vaccines”) at the expense of all else.

Note here that renowned physician Dr. Peter McCullough has estimated that a proper treatment protocol, established early last year, could have saved 85 percent of the China virus’s victims. So it’s not a stretch saying that Fauci & Co. have the blood of hundreds of thousands on their hands.

As for my friends’ situation, the boy, being a teenager, is in a group with a 99.997-percent COVID survival rate. So he’ll likely be okay. But I am gravely concerned about a high-risk individual, who I care about deeply, in the home. It’s a concern I wouldn’t have if our medical establishment actually cared about healing more than party, prestige, pocketbook, and politics.