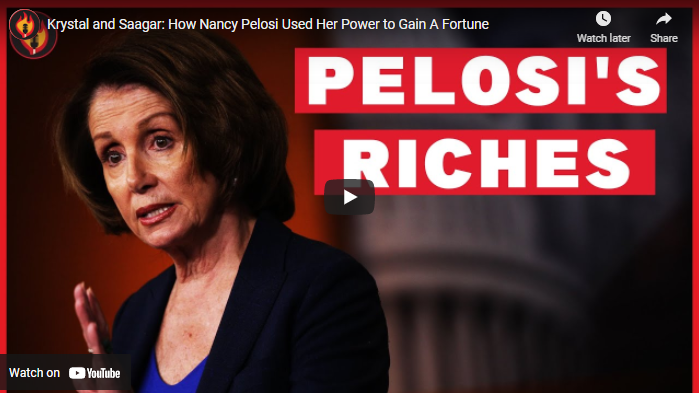 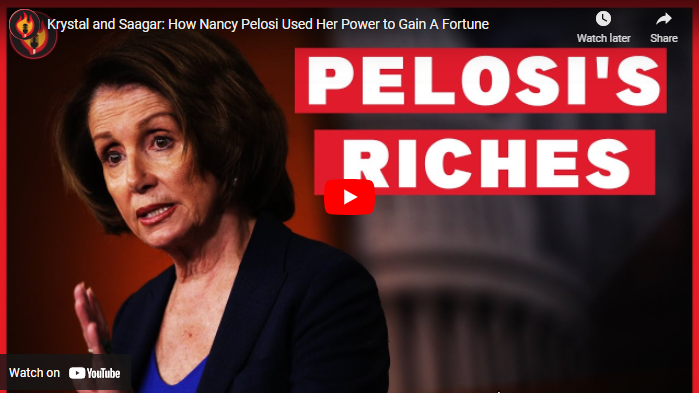 Politicians receive very comfortable salaries. Speaker of the House Nancy Pelosi, for instance, earns $223,500 a year, making her the third-highest-paid elected official in the U.S.1 Yet, since 2004, her wealth has increased from $41 million to nearly $115 million, according to OpenSecrets, which began tracking lawmakers’ personal finances that year.2

She’s not alone in her wealth. Personal financial disclosures reveal that more than half of Congress members are millionaires, with a median net worth of just over $1 million. As is often the case, however, the top 10% of the lawmakers in terms of wealth are three times richer than the bottom 90%. Pelosi comes in as No. 6 on a list of the wealthiest members of the 116th Congress.3

At issue isn’t the fact that politicians are multimillionaires; rather, as noted on a recent Twitter thread by Pulitzer Prize winning journalist Glenn Greenwald, it’s how they made their millions:4

“If you think it’s fine and normal that the Speaker of the House’s personal wealth tripled to $115 million ever since financial disclosures were required (2004), that’s fine, but the issue is how that money was made. It was from companies directly affected by her actions.”

In the last two years, nearly 75% of Pelosi’s stock trades have involved Big Tech stocks, totaling over $33 million in trading. “That has happened as major legislation is pending before the House, controlled by the committees Pelosi oversees, which could radically reshape the industry and laws that govern the very companies in which she and her husband most aggressively trade,” Greenwald wrote in a blog.5

Pelosi’s most traded company was Apple, accounting for 17.7% of her trades. But unlike most people buying and selling Apple stock, Pelosi had the privilege of speaking privately with Apple CEO Tim Cook on at least one occasion to discuss the company’s standing and how it could be affected by pending bills relating to Silicon Valley reforms.

The call in question occurred just days after antitrust reform legislation was introduced. Big Tech pushed back, and Cook called Pelosi directly to voice his concerns. Pelosi, according to The New York Times, then asked him which measures he specifically objected to.6,7 Greenwald reported on the blatant conflict of interest:8

“Sources who refused to be identified tried to convince the Times’ reporters that ‘Ms. Pelosi pushed back on Mr. Cook’s concerns about the bills.’ But in doing so, they confirmed the rather crucial fact that Pelosi was having personal, private conversations with the CEO of a company in which she and her husband were heavily invested and off of which they were making millions of dollars in personal wealth.

And Pelosi, according to the report, asked Cook what changes were needed to avoid harming Apple and other Silicon Valley giants.”

Greenwald also revealed that Pelosi’s five most-traded stocks in the last two years — Apple, Microsoft, Facebook, Amazon and Google — were those that stood to be most affected by pending legislation, and not just any legislation, but legislation that she was working to negotiate and work through Congress.

Four of the companies — Apple, Amazon, Facebook and Google — were directly identified by the House Antitrust Subcommittee as being monopolies, making their futures heavily dependent on the pending legislation. According to Greenwald:9

“Beyond that, Google — one of the companies in which the Pelosis’ stock trades have made millions — is one of the top five donors to the House Speaker.10 The wealthy couple buys and sells in Google stock, making millions. She works on bills that directly affect the future trajectory of Google. And they lavish her campaign coffers with cash, a key source of her entrenched power.”

Meanwhile, Pelosi’s husband, Paul, purchased risky options in Alphabet, the parent company of Google, in February 2020, which he sold in June, netting more than $5 million in profits.11 The purchase was made, Greenwald wrote:12

“… right before the market began plunging due to the COVID epidemic and right before the House, led by his wife, was set to introduce new legislation to regulate those same tech companies. Yet even as the prices in several of those companies plummeted, Paul Pelosi held onto them, only to sell them last June at a massive profit.”

He also cited two other “disturbing incidents” in which Paul Pelosi had impeccable timing with his investment decisions, including exercising nearly $2 million worth of Microsoft call options within two weeks of a Microsoft contract to supply the U.S. Army with augmented reality headsets. The other incident involved the purchase of about $1 million in Tesla stock after calls made prior to the government announcing incentives it would offer to promote the shift toward electric vehicles.13

“In response to media inquiries, Greenwald reported, Pelosi denied that she is involved in or even has knowledge of her husband’s stock trading. There is, of course, no way to confirm or disprove that, but what is clear is that the vast wealth generated by those stock trades in companies Pelosi greatly affects — and about which she clearly has non-public information — directly enriches Pelosi herself.”14

Not every lawmaker had filed annual financial disclosures at the time of OpenSecrets’ latest report, including Sen. Kelly Loeffler, R-Ga., who has an estimated worth of over $500 million.15

She and her husband, New York Stock Exchange chief executive Jeff Sprecher, came under fire for suspicious stock trades worth between $1.2 million and $3.1 million that occurred immediately after a “closed-door coronavirus briefing in late January” 2020.16 Among them:17

Loeffler denied using confidential information from her Senate duties to make a private profit but announced in April 2020 that she and her husband were liquidating their stock holdings and “moving into exchange-traded funds and mutual funds.”18 In other suspicious instances:

Sen. Richard Burr, R-N.C., chairman of the Senate Intelligence Committee, who receives frequent briefings about potential U.S. threats, also dumped stock, including in hotel companies, worth up to $1.7 million in late January 2020.

“As Intel chairman,” Burr “got private briefings about coronavirus weeks ago,” Rep. Alexandria Ocasio-Cortez, D-N.Y., tweeted at the time. “Burr knew how bad it would be. He told the truth to his wealthy donors while assuring the public that we were fine.”19 Sen. Dianne Feinstein, D-Calif., and Sen. James Inhofe, R-Okla., also sold stock after Intelligence Committee briefings.20

How Is This Legal?

Corruption runs deep in politics, with Big Tech and Big Pharma giving campaign money to politicians who in turn receive non-pubic information about the corporations that can be used to enrich their personal stock portfolios. The lawmakers then have influence over legislation that affects the companies in which they’re personally invested.

Politicians are supposed to be performing a public service, but once they’re out of the public eye, many go on to serve as lobbyists or work in the corporate world. This means that during their tenure, they don’t want to close doors that may help them once they’re no longer in politics.

The system is such that most politicians aren’t fighting for the public but, rather, are looking out for their own self-interest and wealth accumulation. Case in point: There were 1,502 pharmaceutical lobbyists in 2020, 63.91% of whom were former government employees.21

A revolving door, in which government employees and former members of Congress take jobs with lobbying firms, is common among lobbyists, and the reverse also occurs, in which people from the private sector end up in government positions. How is this legal? As Greenwald explained, unless insider trading can be proven, this type of “lucky” trading that is building the wealth of numerous politicians will continue:22

“While the trades cannot be declared illegal unless it can be proven that either Pelosi acted on non-public information — in which case it would be the felony of insider trading — the ethical stench is obvious.

Just as was true when numerous Senators from both parties sold stocks in COVID-related industries before the pandemic began — raising questions about whether they had advance knowledge of what was coming through classified briefings — watching Nancy Pelosi’s wealth skyrocket by millions of dollars from trades in the very companies she is directly overseeing creates a sleazy appearance, to put that mildly.”

Politicians are in good company, as top health officials also cash in on stock options tied to the companies they oversee. For instance, Dr. Julie Gerberding — director of the U.S. Centers for Disease Control and Prevention from 2002 until 2009, who after leaving the CDC became president of Merck’s vaccine division in January 201023 — sold half her Merck stock options for $9.11 million in January 2020.

In March 2020, a group of legislators introduced the Ban Conflicted Trading Act to “prohibit members of Congress and senior congressional staff from abusing their positions for personal financial gain through trading individual stocks and investments while in office or serving on corporate boards.”24

“Members of Congress should not be allowed to buy and sell individual stock,” said Ocasio-Cortez. “We are here to serve the public, not to profiteer.” Senator Jeff Merkley, who introduced the Act to the Senate, added:25

“Buying and selling stocks while making decisions that affect the stock’s value is inherently a conflict of interest. At best, it can seriously degrade public trust — as we are seeing today. At worst, it’s a blatant abuse of power.” 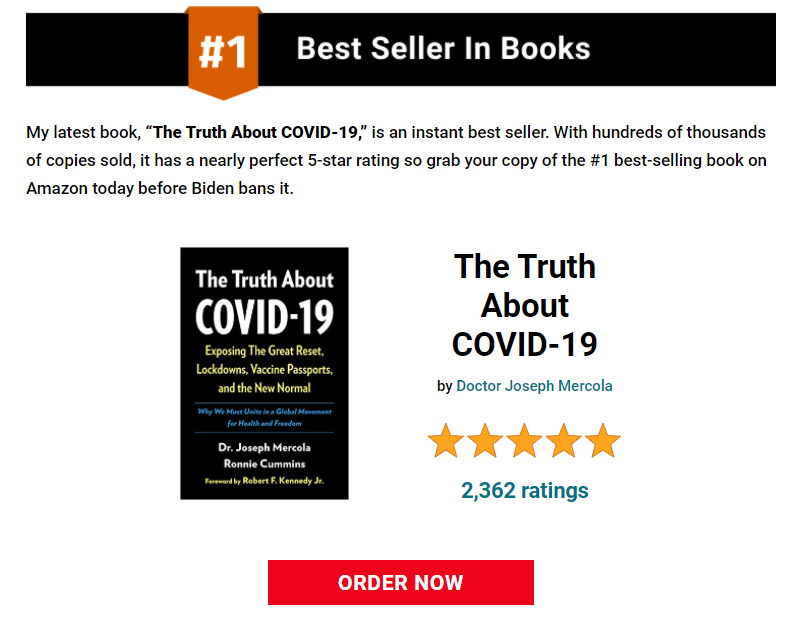