While We Were Sleeping, Ted Cruz Saved America from Democrats’ Election Takeover 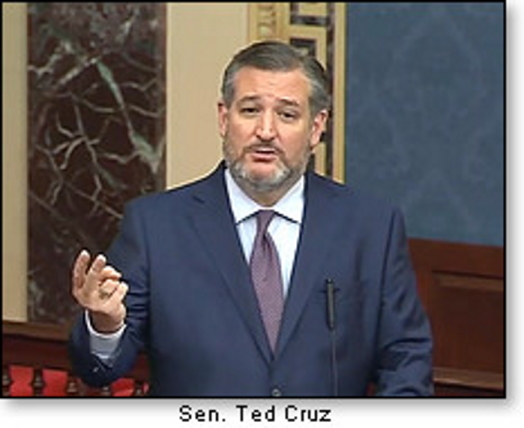 While We Were Sleeping, Ted Cruz Saved America from Democrats’ Election Takeover

At 3:30 on Wednesday morning, following 15 hours of amendment votes on the Democrats’ $3.5 trillion human infrastructure bill, morally bankrupt Senate Majority Leader Chuck Schumer tried to force a vote on the For the People Act by unanimous consent, according to The Houston Chronicle.

Immediately, Republican Sen. Ted Cruz of Texas took to the Senate floor to deliver precisely the smackdown that Schumer deserved.

The Chronicle reported that Cruz “objected repeatedly,” calling the legislation “a federal government takeover of elections” and a “massive power grab by Democrats.” The “back-and-forth” with Schumer lasted for about 15 minutes.

Cruz told colleagues, “This bill would constitute a federal government takeover of elections. It would constitute a massive power grab by Democrats. It would disenfranchise millions of Americans and it would do precisely the opposite of its nominal title, ‘For The People.’ It is, instead, for the politicians because it entrenches politicians and ensures that the people cannot vote them out of office.

“It would strike down virtually every reasonable voter integrity law in the country, including voter ID laws supported by the overwhelming majority of this country, including prohibitions on ballot harvesting, again widely supported by people in this country. It would mandate that felons be allowed to vote, and it would automatically register millions of illegal aliens to vote. It would profoundly undermine democracy in this country, and for that reason, I object.” 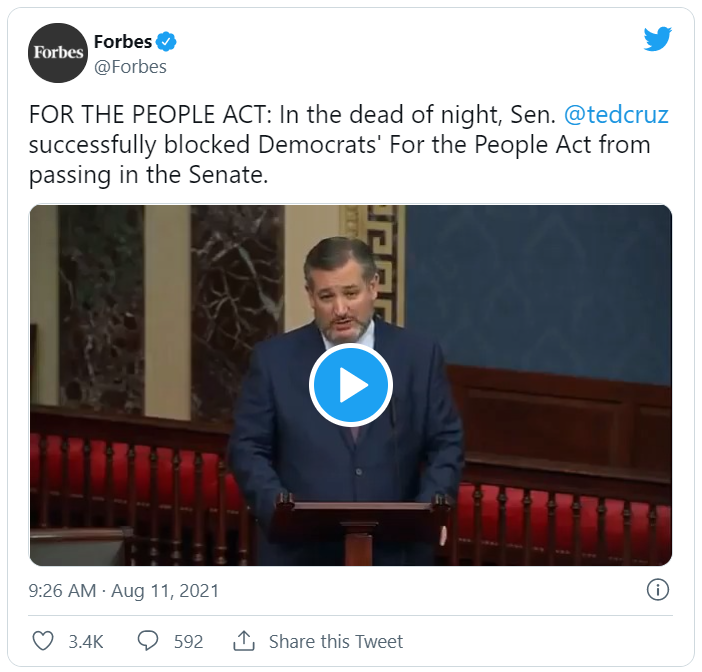 Senate Minority Leader Mitch McConnell also objected strenuously to Schumer’s move to sneak the bill through a weary Senate. In his remarks, he said, “Maybe this is just concluding the night with a little comic relief.” 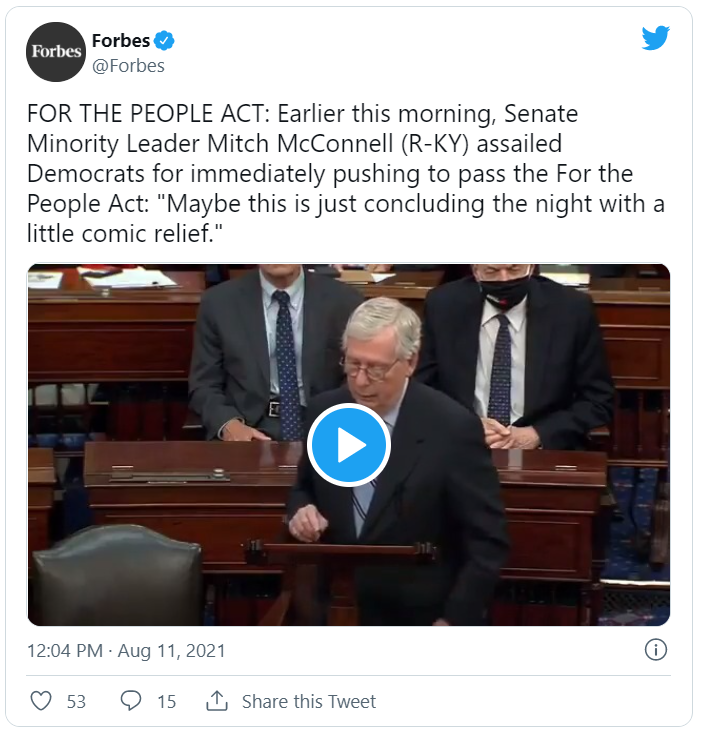 Having been well pleased with the flexibility in voting methods the pandemic allowed them, and certainly with the results of the 2020 election, Democrats would like to make these changes permanent. The result is the For the People Act of 2021, also known as HR 1 or S 1, which would essentially federalize U.S. elections. Among its many dangerous provisions, this bill would eliminate voter ID laws.

As the Texas state House of Representatives prepared to take up new voter integrity legislation in July, the majority of House Democrats fled the state to deny the chamber the quorum necessary to pass the bill.

They headed to Washington, D.C., where they have been lobbying Democratic leaders to pass the For the People Act. They had hoped to force a vote on the bill.

Cruz’s strenuous pushback essentially killed the chances of that happening, at least for now.

Schumer “acted in the predawn hours under sharp demands from activists, elected officials and voters in states where Republican legislators have passed new voting restrictions,” The Washington Post reported.

Following the 4 a.m. brouhaha on Wednesday, Schumer said, “Let there be no mistake about what is going on here. We have reached a point in this chamber where Republicans appear to oppose any measure — any measure, no matter how common sense — to protect voting rights and strengthen our democracy.”

Schumer vowed to take up “voting rights” when the Senate reconvenes following the summer recess.

I don’t quite know what he thinks will be any different one month from now. It’s a terrible bill from beginning to end; there’s no part of it where the two parties could hope to find common ground. Republicans remain adamantly opposed to the democracy-crushing bill.

The all-night session marked the end of the summer session and the Senate adjourned until mid-September.

The Texas Tribune reported Washington is currently a “legislative ghost town.” Although several Texas Democrats returned to the state this week, it’s unclear if the others will remain in D.C. or follow their fellow state congressmen home. Will they return to Texas where 52 arrest warrants await their arrival? That’s yet to be determined.