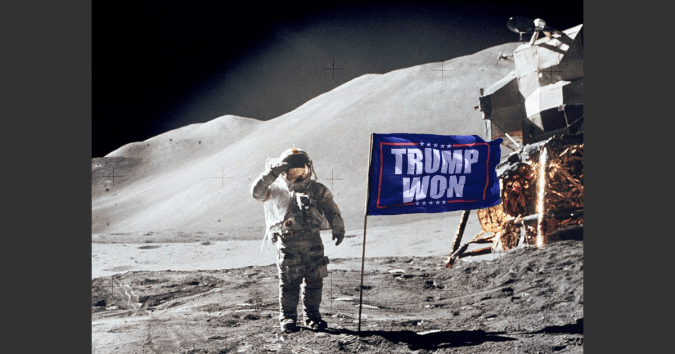 We must be “Digital Paul Reveres”

Many have been tamping-down hope that the duly-elected President (Donald J. Trump) can be returned from exile and restored to office.

Many of those pooh-poohing the idea that the legitimate President can be reinstated may be acting in good faith.  But most are not – they are trying to make the installation of the unelected Biden-Harris Junta a fait accompli, and trying to cause a critical mass of the public to just “move on,” even those who suspect that the election was stolen.

Key to the bad guys’ efforts has been the immediate (and near universal) media and politician (of both parties) mantra that 2020 was a “free and fair election.”  This “big lie” is increasingly vulnerable, thanks to the audits underway in Maricopa County, Arizona and elsewhere, and the courageous work of Mike Lindell.

The media and politicians have been complicit in a conspiracy of silence to suppress coverage of the audits  They are already signaling that “Plan B” for this conspiracy is to (try to) discredit the audit results once they are released (memory-holing the fact that a not so long ago Democrat-leaning documentary Kill Chain decried the cyber-vulnerabilities of our election machines): we’re already being subjected to mischaracterizations that the auditors are incompetent and/or partisan, or that the results are “flawed.”

Some cite the lack of clear procedural avenues to restore the duly-elected President, given the unprecedented circumstances.  The procedural question is true, to a point – but think about it: are we supposed to leave a fraudulent regime in office merely because the procedural steps for a duly-elected administration were (on paper) followed? THAT is ridiculous on its face!

Others will express lack of confidence that the U.S. Supreme Court – which up until now has demonstrated alliance with the November 3rd Coup – is capable of actually dispensing justice (a concern not without merit, to be sure)!

Others surmise that the Deep State – many of whose players, as enemies domestic, potentially face conviction for treason (and execution) over their involvement with the November 3rd Coup, and so are highly motivated to oppose any counter-revolution – are simply too powerful and will not allow it to happen.

In addition to firing squads, perhaps we could offer those convicted of treason the option of suffocation by a My Pillow held over their face.

Yes, we are on the post-coup side of the November 3rd Coup by an alliance of enemies foreign and domestic; we have (at least for now) lost the high ground, i.e., the White House.

Yes, this post-coup side of the November 3rd Coup has made undeniable that all, or nearly all of our major institutions are thoroughly corrupt, with many individuals and institutions directly compromised by the Chinese Communist Party (CCP).

Yes, there are no clear institutional pathways for reinstatement of the legitimate President (and presumably several members of Congress as well); the Founding Fathers did not envision that we would be subjected to a “color revolution.”

But let us not get wrapped around the axle on lack of existing procedural steps – JOB #1 is proving that the election was stolen, and making sure that the majority of the American public is aware of this.

Once the election fraud is exposed, the mechanism by with the November 3rd Coup was accomplished revealed, must not the “conventional wisdom” shift to:

By what moral or legal grounds can an unelected CCP-puppet regime be allowed to remain in office, and all its actions from since installed not declared null and void?

From there, we can work out the procedural mechanisms for restoring our Constitutional Republic. 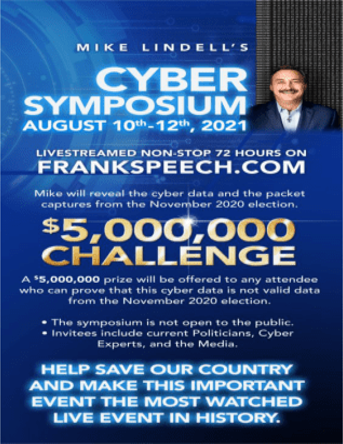 Everyone Must Now Be a “DIGITAL PAUL REVERE”

Mike Lindell, who may well go down in history as one of our greatest heroes, at least on par with Paul Revere, is about to “show the receipts.”  He has scheduled a “Cyber Symposium” for August 10-12, 2021.  He says that he has Internet “packet” information proving that (amongst others) the Chinese Communist Party (CCP) and enemies domestic not just interfered with the elections in all 50 states, but indisputably stole the Presidential election. (Along with House and Senate seats?)

Mike Lindell is so confident of his data, that he’s offering a $5 million dollar reward to any duly-accredited cyber expert who can disprove it.  The entire event is going to be livestreamed so that people around the world can watch and monitor.  Mr. Lindell, out of his own pocket, has paid for ads to promote the event.

This is not a stupid man – would he do this publicly, and risk both losing that sum and being very publicly humiliated, without having done his due diligence to make sure that he had the goods?

By the time of the Cyber Symposium, or soon after, we’ll likely have (at least preliminary) results from the Maricopa County (Arizona) audit.  That audit has already been the catalyst for forensic audits in other of the “battleground” states that mysteriously stopped counting ballots on November 3-4, 2020.

Here’s where we “Digital Paul Revere’s” come in.

If the CCP puppet regime is allowed to stay in power through the 2022 election, much less the 2024 election, the subversion and “fundamental transformation” of our Constitution Republic will be irreparable – we will have crossed the point of no return on the way to being a Socialist, Communist or other form of totalitarian country.

WE WHO ARE AWARE OF THE COUP AND THE ELECTION FRAUD THAT ENABLED IT MUST SADDLE UP AND RIDE!

The media (and politicians) have already signaled that they are going to try: a) to suppress knowledge of the emerging evidence of “the steal” by avoiding coverage of it, and b) where that is not possible, report not facts but characterizations (e.g., “debunked” “conspiracy theory” “amateur”) to dissuade people from even considering the evidence and then weighing it on its merits.

Since November 3, 2020, the news outlet wheat and chaff has sorted itself out – by how it reported OR DECLINED TO REPORT information about the steal.  Fox News, for instance, showing that it is (at a minimum) an accessory to the November 3rd Coup and the subsequent coverup of it.

Sources that have shown we can rely upon them are (listed in alphabetical order): Bannon’s War Room / Real America’s Voice (reruns and highlights available on Rumble after the broadcast); Conservative Treehouse; Epoch Times; Frankspeech; Gateway Pundit; National Pulse; One America News and Revolver News.  There are others, but this is an excellent start – it is highly recommended that you check the web sites at least once daily, and consume as many of the broadcasts as time allows.

THEN SHARE SIGNIFICANT PIECES (FORWARDING ARTICLES AND LINKS) WITH FRIENDS, RELATIVES, COWORKERS, AS FAR AND WIDE AS YOUR REACH ALLOWS.

This is how we can bypass and nullify that media and politician “conspiracy of silence.”  It is up to us to “woke” our fellow citizens to the reality of the coup executed against our Constitutional Republic!

IF we achieve a critical mass of awareness amongst our fellow citizens, and if enough of us ask for help from our God, our land can be healed and our duly-elected President reinstated.

COULD WE FIND OURSELVES EMBROILED IN A HOT CIVIL WAR?

If the duly-elected President is not reinstated after the November 3rd Coup is proven, will patriots assume the role of counter-revolutionaries, and our current “cold civil war” turn hot?  It would seem that the Deep State and its coup-conspirators are afraid of that very thing, and scheming to counter it.

Let us pray not.

The window for elected officials to continue peddling the “big lie” that “there was a ‘free and fair’ election” is rapidly closing.  The longer they delay aligning with the truth, the greater their culpability for being accessories (at a minimum) to the November 3rdCoup, and treason inherent in it.

With God’s help, may they come to realize that the exposure of what they did signals that their coup has thus failed, that bloodshed would be futile – will repent their sins to our Lord – and will stand down as our Divinely-inspired nation is resurrected as a Constitutional Republic.

Pray for such a result, and do your part as a “Digital Paul Revere” to help make it happen.

I am the author of the book Communiqués From the Vast Right-Wing Conspiracy – available on Kindle (only $2.99) and in paperback (only $12.99). Please consider enjoying my work by purchasing and reading. Thank you.