Spanish farmers fight forest fires with agroforestry (and many sheep)

Spanish farmers fight forest fires with agroforestry (and many sheep)

GALICIA, Spain — The forest fire stopped just before arriving at Nieves Fernández Vidueira’s farm, but it burned all day in the area surrounding Quintela do Pando in Galicia, northwestern Spain.

“I will never forget the terror that I felt,” Fernández said. “When we woke up we couldn’t even breathe, everything was covered with smoke, it seemed like night, chunks of scorched bark fell from the sky.”

Fernández, 59, is a shepherd and poet who says she will always remember Oct. 16, 2017, when all the neighbors went to the nearby village of Fradelo to help the firefighters. “The trees made a terrible noise and fell to the charred ground. I saw rabbits and roe deer escaping from the fire, people cried all around. Right now, I still cry when I remember it.”

During that time, Galicia experienced an unusual heat wave, as happened in other parts of the Iberian Peninsula. “Many hectares were destroyed during a day of flames and the fire stopped at an area of chestnut trees grazed by sheep, surrounding my field. Livestock are a fundamental part of forest fire prevention, by eating the grass in the undergrowth, and highly combustible lichens on the trees,” Fernández said.

That day, she composed a poem to express feelings of sadness and impotence after seeing the woods transformed into a dark desert.

Nieves Fernández Vidueira among her 400 sheep grazing in the agroforestry system. Image by Monica Pelliccia for Mongabay. 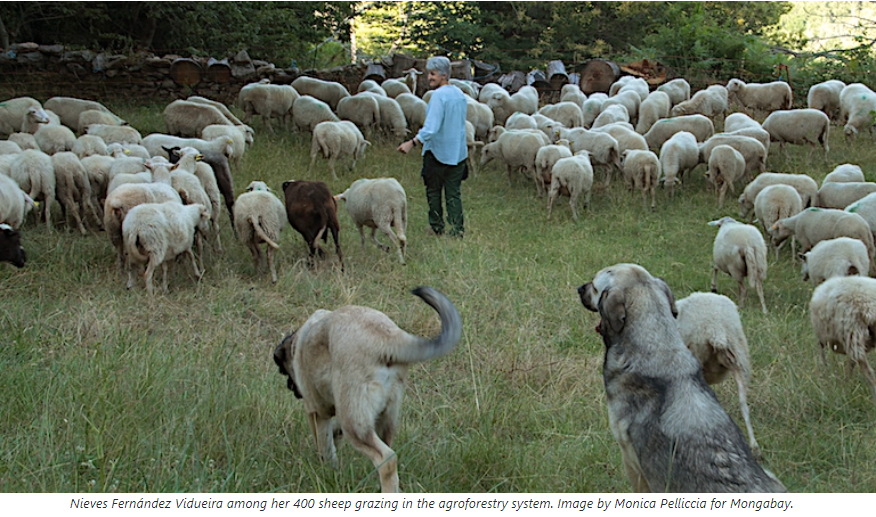 Fernández became a shepherd at 19 when she was expecting her first son. She decided at the time to leave Madrid and come back to Quintela do Pando, where she grew up.

“In the past, practically only men worked as shepherds: a woman like me broke all the existing patterns. Then, if in the meantime sheep are grazing, you bring with you a knife and carve wood toys for your children [as I was used to] you break all the molds,” she explains.

It all started with the 18 sheep owned by her grandmother. Now she has 400 Galician sheep, or ovella galega, a breed classified as in danger of extinction, grazing among chestnut trees (Castanea sativa), oak (Quercus robur), elm (Ulmus spp.) and hazelnut (Corylus spp.). The sheep eat lichens and bushes such as tojo (or gorse, Ulex europaeus), brezo (heather, Erica ciliaris), and xesta (Scotch broom, Cytisus scoparius).

This is a kind of agricultural system called agroforestry because it’s done among trees, which cool the surroundings, provide habitat for biodiversity, and promote humidity that helps crops like hay and grains grow even in dry conditions. The trees in an agroforestry system also sequester carbon from the atmosphere to cool the atmosphere. In this case, since livestock graze between the trees, it’s also called silvopasture, which is an ancestral farming system typical of Galicia.

Fernández’s farm is self-sufficient, producing sustainable forage for its sheep and selling meat and chestnuts. Every evening as she brings the sheep to graze and sits under the old chestnut trees, Fernández also writes poetry; designs clothes made with lichens and leaves and inspired by the Celtic mythologies deeply rooted in this area; and carves sculptures from tree branches to portray life through the lens of nature. In her handicrafts, one also finds stories of the meigas, witches whom local folklore ascribe to these woods. Her work is exhibited in a tiny museum in the center of the village.

“Being a shepherd inspires me, makes me feel free, that I’m part of nature,” Fernández says.

In 2017, a forest fire burned all day around Quintela do Pando. Image courtesy of Nieves Fernández Vidueira. 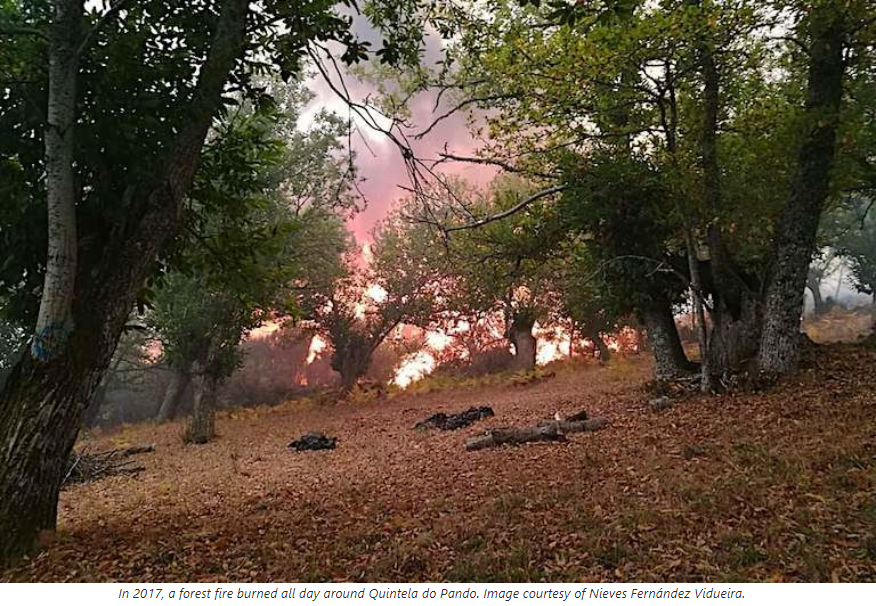 In Galicia, researchers observed a significant change in summer days over recent decades. “In the region, as in Spain, temperatures have risen by 1.7° [Celsius, or 3° Fahrenheit] since 1970. They are having great oscillations, with warm periods, followed by cold ones,” explains Dominic Royé, physical geography researcher at USC.

Many variables influence this, as Royé explained in a paper published in 2020. “Climate variability leads to years with more or less forest fire activity due to more favorable conditions. We must understand that a drought followed by heat waves greatly increases the risk,” Royé says. “The easterly winds in Portugal and Galicia are dry and warm in summer, dramatically increasing the risk of forest fires, and a few fires could burn huge areas.”

How’s the weather? ‘It depends’

North of here, the winding road passes through rivers and villages with few inhabitants nestled in hills colored by the violet flowers of heather, known locally as brezo. News of the forest fires tearing through the U.S. West Coast dominate the radio bulletins on the car stereo: tales of flames worsened by climate variability, a global issue that is part of the climate crisis.

“Depende [it depends], it’s a word that represents part of our character,” Mosquera-Losada says. “As Galician people we are well-known [as] undecided. Right now, depende is also our attitude to climate variability. We have more summer days but you’ll never know how the weather will be: extremely cold, rainy or windy.” 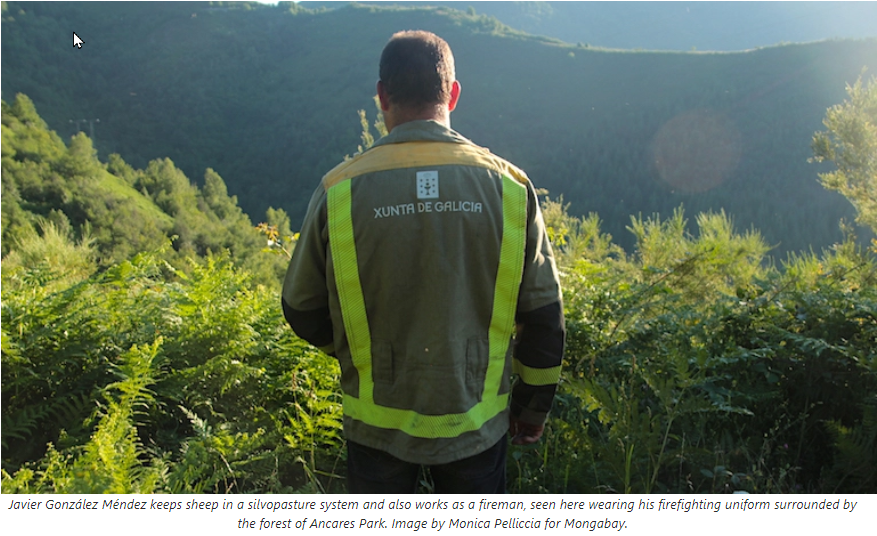 See related by this reporter: Young farmers apply ancient agroforestry practices in the heart of Sardinia

Indeed, local shepherds have observed weather changing very much during recent decades. “Depende is a good answer to identify our weather,” says Javier González Méndez, 43, who works as a firefighter by day and as a shepherd in the evening, taking care of 45 rubia gallega cattle, a breed native to Galicia.

The youngest of seven siblings, Javier González became a fireman at 18, and is the only one of them still living in the village of Robledo de Domiz, here in the heart of Galicia.

After he sheds his firefighter uniform, he brings the cows to the Os Ancares Mountains. Climbing up to 1,600 meters (5,250 feet), they graze in a silvopasture system with oak, birch (Betula pubescens), hazelnuts (Corylus avellana), holly (Ilex aquifolium), cherry (Prunus avium), teixo (or yew, Taxus baccata), and bushes such as uz branca (Erica arborea), xesta, and cardo (thistle, or Cirsium vulgare). There are also medicinal plants such as arnica (wolf’s bane, Arnica montana) and lemon balm (Melissa officinalis). These mountains are also the last redoubt of brown bears (Ursus arctos) in Galicia, which González reports meeting several times on the nearby peak.

If just one remains, who will take care of these woods?

“Rubia ven acá” — Blondie come here — González calls out to gather each of his cows, most of them a light brown or cinnamon color. He gives each of them a proper name, such as Rubia or Marella.

When they graze on the mountaintop, he follows them on his mobile phone, thanks to GPS chips in their collars. Over the years, he says, “I saw forest fires each time more intense, since there is less flock cleaning the mountains,” he explains, walking in an area that was razed to the ground by a forest fire. That occurred in October of 2017, when 2,000 hectares (nearly 5,000 acres) burned in a week. Oak and birch skeletons still remain as testimonies to the blaze.

His flock does the work that’s needed more than ever because the forest fire season just began. Last year, 14,805 hectares (36,584 acres) burned in Galicia, more than in 2018 and 2019 combined, according to the latest governmental statistics.

Galicia has the highest density of forest fires and largest burned area in Europe, according to USC research coordinated by Mosquera-Losada. “There are three conditions that make fires happen: temperature over 30°[C, or 86°F], 30-plus percent humidity, and wind speeds superior to 30 km/h [19 mph],” she says. “These conditions are more frequent due to climate variability.”

Gemma San Pedro Jiménez cuddles her border collies in as her goats graze the silvopasture system under pine and eucalyptus. Image by Monica Pelliccia for Mongabay. 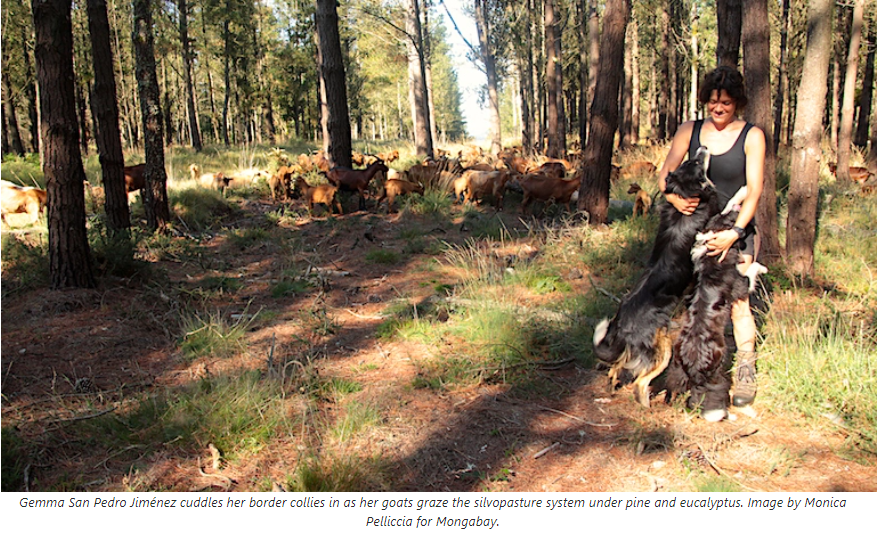 Going north and west in the direction of Lugo, the landscape changes. Pine trees (Pinus pinaster) and eucalyptus (Eucalyptus globulus) emerge from a landscape covered by light early-morning fog.

“When I arrived here, I was 30, just divorced and a single mother of a little girl of 4. All the people said I won’t last long with my goats,” says Gemma San Pedro Jiménez, 42, now a goatherd for the past 11 years. “Nobody had expectations of me. They would say: what are you doing here with goats? But I’m still here and I’ll remain with my goats.”

Her house is in front of the paddock containing a flock of 400. Originally from Barcelona and after with a forest engineering degree from Lugo University, San Pedro Jiménez decided to become a goatherd when her mother inherited 50 hectares (124 acres) of pine woods in the area surrounding the village of Borreiques.

Every evening she brings her goats to the woods; they take different routes through the pines, which filter the light and draw kaleidoscopic shadows on the undergrowth. They graze in an agroforestry system among eucalyptus and oak, known locally as carballos, looming above tojo, brezos and xesta bushes.

Younger people like her are returning to such depopulated areas, making a choice with social and ecological implications, as is also happening in Sardinia. “Rural abandonment and the consequent abandonment of traditional uses, together with the increase in forest area lacking forest management, forests adrift due to increasingly noticeable climate change, and the lack of protection measures in rural households are the perfect spark to start the forest fire disaster every year,” according to a WWF report focused on the Mediterranean.

Taking care of this forest is a daily challenge for San Pedro Jiménez. “Consumers have to understand and support the work of shepherds, changing their habits, considering that eating meat produced in this condition has strong social and ecological values. Prices are the same for 30 years and it’s not easy to survive,” she says, cuddling Chis and Jazz, her border collies. “I wish that we could be more and more working in this way, to make our voice heard.” 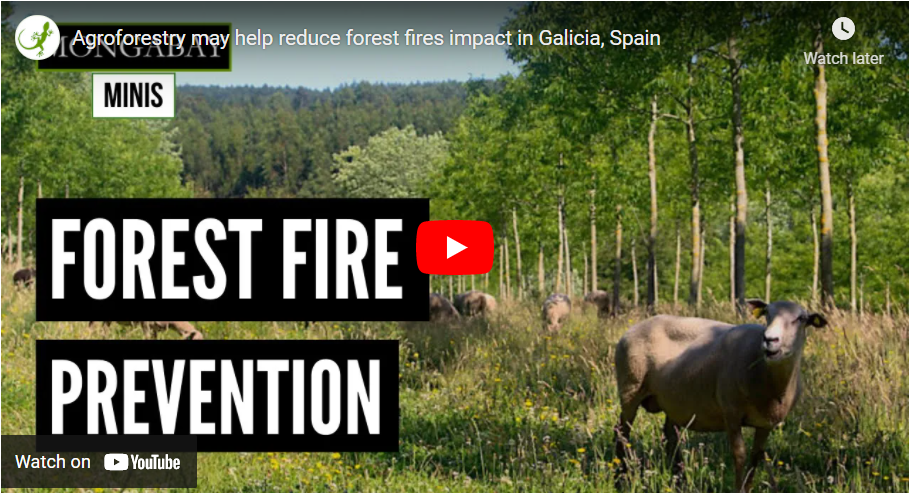 Moving west from the San Pedro Jiménez farm toward Santiago de Compostela, some pilgrims appear. COVID-19 restrictions earlier forced the suspension of the Camino de Santiago pilgrimage, but the pilgrims are now back walking the trail.

In Boimorto, 30 km from Santiago de Compostela, some pilgrims on foot and others on bikes have found shade under cherry and walnut trees that comprise the silvopasture system of a local timber enterprise called Bosques Naturales.

The economic sustainability of the agroforestry system is crucial: with silvopasture, the researchers report savings of more than 20,000 euros ($23,500) in pesticides and related costs at Bosques Naturales, thanks to the forage that grows well in the trees’ shade. They are also experimenting with other crops to further boost the farm’s economic sustainability, such as hemp for textiles.

The agroforestry system at Bosques Naturalness in Galicia, Spain, is composed of alley cropped walnut trees, bushes, and sheep that keep the undergrowth trimmed. Image by Monica Pelliccia for Mongabay. 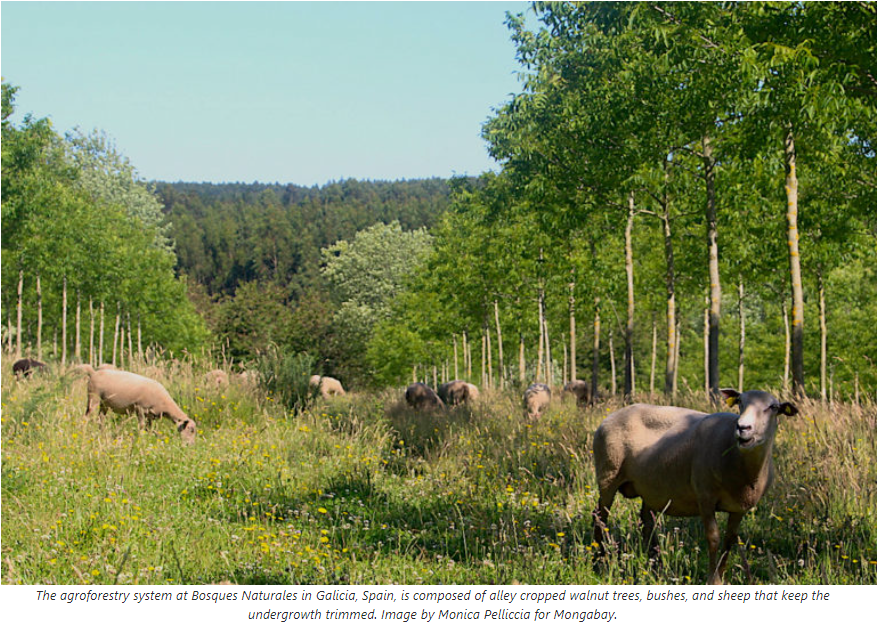 Shepherds as a forest fire solution

The shepherds of Galicia are working hard to find a balance between their work among silvopasture systems and long-term sustainability.

“They need more administrative support to recognize the importance of their work,” says USC’s. Mosquera-Losada. “Adequate management of the mountains with shepherding could be part of the solution to preventing fires. They understand nature and they are living examples of the solutions.”

This opinion is shared by the shepherds such as Nieves Fernández Vidueira. “Local administration should support people that work with a farm and take care of the mountains,” she says. “Forest fires are prevented with livestock, that is crucial. They have to invest in prevention.”

Yet her village is home to just 18 inhabitants, none of them young. “If the people keep leaving,” she asks, “who will protect the woods?”

Monica Pelliccia is an independent multimedia journalist. Follow her work on Twitter via @monicapelliccia. View all of her reports for Mongabay here.

This feature is part of Mongabay’s ongoing series about agroforestry.