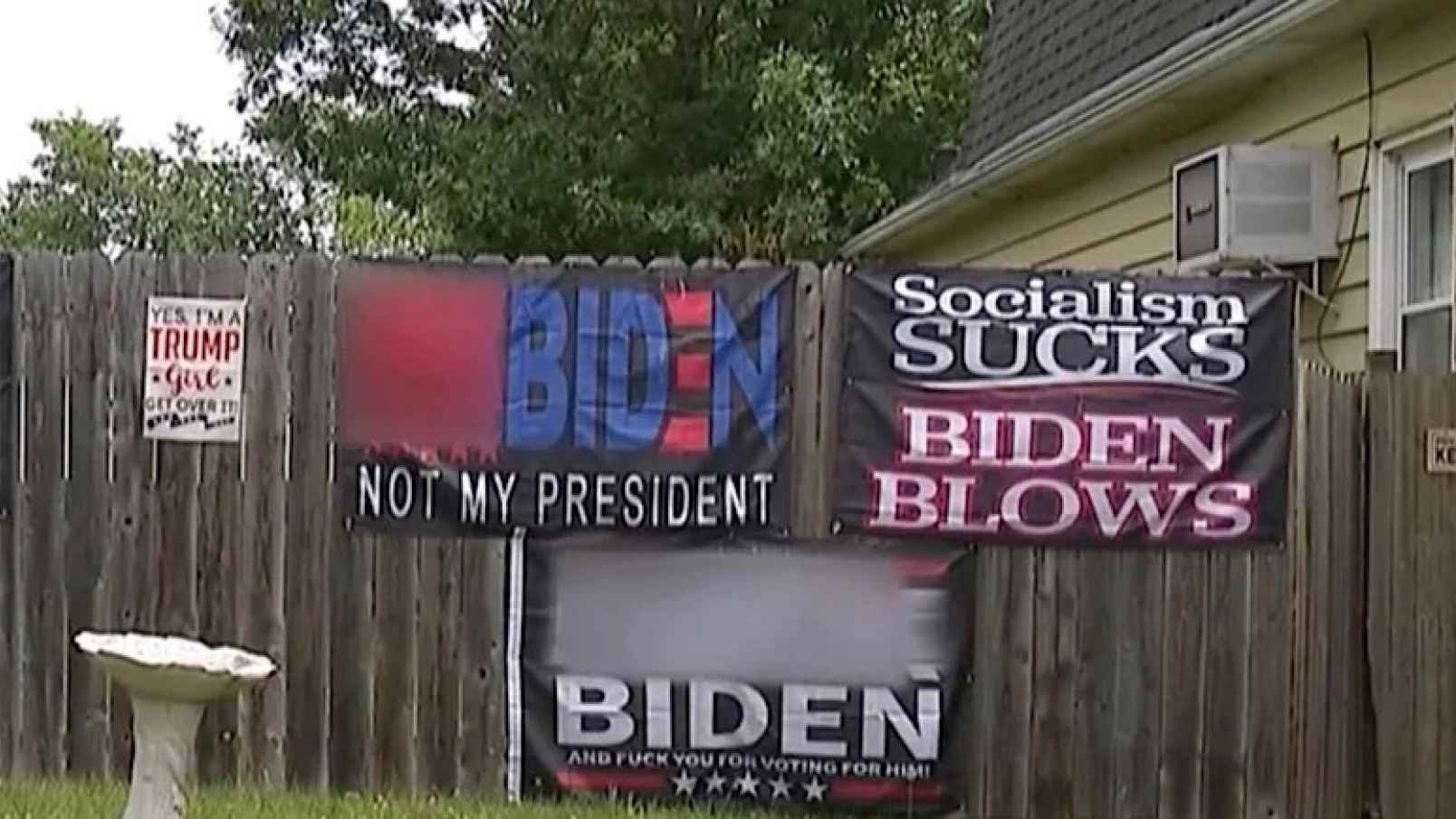 Even the New York Times and ACLU got it right for once.

Once in a blue moon the New York Times editorial board and the American Civil Liberties Union step outside of their usual ideological comfort zone and stand up for the equal application of the law. This happened recently when both left-wing progressive organizations, in a rare show of principle, defended the right of an avid Trump supporter to display banners on a fence outside the house where she lives, despite the banners’ crude language denouncing President Biden.

The Times’ editors and the New Jersey affiliate of the ACLU objected to efforts by Roselle Park, New Jersey town officials to force a woman to remove certain banners they found offensive. The officials claimed that neighbors had complained about the crude language on the banners. They also expressed concern that children walking by the house to a nearby school could be exposed to the profanity. The officials issued the woman’s mother, who owns the house, a summons to appear in borough court for violating a local obscenity ordinance. The owner faced daily fines if she did not take the offending banners down.

The judge who first heard the case sided with the town, asserting that “Freedom of speech is not simply an absolute right.” He added that “the case is not a case about politics. It is a case, pure and simple, about language.”

This local judge either did not do any research before issuing his ludicrous ruling or he decided that he could override the U.S. Supreme Court. The Supreme Court ruled decades ago that the use of the same crude word displayed on the banners was constitutionally protected under the First Amendment in the context of political speech, whether or not some people found the word offensive.

After the New Jersey ACLU affiliate joined the case on the Biden basher’s behalf, the town retreated. The state Superior Court of New Jersey then dismissed the town’s charges. “The First Amendment exists specifically to make sure people can express strong opinions on political issues, or any other matter, without fear of punishment by the government,” Amol Sinha, the executive director of the ACLU’s New Jersey chapter, said.

These guidelines questioned the ACLU’s historic commitment to protect freedom of speech in situations that “may raise tensions with racial justice, reproductive freedom, or a myriad of other rights, where the content of the speech we seek to protect conflicts with our policies on those matters, and/or otherwise is directed at menacing vulnerable groups or individuals.”

As Wendy Kaminer of the Wall Street Journal explained, “The speech-case guidelines reflect a demotion of free speech in the ACLU’s hierarchy of values. Their vague references to the ‘serious harm’ to ‘marginalized’ people occasioned by speech can easily include the presumed psychological effects of racist or otherwise hateful speech, which is constitutionally protected but contrary to ACLU values.”

“Where is the comparable set of guidelines explaining when the ACLU should decline to defend gay-rights claims that infringe on religious liberty or women’s-rights cases that infringe on due process?” Ms. Kaminer asked rhetorically.

As for the Roselle Park case, it never should have been brought in the first place. Even the New York Times acknowledged in its July 24th editorial, entitled “It Is Every American’s Right to Curse the President,” that the Trump supporter’s First Amendment rights were clearly violated in this case. “Americans, especially judges, have an obligation to know the law,” the New York Times editors wrote.

However, after this rare departure from leftist dogma, the New York Times editors returned to their left-wing ideological corner. The editors complained that “political violence, especially by right-wing extremists” had contributed to “a growing impatience with the distinction between speech and violence.” The editors skipped over the left-wing riots during the summer of 2020 that saw assaults, arson, destruction of property, attacks on federal government buildings, and looting.

The Times’ editors also reiterated their strong disagreement with the Supreme Court’s “view that corporate spending on political campaigns is a constitutionally protected form of free speech.” The editors are too self-involved to understand that it is fundamentally unfair to only protect the right of corporate media-owning giants to write or say anything they want about a political candidate while prohibiting other corporations from participating in the public conversation through campaign ads that express their political views.

The left-wing progressive New York Times and ACLU do not deserve the trust of fair-minded Americans. However, even a broken clock is right twice a day.
​By frontpagemag.com