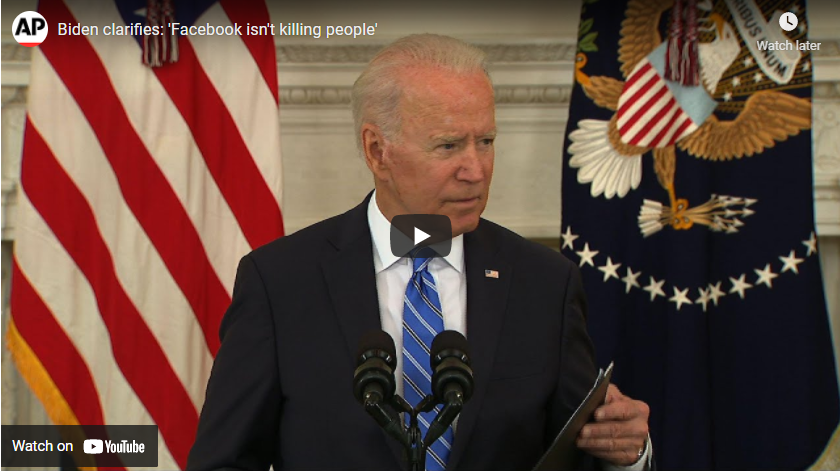 July 24, 2021, The New York Times upped the ante on the dark money witch hunt against critical thinkers by publishing an article1 that states I am “The Most Influential Spreader of Coronavirus Misinformation Online.” The article was also republished in many other media outlets; it reads, in part:2

‘Mercola is the pioneer of the anti-vaccine movement,’ said Kolina Koltai, a researcher at the University of Washington who studies online conspiracy theories. ‘He’s a master of capitalizing on periods of uncertainty, like the pandemic, to grow his movement’ …

President Biden has blamed online falsehoods for causing people to refrain from getting the injections. But even as Mr. Biden has urged social media companies to ‘do something about the misinformation,’ Dr. Mercola shows the difficulty of that task …

And rather than directly stating online that vaccines don’t work, Dr. Mercola’s posts often ask pointed questions about their safety and discuss studies that other doctors have refuted. Facebook and Twitter have allowed some of his posts to remain up with caution labels, and the companies have struggled to create rules to pull down posts that have nuance …

Dr. Mercola has appeared more approachable because he takes less radical positions than his peers, Ms. Koltai said. ‘He takes away from the idea that an anti-vaccination activist is a fringe person,’ she said.”

To Whom Are Pointed Questions Dangerous?

Perhaps the most telling part of this slanderous piece is that next-to-last paragraph: “[R]ather than directly stating online that vaccines don’t work, Dr. Mercola’s posts often ask pointed questions about their safety and discuss studies …” What a sad commentary of the progressive censorship that simply forbids anything that contradicts the CDC and WHO.

In response to the accusation that I’m the No. 1 spreader of vaccine misinformation, I told the author, Sheera Frenkel, that I have a hard time understanding how I could possibly undermine Biden’s multibillion-dollar vaccination campaign when many of my Facebook posts only receive a few hundred likes or shares. And even though we have 1.7 million followers, FB has throttled our reach to less than 1% of them, and 99% never see them.

Any reporter can easily check my social media accounts and see the modest interactions, as well as the accuracy of all posts that somehow categorize me as a “superspreader of misinformation.”

I also told her that as the lead author of a peer reviewed publication on vitamin D and the risk of COVID-19, I have every right to inform the public of my medical research. As a licensed medical professional, I also have the right to bring attention to other studies that mainstream media ignores, misrepresents or censors completely.

Frenkel went on to claim she was “unable to verify” that I had indeed published said paper, despite the fact that I supplied her the direct link to the paper. Verifying my claim can also be done in seconds simply by going to PubMed.gov and typing in “Mercola.” My peer reviewed study3 pops right up as the first result available. It’s published in the journal Nutrients, but you don’t need to know that in order to find it.

The NYT deploys the strategy of publishing discrediting narratives based on bold lies first, only to later issue corrections that are buried and virtually no one ever sees. Case in point: They recently corrected an article by Jeremy W. Peters in which he defamed and made false statements about investigative journalist Sharyl Attkisson,4 but the correction came only after she hired a law firm to pursue legal redress.5

“Frenkel claimed the Food and Drug Administration has levied multi-million dollar fines against me. This is a complete fabrication, as the FDA has never fined me a dime. Frenkel also implied that I misrepresent myself as a published author of a paper on vitamin D for COVID-19 by stating she was ‘unable to verify’ my claim, despite being given a direct link to the paper.“

According to Attkisson, Peters “deceptively altered a quote and included fabricated and false information and implications. He also violated New York Times policy by failing to contact me for comment prior to publication.”

July 26, 2021, I sent Frenkel at the NYT a legal notice demanding a retraction of her article due to the falsehoods in it.6 For example, Frenkel claimed the Food and Drug Administration has levied multimillion-dollar fines against me. This is a complete fabrication, as the FDA has never fined me a dime.

As just discussed, Frenkel also implied that I misrepresent myself as a published author of a paper on vitamin D for COVID-19 by stating she was “unable to verify” my claim, despite being given a direct link to the paper.

Where’s the Proof That I Am the ‘No. 1’ Misinformant?

Frenkel boldly claims that I am the No.1 spreader of misinformation online, but she doesn’t qualify what “misinformation” actually is. Without qualifying what it is you’re looking for, how can you quantify it?

She also provides no proof that I in fact have the greatest reach of all personalities reporting on COVID injections. Below is a Crowdtangle search for Facebook posts in the U.S. mentioning “vaccine,” “vaccines” or “vaccinated” from mid-June to mid-July 2021, by the FWIW newsletter.7

I didn’t even make this list, so how is it that I’m dubbed the “No. 1” spreader of vaccine misinformation online? Second on the list is the mainstream news outlet ABC World News Tonight. Fox News anchor Tucker Carlson — whose online audience is far larger than mine — is also on the list at No. 13.

Most of the other people named by our sitting president have little to no reach — I would venture to say a far majority of people have never heard of them. Yet, just 12 people spread two-thirds of all “vaccine misinformation” without penalty from the highly sensitive media controllers at Twitter and Facebook?

The Center for Countering Digital Hate (CCDH) — a “foreign dark money group,” to quote Missouri Sen. Josh Hawley,8 sprang out of nowhere to create lists of people to be deplatformed and censored into oblivion. But why is no reporter asking about the center’s funding, of the citing partner in this group that I’ll go into more depth on later in this article — AntiVaxWatch.org? 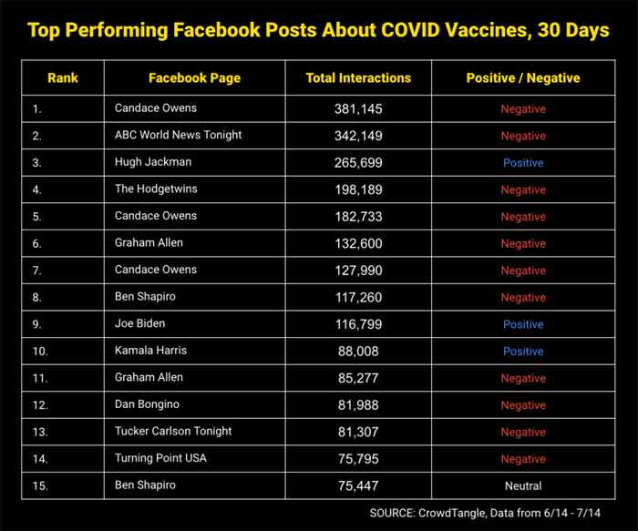 The report itself says the list of individuals was predetermined. From the outset, the dozen individuals were selected (page 6). 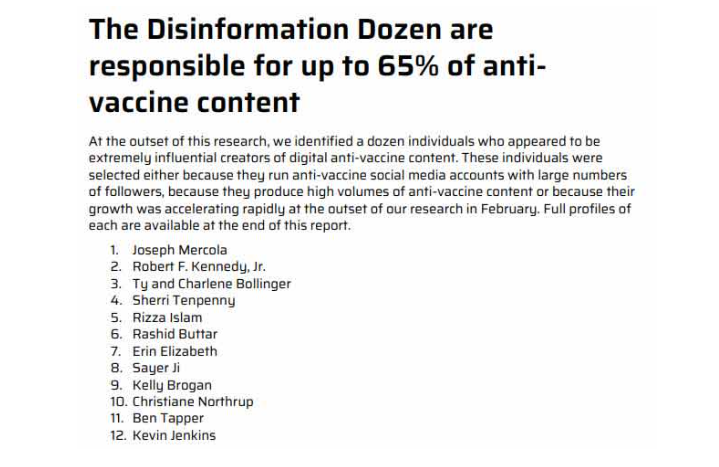 According to Hawley, before the CCDH started attacking individuals for speaking out about COVID jab dangers, this one-man outfit tried to get a number of conservative websites and news organizations banned and deplatformed.

“Who is funding this overseas dark money group — Big Tech? Billionaire activists? Foreign governments? We have no idea,” Hawley said in a July 20, 2021, tweet,9 adding “Americans deserve to know what foreign interests are attempting to influence American democracy.”

If you ask me, the “misinformation dozen” is only the beginning. It’s much easier to target and take down individuals with relatively little power than entire news networks. But eventually, you can be assured that Fox and any other CDC and vaccine dissenters will come into their crosshairs. At that point, we’ll find out just how far the Biden administration is willing to go with this totalitarian crackdown on information. 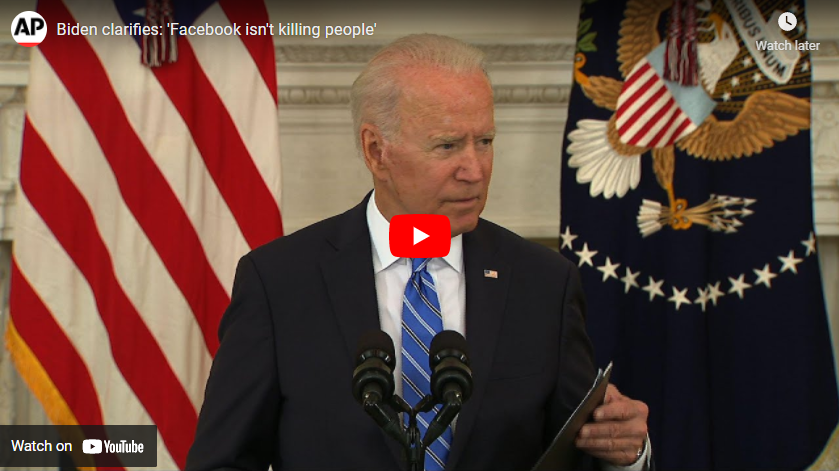 “[Wyss has] declined to tell even the New York Times whether he holds U.S. citizenship and as recently as 2014 stated that he does not hold a green card granting permanent residency.

In 2016 he got into trouble when it was revealed that Wyss had contributed $41,000 to Democratic political action committees (PACs) in violation of the federal government’s strict ban on foreign nationals giving to U.S. political campaigns.

This foreign national has also donated at least $1 million through his foundation to States Newsroom since 2018, a bundle of partisan attack sites posing as impartial news outlets spawned by Washington, D.C., consultants Arabella Advisors.”

According to Capital Research, through his funding of Arabella, Wyss has helped Democrats “win elections and enact policy.”14 InfluenceWatch describes the links between Wyss and Arabella as follows:15

“Arabella and its nonprofit network have been criticized as ‘dark money’ funders both for channeling hundreds of millions of dollars to left-wing organizations and for hosting hundreds of ‘pop-up groups’ — websites designed to look like standalone nonprofits that are really projects of an Arabella-run nonprofit.

In April 2021, the New York Times criticized Arabella’s ‘system of political financing, which often obscures the identities of donors,’ as ‘dark money,’ calling the network ‘a leading vehicle for it on the Left.’

In May 2021, the New York Times criticized Arabella’s New Venture Fund and its 501(c)(4) ‘sister’ nonprofit, the Sixteen Thirty Fund, for their close ties to and funding from the foreign-funded Wyss Foundation, calling Sixteen Thirty Fund one of the ‘leading dark money spenders on the Left’ responsible for distributing more than $63 million in super PAC donations that hurt Republicans and aided Democrats in the 2020 election …”

Arabella is founded by Eric Kessler, who during the Clinton administration worked for the secretary of the interior, Bruce Babbit. During that time, Molly McUsic, current president of the Wyss Foundation, also worked for Babbit.16 At least one former Wyss Foundation staffer now also works for Arabella.

Reporter Hayden Lidwig has also described the inner workings of Arabella Advisors and the influence of the “dark money” flowing through it:17

“My colleagues and I at the Capital Research Center have studied the Arabella network for over two years. Here’s how it works.

Arabella’s nonprofits act as the left’s premier pass-through funders for professional activists. Big foundations—including the Gates, Buffett, and Ford Foundations—have laundered billions of dollars through this network, washing their identities from the dollars that go to push radical policies on America.

But the real juice from these nonprofits comes from the vast array of ‘pop-up groups’ they run—called so because they consist almost solely of slick websites that may pop into existence one day and pop out the next, usually once the campaign is through. We’ve counted over 350 such front groups pushing everything from federal funding of abortion to overhauling Obamacare to packing the Supreme Court.

Arabella is as dark as ‘dark money’ gets. It’s also the prime example of liberal hypocrisy over anonymous political spending, operating in nearly total obscurity from the mainstream media, liberal dark money hawks like Sen. Sheldon Whitehouse (D-RI), or even the conservative movement, from 2005 until 2019, when the Capital Research Center yanked it into the spotlight.

As more of this massive web of groups—responsible for churning out nearly $2.5 billion since its creation—has come into focus, one thing’s become clear: When a special interest donor goes to Arabella, they’re expecting a political payoff.”

The talk of pop-up groups makes me think of the group I mentioned earlier, AntivaxWatch.org,18 which has no public face and no founding or funding information of any kind. It’s just an anonymously created organization that claims to be “an alliance of concerned individuals who are seeking to educate the American public about the dangers of the anti-vax industry” that links to articles and reports by the likes of the CCDH and other extremist vaccine pushers.

Is AntivaxWatch an Arabella creation? Might the CCDH be funded by Arabella too? I don’t know, but both fit the pattern of the kind of outfits Arabella’s “dark money” creates and supports. Hopefully, in time we’ll be able to determine what the truth of the matter is.