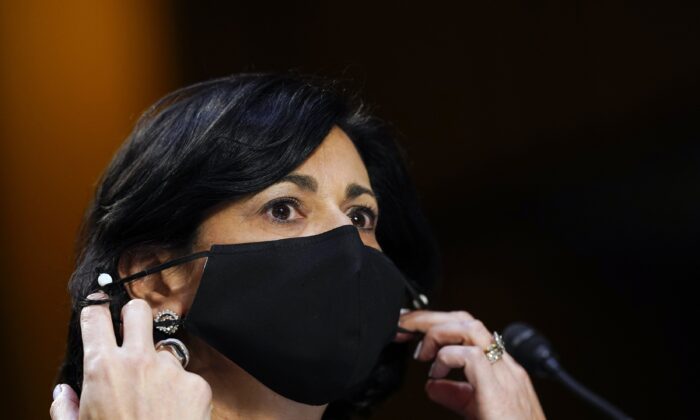 Dr. Rochelle Walensky, director of the Centers for Disease Control and Prevention, adjusts her face mask during a Senate hearing in Washington on March 18, 2021. (Susan Walsh/AP Photo)

A COVID-19 outbreak in a Massachusetts county in July primarily occurred among vaccinated people, sparking fears that a variant of the CCP virus can impact that population more than other strains.

Of the 469 cases detected in Barnstable County, 74 percent occurred among the fully vaccinated, according to a new study published on Friday.

Genomic sequencing of 133 patients showed most of them were infected with the Delta variant of the CCP (Chinese Communist Party) virus.

The bulk of the infected people did not require hospital care, but among the five that did, four were fully vaccinated.

The study, published by the Centers for Disease Control and Prevention (CDC), helped drive agency officials to change masking guidance.

CDC officials announced Tuesday that even vaccinated persons should wear masks indoors, an abrupt shift from under three months ago.

The agency recommended that both the vaccinated and unvaccinated should don face coverings indoors in areas with high or substantial transmission of the CCP virus. More than half the counties in America meet one of those designations.

Researchers, though, said their investigation suggests people in any area should wear masks inside.

“Findings from this investigation suggest that even jurisdictions without substantial or high COVID-19 transmission might consider expanding prevention strategies, including masking in indoor public settings regardless of vaccination status, given the potential risk of infection during attendance at large public gatherings that include travelers from many areas with differing levels of transmission,” they wrote.

Some of the researchers are CDC officials. Others are with the Massachusetts Department of Public Health, which declined to facilitate an interview on the findings. 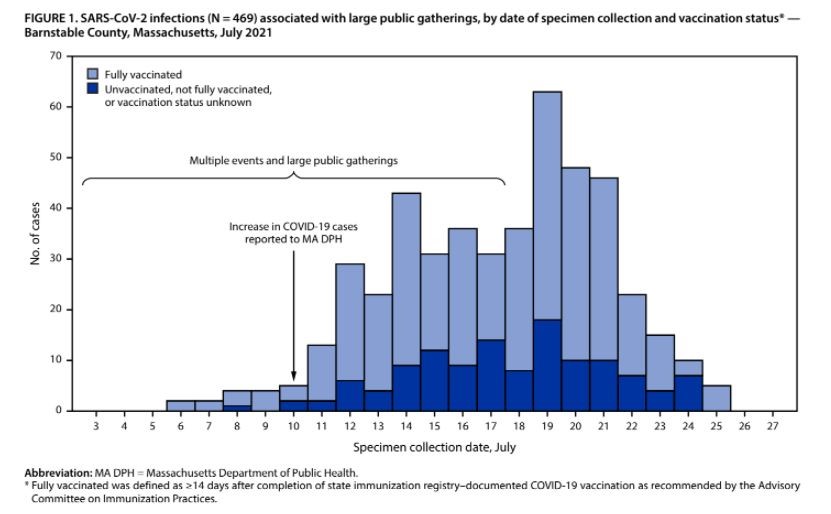 The cases in Barnstable County stemmed from summer events and large public gatherings held between July 3 and July 17, the researchers said in the study.

A graph from a new study published by the CDC shows that many of the COVID-19 cases linked to an outbreak in Barnstable County, Massachusetts, this month were among vaccinated people. (CDC)

The events attracted thousands of tourists to the area.

The average of COVID-19 cases in the county rose sharply from July 3 to July 17.

The cluster cases were defined by a positive COVID-19 test within 14 days of travel or residence in Barnstable County since July 3.

By July 26, 469 COVID-19 cases were identified among state residents, with dates of positive specimens ranging from July 6 to July 25.

Researchers found that the bulk were fully vaccinated, a term that refers to people who have gotten two Moderna or Pfizer COVID-19 vaccines, or the single-shot Johnson & Johnson jab.

Initial data—chain reaction cycle threshold values from some of the specimens—indicate that the viral load of the vaccinated and unvaccinated cases are similar, researchers said. However, they said microbiological studies are required to confirm those findings.

Further, the Infectious Disease Society of America and the Association for Molecular Pathology earlier this year said that such values “should not be considered quantitative measures of viral load.”

Still, the findings were among those used by the CDC to justify the sudden shift this week. Where before vaccinated people were told they did not need to wear a mask anywhere, they are now being told to don a face covering inside.

The data demonstrate “that Delta infection resulted in similarly high SARS-CoV-2 viral loads in vaccinated and unvaccinated people,” Dr. Rochelle Walensky, the CDC’s director, said in a statement on Friday.

“High viral loads suggest an increased risk of transmission and raised concern that, unlike with other variants, vaccinated people infected with Delta can transmit the virus. This finding is concerning and was a pivotal discovery leading to CDC’s updated mask recommendation.”

The recommendation is not binding but the CDC’s advice is widely adopted by counties, states, and businesses.

The rise in cases in Provincetown, part of Barnstable County, prompted town officials earlier this week to adopt an indoor mask mandate.

The mandate will shift to an advisory when the daily positive testing rate stays below 3 percent for at least five days, according to Town Manager Alex Morse.

As of July 29, 882 cases were linked to the Barnstable County cluster, 531 of whom are state residents. The percentage of breakthrough cases remained at 74 percent.