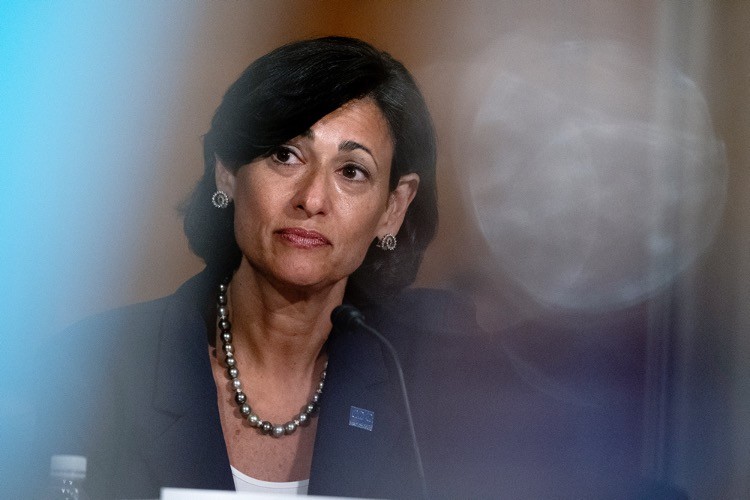 Rochelle Walensky lied about how kids died — and more children will suffer as a result.

Walensky, director of the Centers for Disease Control (CDC), perhaps trying to justify the administration position that children will probably have to wear masks at school in the fall, recently stated that COVID-19 is notably deadlier to kids than is the flu. The problem is that the CDC bigwig’s claim was contradicted by an interesting source: the CDC.

Walensky is an actual doctor.… She went to Harvard. She’s never been elected to anything, but in a pandemic like this, her word is law. It’s more powerful than anything Congress produces. She’s her own federal agency. In fact, on a continuum, she sits somewhere between king and God. So read carefully as Rochelle Walensky tells you that COVID is killing twice as many children as influenza.

“I think it’s really important for people to understand that this is not a benign disease compared to other diseases our kids see,” Walensky could be heard stating in a clip Carlson played (video below; relevant portion begins at 10:05). “If you look at the mortality rate of COVID, just this past year for children, it’s more than twice the mortality rate that we see in influenza in a given year.” 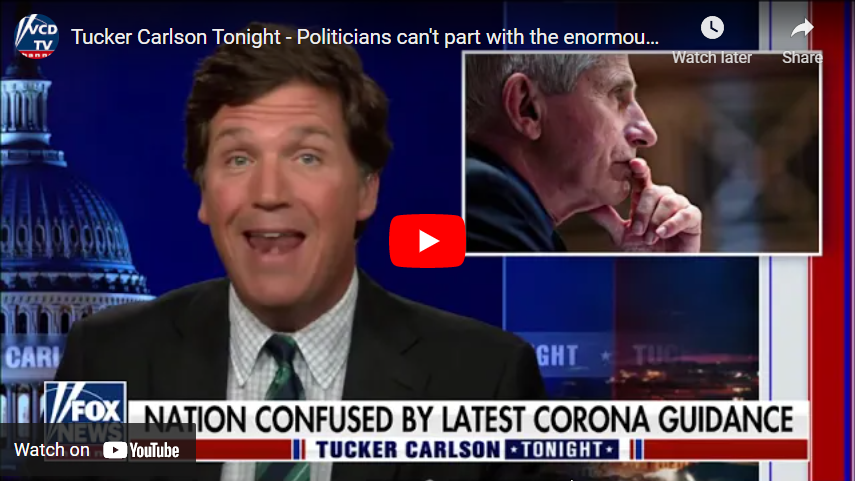 The problem is that unless Walensky is profoundly ignorant of her own CDC’s data and what attentive laymen have known for more than a year, her claim is a lie.

The Truth: “From 2019 to 2020, according to the CDC, a total of 124 children died of COVID. From 2020 to 2021, 213 children died of COVID. By comparison, influenza killed more than 400 children just last year,” Carlson related. “In fact, that was not an aberration. Influenza has killed far more children than COVID has in each of the past five years. It’s not even close.”

This isn’t some esoteric fact. I’ve long cited a study out of Newcastle University in London showing what data the world over reflect: that the flu is at least twice as dangerous to children under 10 as is the China virus. A good example is the Spanish Influenza epidemic of 1918-19, which claimed 675,000 American lives — many of them young. This is more than two million when adjusted for today’s population.

In fact, insofar as diseases go and according to BusinessTech, influenza is history’s fifth-greatest killer (50 million deaths), behind malaria, tuberculosis, smallpox, and plague.

On July 12, New York’s Intelligencer further illustrated the irrationality of fearing the threat SARS-CoV-2 poses to children. “Over the course of the pandemic, 49,000 Americans under the age of 18 have died of all causes, according to the CDC,” the site wrote. “Only 331 of those deaths have been from COVID — less than half as many as have died of pneumonia. In 2019, more than 2,000 American kids and teenagers died in car crashes; each year, according to some estimates, about a thousand die from drowning.”

So if you’re going to mask and/or vaccinate kids for fear of The Virus™, then you’d surely better keep them far away from water and autos.

What’s more, “In a recent report, the CDC itself acknowledges it could be vastly over-reporting the number of children who are dying from COVID,” Carlson also related last evening. “The CDC report states that, when considering everyone who died of COVID, roughly 2.5% of those who died had a co-existing medical condition unrelated to their deaths. But for children under the age of 18, that number is dramatic — over 35% of children who died from COVID had what the CDC calls an ‘unrelated medical condition.’”

“In other words, more than a third of children … listed on the official records as dying from COVID had comorbidity that the CDC assures us cannot possibly be connected to COVID,” Carlson continued. “But it appears, upon closer examination, the comorbidities might in fact be related to the deaths of those children.”

It may be obvious why Walensky and others tell this bold China virus/influenza lie and why Big Media aid and abet them: You can’t justify masking and vaccinating children if people know that COVID is considerably less dangerous to them than a disease most of us sneeze at.

And some cities have actually reinstituted school mask mandates; the Biden administration, as mentioned earlier, has recommended such; and authorities have even pushed to get youths vaccinated. Below is a video of Walensky doing so just last month. 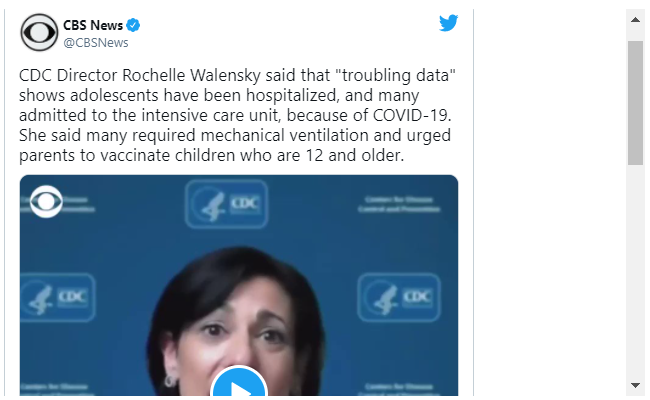 (Moreover, it was just announced that vaccines will be “available” for children under 12 late this year.)

This is child abuse. Studies have shown that masks offer little to no benefit when prescribed for the general population. Yet the costs appear great, with strong indications that masks can become as pathogen-laden Petri dishes on people’s faces and that wearers may be inhaling unhealthful plastic microparticles from them; furthermore, a study found that after just three minutes wearing-time, children were inhaling carbon dioxide at up to six times the acceptable adult level.

As for vaccines, youths have suffered medical complications and even death after taking them; for example, 13-year-old Jacob Clynick passed away just three days after receiving his second China virus injection. Does taking such risk over a disease that imperils kids less than does the flu make any sense?

No, and this explains all the lies. But what should be the consequence for a person who thus deceives? We can already say that the health authorities lied and children died. They, not the January 6 defendants, should be brought up on serious charges.

Published with Permission of thenewamerivan.com