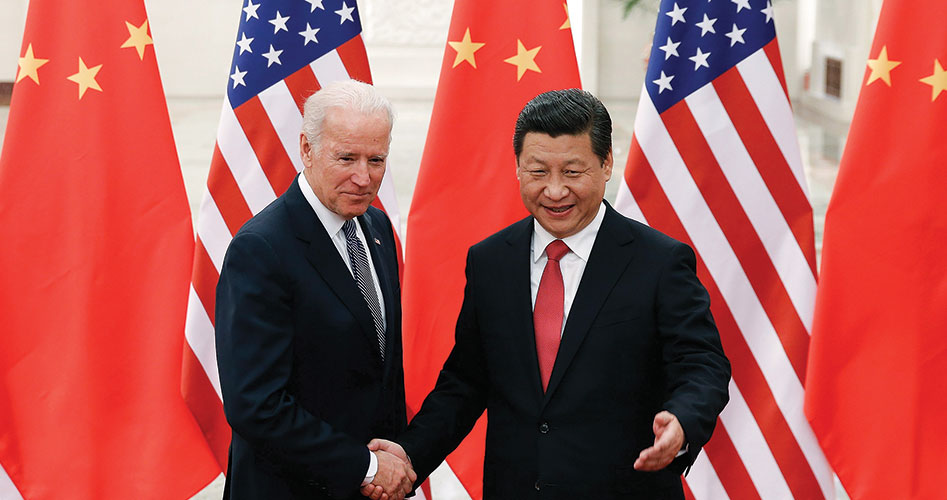 “Biden talks tough on China in first speech to Congress.” That was a Reuters headline on April 28, 2021.

“China and other countries are closing in fast,” Biden warned. “We have to develop and dominate the products and technologies of the future.” And, he pledged, under a Biden administration, “America will stand up to unfair trade practices that undercut American workers and American industries, like subsidies to state-owned enterprises and the theft of American technology and intellectual property.” This followed the much-ballyhooed “tough talk” by Biden’s Secretary of State Antony Blinken and National Security Advisor Jake Sullivan in a March 19 meeting with Chinese counterparts in Anchorage, Alaska.

By the time of his televised address to Congress in April, Biden’s handlers had been coaching him on China tough talk for more than a year. They recognized that President Trump’s rhetoric and actions concerning China had struck a responsive chord with the American public. During the Democratic primaries, a Trump-awakened Biden referred to Chinese dictator Xi Jinping as a “thug.” That was a far cry from his many earlier references to Xi as an old friend. Biden and Xi met a number of times — in China and the United States — while both were vice presidents. Biden boasted many times about their close relationship and claimed he had spent more time with Xi than had any other world leader. In 2013, the Chinese Communist Party (CCP) elevated Xi to president of the People’s Republic of China. Then-Vice President Biden journeyed to Beijing in December of 2013 for another meetup with the new Paramount Leader. Xi welcomed Biden as “my old friend,” and Biden reciprocated, warmly noting their “friendship.” When President/Thug/Friend Xi visited the Obama White House in 2015, he said it was “such a delight” to see Joe Biden, whom he called “an old friend.” At the same White House event, Biden recounted that following his many meetings with Xi, he had told President Obama “that I came away impressed with [Xi’s] candor, determination, and his capacity.”

The Biden-Xi friendship is the culmination of Biden’s nearly half century of “public service” boosting Communist China, first as a senator — during much of that time as chairman or ranking member of the Senate Foreign Relations Committee — then as vice president. Now he’s trying to hide that record with “tough” rhetoric, even as his administration pushes forward with dangerous policies that are clearly aiding China’s drive toward global military and economic dominance, while simultaneously shackling the United States with spending, taxes, regulations, and restrictions that are destroying our economic viability.

Among his first moves as president, Biden issued an executive order reversing Trump’s decision for the United States to leave (and stop financing) the World Health Organization (WHO), which notoriously is in Beijing’s pocket. Even the pro-Beijing New York Times and much of the rest of the Fake News media have reported that WHO officials have helped China cover up its criminal trial in the release of the SARS-CoV-2 virus that has devastated the planet.

In addition, Team Biden has opened the floodgates for China’s state-controlled corporations to invest in the United States and for Wall Street globalists to invest in China. The U.S.-China Economic and Security Review Commission reported in May that 248 of Beijing’s corporate champions, with a total market capitalization of $2.1 trillion, are now listed on U.S. stock exchanges. At the same time, Wall Street is rushing to further entwine America’s economy with Communist China’s, and to increase our dependence on China for everything from toothbrushes, PPE, and medicines to microchips, appliances, and strategic parts for our jet fighters and missiles. BlackRock, Blackstone, Goldman Sachs, Carlyle Group, KKR, JPMorgan Chase, Citi Group, and other investment behemoths that have been pushing U.S.-China convergence for years are upping their ante with billions of more dollars headed to China.

BlackRock, the world’s largest money-management firm, with nearly $8.7 trillion in total assets, has placed three of its execs in top posts with Team Biden: Adewale “Wally” Adeyemo as deputy secretary of the treasury; Brian Deese as head of the White House National Economic Council; and Mike Pyle as chief economic advisor to Vice President Kamala Harris. BlackRock CEO Larry Fink is not only investing billions in China’s coal industry (while pushing “green” propaganda that demonizes U.S. coal), but is also invested in Chinese companies Hikvision and iFlytek, which are primary providers of the surveillance technology the CCP uses to run its police state.

These corporations and their billionaire execs are “global citizens.” They are individual and corporate members of the World Economic Forum and the Council on Foreign Relations. They funded Joe Biden and view his “old friend” Xi Jinping as an ally in their “Great Reset” effort to establish a New World Order.