Has Ashli Babbitt’s Murderer Been Outed? 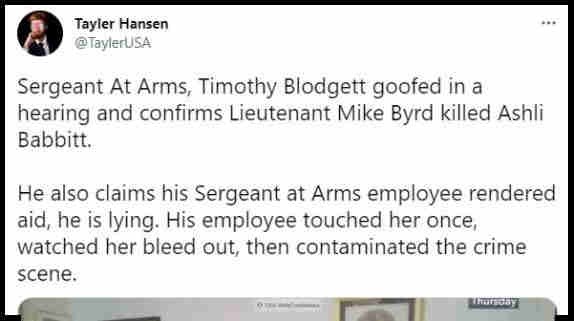 Has Ashli Babbitt’s Murderer Been Outed?

The presumed identity of the Capitol Police officer who killed Air Force veteran and Trump supporter Ashli Babbitt in cold blood on January 6 has been circulating among DC insiders since the fateful day Ms. Babbitt was gunned down just outside the House Chambers.

Although the establishment media has always been quick to pursue and publish names in other officer-involved shootings, alleged discretion about publishing something this grave without the absolute certainty of an official statement as to the killer’s identity has kept the officer’s name out of the establishment media.

However, an obvious attempt at disinformation coupled with a recent statement by Timothy Blodgett, the Acting House Sergeant at Arms, has given a number of independent journalists and websites the courage to put a name out there.

Sources close to and within the intelligence community tell Cockburn that Babbitt was actually shot by a member of then-vice president Mike Pence’s protective detail. The VP’s detail, of course, is provided by US Secret Service, not the Capitol Police. One person asserted to Cockburn over drinks in DC that this is ‘basically an open secret’ in the intelligence community.

Law enforcement sources suggested to Cockburn that the Capitol Police Department and Department of Justice have publicly identified the shooter as a Capitol Police officer in order to protect the reputation of the Secret Service. Cockburn also wonders if this isn’t an attempt to protect Pence from further anger or threats from Capitol rioters who wanted him to refuse to certify the results of the election on January 6.

Obviously, we don’t know Cockburn’s intelligence community sources, but we have a lot of our own, and none of them have heard of that theory or believe that’s how Ms. Babbitt’s murder went down.

Remember, the Vice President was on the Senate side having been rushed to a secure location at the time Ms. Babbitt was killed – that’s at the complete opposite end of the Capitol and his detail would be closed-up tight around him, not over in the House Chambers at the other end of the building.

Secondly, the Department of Justice statement announcing no charges for the excessive force used against Ms. Babbitt specifically stated the Capitol Police officer involved would not be prosecuted. Recent history tells us the Deep State operators in the Department of Justice will readily lie about anything, but this fact is so easily verifiable it seems doubtful they would do so – there were just too many witnesses.

Finally, there is the recent statement of Acting House Sergeant at Arms Timothy Blodgett who seemed to inadvertently identify Capitol Police Lieutenant Mike Byrd as the officer who killed Ashli Babbitt.

Lt. Byrd was well-known on Capitol Hill as one of the several Capitol Police officers who left their service arms in the public toilets of the Capitol complex. Also worth noting, Byrd is the commander of the House Chambers section of the Capitol Police, he would most certainly have been there in plain clothes on January 6, 2021.

Finally, Mr. Hansen reports Lt. Mike Byrd is not working currently, and is not staying at his residence either. And so far, the Capitol Police have neither confirmed nor denied Lt. Byrd’s involvement or non-involvement in Ashli Babbitt’s killing.

Absent a public confirmation by the authorities, or a public disclosure in the upcoming wrongful death suit filed by Ms. Babbitt’s family against the Capitol Police, there is still no official confirmation of the identity of Ms. Babbitt’s killer. Thus, it is left to courageous independent journalists like Tayler Hansen to try to assemble the evidence and present it so the public can weigh it and each of us can make up our own minds.