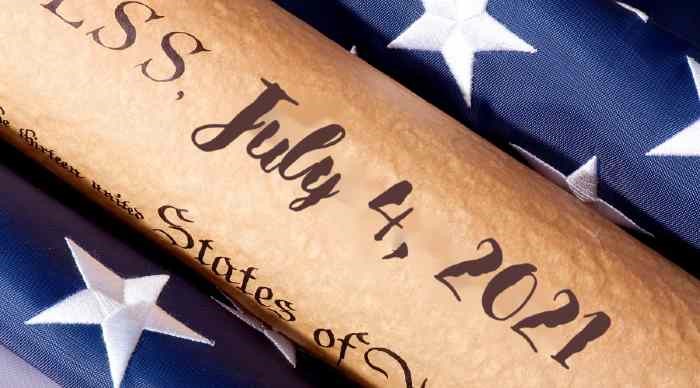 On June 7 of 1776, the Continental Congress met in Philadelphia to consider the independence of the American colonies from Great Britain. It took weeks of debate, but on July 4, 1776, the Declaration of Independence was formally adopted. On this birthday of the United States of America 245 years ago, our Founding Fathers declared their independence from a tyrannical King and created a new country, unique in world history.

This cabal enforces destructive policies that are destroying our country. These policies include the expansion of the federal government, open borders, defunding the police, and creating chaos in our local communities. It also includes a multi-faceted attack on our constitutional rights and the patriots who support these precious freedoms. Often labels such as racist and extremist are used to demonize those who advocate for these rights, such as the First and Second Amendments.

The person who has been vilified the most by these corrupt forces is former President Donald Trump. Starting on the day he entered the race for President in 2015, Donald Trump has been the target of a never-ending stream of vicious political attacks. No other political leader has ever withstood such a wide-ranging assault.

It started with unrelenting criticism of his agenda and efforts to force him to exit the presidential race. Thereafter, he was the victim of a bogus “dossier” that included outright falsehoods. Despite its fabrications, it resulted in a spying operation directed at this campaign and later his presidency.

The assaults never stopped after his presidential victory and a special counsel was appointed to investigate the Russian collusion hoax. After two years and $40 million wasted on a witch hunt, President Trump was exonerated; however, his enemies persevered.

The Ukrainian hoax led to the first impeachment and a bogus claim that he incited violence on January 6, 2021, led to a second impeachment. Although he was acquitted both times, no other U.S. President has had to endure such abuse.

A pandemic launched in communist China destroyed the Trump economy and gave Democrats the perfect excuse to engineer election shenanigans that resulted in millions of mail-in ballots being counted. It also gave shady politicians overseeing elections in swing states the ability to employ questionable tactics, such as denying Republican poll watchers an opportunity to view ballot counting.

The result is that a basement-bound 50-year politician with questionable mental abilities, who generated sparse crowds and little enthusiasm, supposedly garnered a record-setting total of 81 million votes, thereby winning the presidency.

Polls show that millions of Americans still doubt the presidential election results and are furious that the new administration is pursuing an agenda that is 180 degrees different from the successful one engineered by President Trump.

What should Americans who are angry and concerned about the direction of our country do on this Independence Day? We should become inspired by our Founders and declare our independence from a Deep State that hates our history, our values, and our symbols.

This entrenched system includes the mainstream media that is constantly demonizing conservatives, calling concerns about the 2020 election “a big lie” and refusing to hold the new President to the same scrutiny as President Donald Trump.

These corrupt media executives promote the purging of conservatives from the military and the arrest of participants of the U.S. Capitol protest while declining to criticize Antifa or those who rioted throughout the country last summer.

Americans should become independent from the titans of big tech and their social media sites. These insidious enemies of free speech have joined forces to censor and de-platform conservatives such as former President Trump.

We must also declare our independence from corporate America

We must also declare our independence from corporate America which embraced critical race theory and woke attacks on white Americans. These businesses want open borders for cheap labor and horrible trade deals that benefit communist China. These corporations do not care whether their goods are manufactured by slave labor in China. Their only concern is that their products are made for the cheapest cost, delivering the most profit.

It is time to become independent from a medical establishment that is constantly pushing COVID-19 hysteria and questionable measures such as wearing masks. These same forces supported economic lockdowns and downplayed the effectiveness of therapeutic treatments such as Ivermectin and hydroxychloroquine.

Dr. Anthony Fauci, the Director of the National Institute of Allergy, and Infectious Diseases, has become the spokesperson of this group. It was Dr. Fauci who peddled the theory that the virus started in a wet market in Wuhan. New evidence suggests this claim was a blatant lie and the virus emanated from a bio-weapons laboratory in Wuhan.

Americans should also end our dependence on the pharmaceutical giants who manufacture their drugs in communist China. These companies are manufacturing the vaccines and paying for non-stop advertising touting the benefits of a shot which has not received formal approval from the Food and Drug Administration. In addition, this vaccine is being promoted despite mountains of evidence regarding adverse side effects.

We should declare our freedom from a dysfunctional and corrupt educational system, which tries to brainwash students at all levels, starting in grammar school and extending to highly progressive colleges and universities. In these institutions, teachers promote critical race theory and train students to despise our country, including our history, our traditions, our American flag, and our National Anthem.

Finally, we should declare our independence from actors, entertainers and athletes who loathe America. Let us not support them with our hard-earned dollars.

A boycott of Hollywood, mainstream media, big tech, woke corporations, a Dr. Fauci loving medical establishment, the pharmaceutical industry and the failed educational system would save the American people time, money, and aggravation. It might also save our country.

For more information or to order his new book, America’s Last Chance, visit his website JeffCrouere.com  For questions or to schedule Jeff for media appearances, email him at jeff@jeffcrouere.com