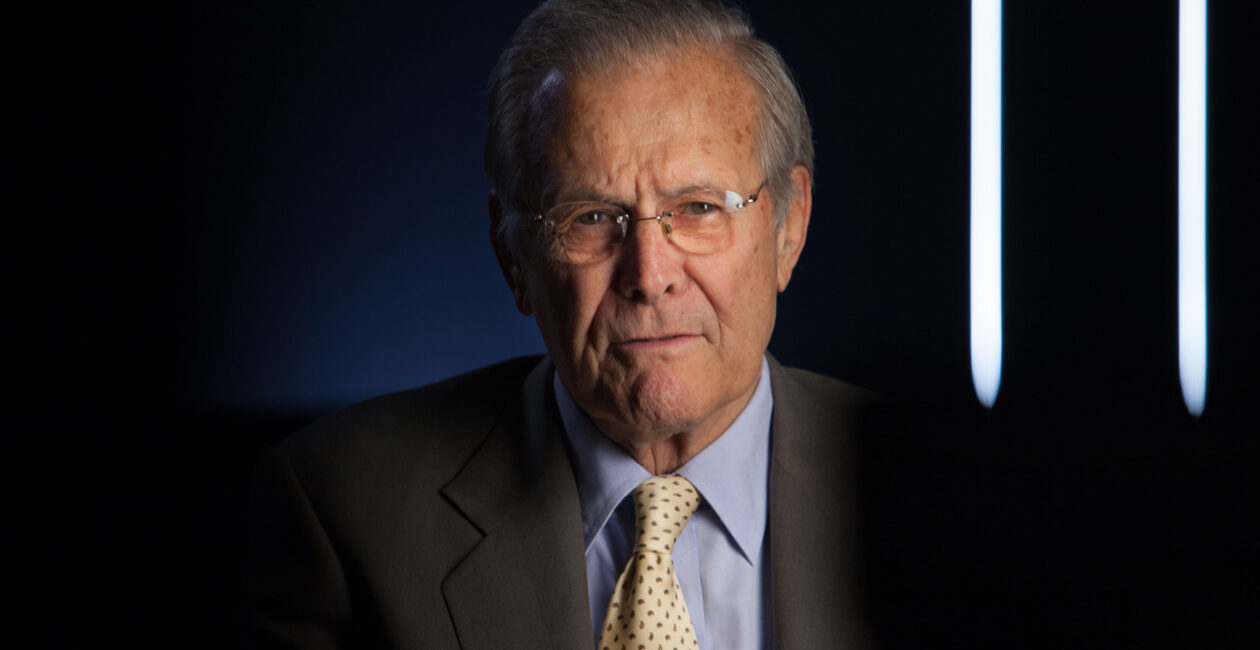 Donald Rumsfeld, forever known to me as simply The Boss, was a man of integrity, character, leadership, and real grit. Pictured: Rumsfeld being interviewed for a documentary, “The Presidents’ Gatekeepers,” on May 17, 2012, in Washington, D.C. (Photo: David Hume Kennerly/Getty Images)

The nation lost a true giant on Wednesday, June 30. Two-time Secretary of Defense Donald H. Rumsfeld, who served Presidents Gerald Ford and George W. Bush, died in his beloved home in Taos, New Mexico. He will always be remembered by those of us who worked with him simply as The Boss.

Rumsfeld was a controversial figure, mostly because throughout his long and storied career he never suffered fools well, always spoke his mind, and cared far more about serving the nation well than what people thought about him. In Washington, D.C., that makes you loyal friends and not a few enemies.

Over the next few days, we will hear lots of talking heads opine about him. Most never really knew him, so the reader is cautioned to take the “popular line” with more than a little salt.

I had the privilege to serve as Rumsfeld’s military assistant for four years and another 18 months as his staff director. I had a nearly seven-days-a-week contact with him during that entire period. Based on that experience, I would like to debunk a few fallacies that will likely come up in the aftermath of his death.

First, in those nearly six years, I never heard The Boss knowingly say anything untrue. On two occasions, he misspoke about subjects that were, frankly, of little consequence. He said something like, “It was 12,” when it was really 14.  Honestly, both incidents were of that pedestrian nature.

After both his unwitting public errors, we informed him about the mistake. He immediately directed me to find and make the correction with every person who heard the misstatement. In both cases, I reported back to him that the task had been completed, and rather than simply acknowledging the report, he proceeded to quiz me as who specifically I had informed, by name (he knew every one of them). I had to look him in the eye and assure him that, yes, every single person got the correct information.

You might say he was a bit obsessed with integrity. To a military officer like myself, it is pretty easy to be loyal to a boss who cares that much about the credibility of his word.

Next, I cannot tell you how often I read in he media that Rumsfeld was “harsh,” “rude,” and even “abusive.” That is all a complete load of nonsense. Was he tough? Yes. Was he demanding? Certainly. Did he expect a high standard of both effort and achievement from his subordinates? Absolutely.

Never in all my time with the secretary did I ever witness him being in any way abusive or rude. If you failed at a task he had given you, or delivered a substandard performance, you knew it. He would give you explicit feedback as to what was deficient.

He never did this to belittle or demean; he did it because he expected you to go back out and do it correctly, not to sit in a corner and suck your thumb. Is that an unrealistic expectation from the people working around the man bearing the burden of managing two simultaneous wars? I do not think so.

He would point out that the reason we had to do things “right” was because there were young men and women out on the end of a long string doing dangerous and difficult things, and who were depending on us to get it right.

Rumsfeld also hated wasting money. I saw many high-ranking appointees who arrived in his office expecting a pat on the back for some extravagant project, only to depart chastened, and their ears burning. They had been told that every dollar the Defense Department spent came from the taxes of working people across America (he liked to refer to a pipe fitter in Pittsburgh to exemplify working Americans).

This was not showmanship. He never talked about it publicly, but the Pentagon learned: shiny, showy, and stupid was no longer going to cut it. He utilized furniture already found in the Pentagon for his office, and reused manila folders (“Write on them with pencil!”). He was a frugal man and expected all of us to never waste anything the taxpayers provided.

A side of Rumsfeld seldom acknowledged was his love of our troops. When speaking to them, he blossomed. He would take all the official briefings, then push through his prepared remarks at a visit to an installation so he could get to the part when he could directly interact with the troops. He would come alive with energy and quite literal joy in answering their always thoughtful questions.

He also would visit the wounded at local D.C. medical centers on Sundays. He never took the press. We would go, sometimes just the two of us, sometimes together with our wives. There was never a time schedule for those visits, he would spend as much time as the troops needed to ask anything they wanted. I always came away with a list of tasks to run down to support their needs.

Once, at the big field hospital in Baghdad during a visit to the war zone, we had finished all the scheduled activities (visiting both the wounded and the incredibly hardworking medical staff) and the head doctor asked me if The Boss could make one more stop, as a additional soldier had just come out of surgery. I knew I did not need to ask permission, knowing The Boss’ intent.

I led Rumsfeld back to the post-op room. The soldier had received eye surgery, and so he was fully awake. He had a bandage around his head and over his eye, a small trickle of blood was running down his cheek like a tear.

During their exchange, the young man took the time to energetically tell the secretary that he was doing the right thing, and that the troops understood their mission, and he should keep fighting for the freedom of the Iraqi people and the protection of American interests.

In the car as we left, Rumsfeld looked at me and said, “I came here to encourage them, and he spent the entire time exhorting me. Where do we find young people like this?”

An often forgotten fact is that Time magazine approached Rumsfeld, intent on naming him its “Man of the Year” in 2003. It was smart to ask first. The Boss said “no,” and pushed it to name not one person, but “The American Soldier” instead. The cover remains an iconic image that honored the rank and file, not the high and mighty.

The bottom line is this: Reasonable people can disagree about the policy choices made by the George W. Bush administration in general, and by Rumsfeld in particular, but this man, forever known to me as simply The Boss, was a man of integrity, character, leadership, and real grit.

Time does not allow for a full obit here; I will leave that to others. The man I knew, the man who shepherded the American military through the 9/11 attacks, the man dubbed “The American Secretary of War” for his strength and service to our nation, will never be forgotten.

He was the embodiment of the “Man in the Arena” to whom President Teddy Roosevelt referred in his famous remarks at the Sorbonne in 1910. He lived, fought, and passed with a quiet power that his critics cannot match.

Rest in peace, Boss. It was an honor to serve beside you.

Steven P. Bucci, who served America for three decades as an Army Special Forces officer and top Pentagon official, is a visiting research fellow at The Heritage Foundation. Read his research.