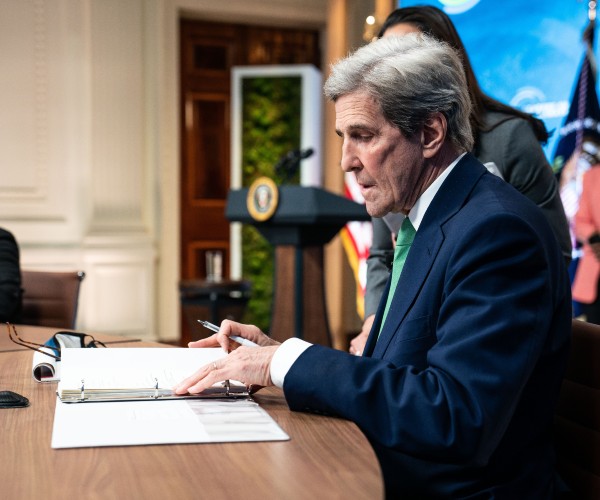 U.S. Special Presidential Envoy for Climate and former U.S. Secretary of State John Kerry waits for the beginning of day two of the virtual Leaders Summit on Climate at the East Room of the White House  – April 23, 2021, in Washington, D.C. (Anna Moneymaker-Pool/Getty Images)

There’s little wonder why Reps. Jordan and Comer are deeply concerned about Kerry’s Biden administration appointment role. The former Massachusetts Democratic senator, presidential candidate, and secretary of state has a habit of being in the center of many of the worst policies that pose major security risks for America.

The agreement with Iran which involved China, France, Germany, Russia, the U.K., and the U.S., was fiercely opposed by Israel.

Throughout the course of JCPOA, Iran continued to enrich uranium up to a near nuclear weapons level of 60% purity, along with unrestricted progress in developing intercontinental delivery missiles.

President Donald Trump wisely withdrew the U.S. from JCPOA in 2018, infuriating Kerry and other Obama officials.

Trump also moved the U.S. Embassy to Jerusalem as he promised to do as president-elect, an action that Kerry incorrectly predicted at the time would cause “an explosion, an absolute explosion in the region, not just in the West Bank, and perhaps even in Israel itself, but throughout the region.”

Trump administration leadership was additionally instrumental in achieving historic peace and cooperation agreements between Israel and Arabian signatories Sudan, Morocco, Serbia, and the Muslim nation of Kosovo under a set of understandings known as the “Abraham Accords.”

Not one of those countries has withdrawn from those agreements since Israeli bombers retaliated with force to massive barrages of terrorist Iran-backed Palestinian Hamas rockets launched from Gaza against dense population centers in Tel Aviv.

The Biden-Harris administration appears eager to return to the negotiating table with a yet-to-be-determined offer to lift punitively punishing Iran sanctions in exchange for another meaningless round of toothless promises that Tehran mullahs will abandon their nuclear weaponry ambitions.

As noted in a recent open letter signed by 124 retired U.S. generals and admirals, “Re-engaging in the flawed Iran Nuclear Deal would result in Iran acquiring nuclear weapons along with the means to deliver them, thereby upsetting Mideast peace initiatives and aiding a terrorist nation whose slogans and goals include ‘death to America’ and death to Israel.’”

The Biden-Harris administration’s Climate Envoy Kerry will now have a central lead role in returning the U.S. as a former Obama-Biden administration party to the Paris Climate Accord, a non-congressionally ratified relationship that Trump had also terminated.

The administration’s current plan is to build political momentum ahead of a November U.N. climate conference to be held in Glasgow, Scotland, where negotiators will aim to cap average global annual temperature rises to 1.5 degrees Celsius preindustrial levels.

Meanwhile, as America commits to slash greenhouse gas emissions by 50% or more by 2030 over a baseline 2005 level, about doubling a 26% to 28% cut by 2025 proposed by the Obama-Biden administration, China, which along with India leads globally in these emissions and is dramatically ramping up coal development gets a free pass.

Under Paris, Beijing isn’t required to even begin cutting back its CO2 emission levels until 2030.

Unlike America, Chinese leaders care little about Paris because they know it binds them to nothing, while Western nations will harm their economies with new regulations and misallocated “green” resources.

Beijing has previously made it clear that it has little interest in following suit with any serious emissions commitments that might impinge on China’s economic growth. In May, Deputy Foreign Minister Le Yucheng said that “Some countries are asking China to do more on climate change. I am afraid that this is not very realistic.”

Nevertheless, President Biden has wasted no time working to end the fracking revolution and eliminate Trump-era accomplishments in finally making America independent of foreign oil for the first time in many decades.

During his very first day in the Oval Office, Joe issued executive orders to cap the Keystone XL pipeline and place a moratorium on oil and gas drilling on federal land and waters.

A ruling this month by Louisiana U.S. District Judge Terry Doughty in response to suits filed by 13 states has blocked the latter drilling prohibition order.

Meanwhile, Biden has inexplicably removed Trump sanctions on Russia’s completion of the Nord Stream 2 pipeline under the Baltic which will deliver Siberian natural gas to Germany with no Kerry climate criticism whatsoever.

In addition to the previous $1.9 trillion COVID-19 relief package, less than 10% of this proposed $2.3 trillion everything-including-kitchen-sink proposal is earmarked for the sorts of road, bridge and airport projects most people generally think of as infrastructure.

Much of that money is proposed for transitioning from abundant, reliable hydrocarbon energy needed to power our industry, air condition our homes and fuel our transportation in exchange for literally charging forward with a transition to intermittent and unreliable wind and solar energy.

At least $500 million of that infrastructure package would be used to install a half-million electric vehicle charging stations across the country which will greatly increase power grid demands.

All of this will result in trading U.S. energy independence for technologies that depend upon rare earth materials from China which controls 80% of the world supply.

If correct, that puts chief negotiator, Climate Envoy Kerry, right up there among the most consequential internal security threats our nation has ever known.