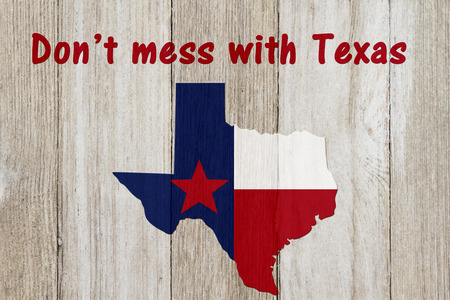 It’s interesting isn’t it? Texas is the Left’s most sought after prize as far as turning the last major electoral state blue. And so for a second time this year with the weather, one of the legs of their agenda driven phony climate war is exposed, and we find them blaming the fossil fuel ( in this case NG) for a Texas power disaster.

Here is what people who do not actually look at the weather, but use it for nefarious purposes do not want you to understand. That the weather swings back and forth! It is always going to test limits and guess what, if you can observe it better, you will see it hit limits. What the left does understand and our side can not seem to get the urgency of, is this, THEY KNOW HOW TO USE IT TO DRIVE HOME THEIR AGENDA. We have sat here and just let them steamroll the nation, and they know darn well how to point the finger and blame the other side for something they actually are at the cause of. 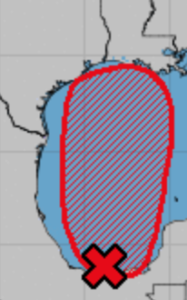 On May 26 we outlined the pattern (and I have tweeted on it many times) of why we should be aware of a real tropical cyclone (not some feature that develops out of the tropics and takes off into the middle of nowhere. Ana and Bill may never have been named 30 years ago) forming in the gulf in mid-June. Well its mid-June and this is from NHC on June 16th.

It’s pattern evolution, the seeds are planted well in advance. Many times when there is development in the gulf its nice and cool in the Northeast due to a big buckling of the jet stream. This CUTS the pressure gradient in Texas so there is a lack of wind

The map below is from June 14. Notice the lack of isobars (that is not where a meteorologist goes to get a cold drink.. ha ha weather humor to prove what a geek I am). 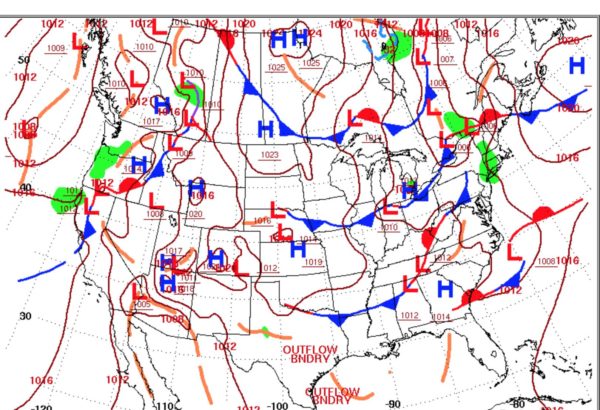 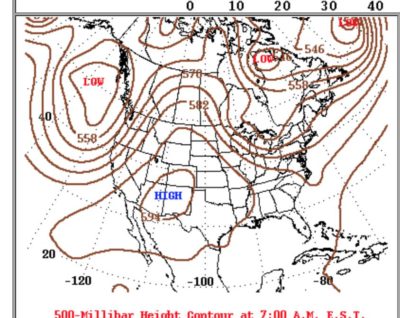 Now because the easterlies are starting to blow in the tropics if there is no way for them to get to Texas, air begins to pile up southeast of Texas. When that happens, tropical cyclones try to develop, and that further interrupts the normal southeast flow. So here we are mid-June and the pattern recognition technique from late May that said we had to be concerned about this, is trying to come to fruition.

June tropical cyclones coming out of the gulf are a normal occurrence. By that I mean its always the place to watch, along with the western Caribbean. 3 of the most infamous tropical cyclones in June, Audrey 1957, Alma 1966 and Agnes 1972 all journeyed thru the gulf. So this is not that unusual. So it’s not a climate change thing. But one of the huge differences in Texas since those non co2 concern years is population. There are 2.5 times the amount of people there now, (no wonder the left wants to turn it blue) and there is much more infrastructure. So what do you think happens to demand?

So the wind dies. It means its hotter in the big cities of Texas since there is no normal SE flow. It also means there is no wind in the west Texas wind fields. So how can fossil fuels be blamed when NG outdid its performance and Wind was only 17%. See chart below for June 14 at noon 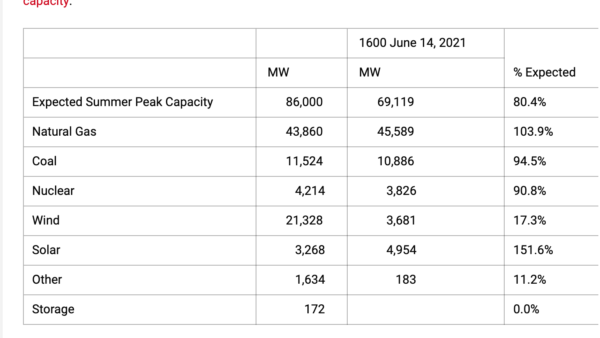 Once again though it was the weather. Now notice solar being way up.( it is sunny when its hot) So is the solution to pave west Texas with Solar panels? That’s a real environmental friendly solution ( sarc). What happens when its cloudy there and sunny and hot with no wind in the big cities?

My point is that renewables are NOT THE MAIN DIET. They are supplements and are worthy supplements. But what the left is doing is trying to force everyone to accept their diet and in doing so, claims that the supplement can replace what works.

Look what happened to Spain and Germany when they tried their green revolution, (again I am involved in a plan that is an actual Green new deal that stops co2 at the point of generation and stresses agriculture, not paving over fields with solar panels which is about as anti environment as you can get) they almost went bankrupt. A great example of a fossil fuel rich country not making use of fossil fuels is Venezuela. What is going on in this country now is a lot like Venezuela when their downward spiral began. The Green new deal is an essential leg of completing the fundamental transformation of our way of life.

Once again understanding the pattern beforehand could have had Texas ready to mitigate this. This one was more subtle, not an in your face from a week away that was missed by many in the freeze. But it’s a classic example of the propaganda that is used when the blame game is started. NG was over performing. There was little wind in west Texas so wind power was under performing. But you hear its NG fault the grid almost went under. The lack of the sweeping gulf breeze means Houston hits 100 with no wind as opposed to 95 with wind, same for the other big cities. THERE ARE MANY MORE PEOPLE IN TEXAS so demand is much greater. If you want to trust that to the whims of the weather with what the weather is capable of doing, you are at its mercy. For planners its all hands on deck including perhaps old geezer forecasters that can pick out weather events from years ago cause he is geek and can help “officials” in doing this. I thought I proved my chance to help in the freeze, but never got called to testify on the crucial aspect of public-private partnerships in preparation.

But in the end guess what. It was not the fossil fuel industry that failed here. Just like the freeze, imagine if the Texas grid was all renewable reliant rather than 25%. You can come to your own conclusion.

To sum up I am not anti wind or solar. I am for understanding proper roles of renewables that have to be used instantly and can not be stored. And I am not for saying they are “green” technology when fields that could have had co2 using greenery are paved over with solar panels, as I am seeing around here in central Pa. They can help reduce demand on fossil fuels but in the end it’s like a team that thinks they can win with a few trick plays. They can help you win, but you need the reliable basics. And that now we have the way to quell the fear of co2 (whether you fear it or not) that does not involve the calculated move of turning future generations into indentured servants that have to pay back a debt and are controlled by the limits imposed on them by the lefts phony climate war, there is a way out.

But no one is listening about the weather, or the way out of the lefts propaganda machine that has taken control. So in the end, there is a failure of people who should be treating this much more urgently. While I used to think it was “just another issue” it is far more than that. It is one of their keystones and they are using deception like this recent issue in Texas and getting away with it.

Buckle up. They will have western heat much of the summer ignoring the plentiful rains in our growing areas and then they will have the hurricanes (no matter how strong or how many, every one is a chance). That is a forecast that is sure to verify.