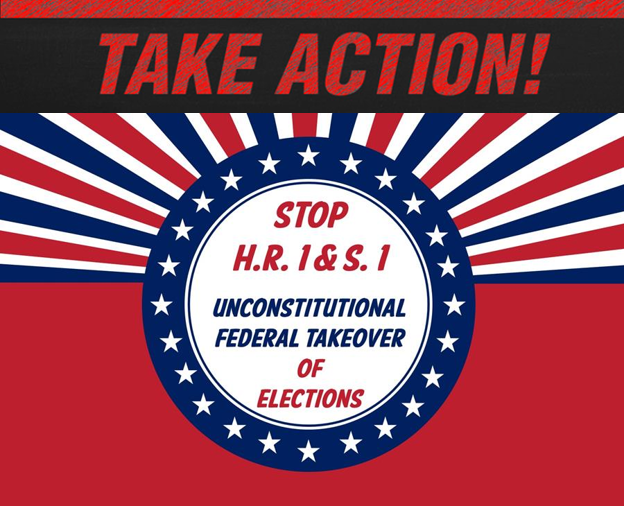 URGENT: Next Week (June 14-18) the U.S. Senate will vote on S.1, the so-called “For The People Act,” which if enacted would result in an unconstitutional federal takeover of elections. Meanwhile, Senator Joe Manchin (D-W.Va.) announced he is open to an amended version of the bill, while other Democrats are seeking to amend the bill to gain Manchin’s support. The Senate is the primary obstacle to enacting S. 1/ H.R. 1; tell your senators to oppose any version of this bill!

As the bill number suggests, the bill is a top priority for Congressional Democrats. Additionally, now that Democrats control the House, Senate, and White House, a possibility exists that this bill could pass and be enacted.

Are S. 1 and H.R. 1 Constitutional? The obvious answer for anyone familiar with the U.S. Constitution and the Federalist Papers is a resounding “No,” because there is no grant of power given to the federal government to simply take over elections.

The power to takeover and regulate elections nationwide is not among the 18 specifically enumerated powers listed in Article I, Section 8 where one can find grants of power for routine ongoing operations of the federal government, such as coining money, establishing post offices, etc.

Section 1001 of S. 1/ H.R. 1 would implement Internet voter registration. American elections have already suffered severe degradation in the area of voter registration lists caused by the National Voter Registration Act of 1993, aka the Motor Voter Act — lists that were intended to be used to prevent fraudulent voting. Allowing Internet voter registration would take a bad situation and make it worse, basically providing an open door for fraudulent voting. Congress should not only defeat S. 1/ H.R. 1, but also repeal Motor Voter, something Republicans promised when they ran for Congress in 1994, but set aside once they were elected.

If you think Motor Voter has caused problems, just consider the dangers of automatic voter registration, especially with S. 1/ H.R. 1’s buried requirement that it be done via electronic transfer of data. How fast can one computer send bogus data to another computer? All that and no paper trail of the voter registration as they are processed? Section 1012 is seriously bad for honest elections. Furthermore, this provision, among others, would lead to non-citizens being registered to vote.

Section 1031 of S. 1/ H.R. 1 would force the states to implement same-day voter registration. Most states have traditionally implemented a deadline for registering new voters, typically about a month prior to an election, in order to give election officials enough time to properly process the applications and be certain they are genuine. This important election integrity measure would be tossed out the window if S. 1/ H.R. 1 passes.

Section 1201 of S. 1/ H.R. 1 would prohibit voter caging. The term “voter caging” sounds like like a horrible act of torture, but what the bill says is:

(A) a nonforwardable document that is returned to the sender or a third party as undelivered or undeliverable despite an attempt to deliver such document to the address of a registered voter or applicant; or

(B) any document with instructions to an addressee that the document be returned to the sender or a third party but is not so returned, despite an attempt to deliver such document to the address of a registered voter or applicant, unless at least two Federal election cycles have passed since the date of the attempted delivery;

This provision in S. 1/ H.R. 1 would greatly reduce verification of voter registration lists. This is something done with voters every two years in Texas when voter cards, which are good for two years, are sent to the voters and those that are undeliverable are returned to the county elections office. As bad as Section 1201 is, it could be easily amended to make any form of voter registration verification illegal and that would be even worse.

Section 4201 is entitled “The Honest Ads Act.” While few would argue against the concept of honesty in political advertisements, monitoring ads is not allowed as a function of the federal government. This section of the bill is short on details and probably marks just the beginning of what could be greatly expanded into an unconstitutional federal ministry of truth in political advertising that would rival Germany’s Reichsministerium für Volksaufklärung und Propaganda. Speaker Nancy Pelosi has stated that S. 1/ H.R. 1 will make it easier for the Democrat Party to promote its narratives on controversial issues.

Additionally, the bill would make it nearly impossible to challenge the act, requiring all lawsuits to go through Washington, D.C., based courts rather than federal courts based in any of the states.

The Wisdom of Alexander Hamilton

This bill, which would essentially accomplish a federal takeover of elections in this country, is quietly moving forward in Congress and public awareness needs to be raised that such a dangerous bill has already been passed by the House and that it needs to be defeated in the Senate. Alexander Hamilton put it best when he said as previously quoted in this article:

Suppose an article had been introduced into the Congress empowering the United States to regulate the elections for the particular States, would any man have hesitated to condemn it, both as an unwarrantable transposition of power and as a premeditated engine for the destruction of the State governments?

CLICK ON THE RED BUTTON BELOW in order to send a prewritten, editable message to your U.S. senators urging them to vote NAY on S. 1.

We also encourage you to write a letter to the editor to your local newspaper encouraging others in your community to likewise contact their senators to oppose the passage of S. 1, seeing as it would result in a blatantly unconstitutional federal takeover of our elections.

Your Friends in The John Birch Society

Your Coordinator:
Search for them here.