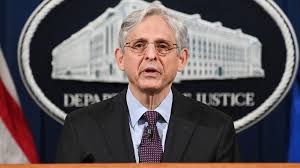 Nine state Republicans traveled to Arizona today to observe the Maricopa audit. They are considering conducting their own audits of the 2020 election.

That seems to have prompted a desperate Attorney General Merrick Garland to threaten anyone who considers it, making note of criminal statutes.

This should serve to spur on states to do audits and tighten their election laws. What are Democrats trying to hide? They are doing everything imaginable to prevent any review of the election.

It’s unfortunate Garland isn’t as concerned about the laws that were changed illegally in Pennsylvania and Georgia, among other abnormalities in the 2020 election.

Mail-in balloting — the way it was done in November — means everyone votes whether they are eligible or not. There is no voter ID when the ballots are cast — largely in drop boxes with no chain of custody.

“We are scrutinizing new laws that seek to curb voter access and where we see violations we will not hesitate to act,” he said. “We are also scrutinizing current laws and practices in order to determine whether they discredit against black voters and other voters of color. Particularly concerning within this regard are several studies showing that in some jurisdictions nonwhite voters must wait in line substantially longer than white voters to cast their ballots.”

“The Department of Justice will apply the same scrutiny to post-election audits, according to Garland, to make sure the election reviews fall in line with federal laws meant to protect records and guard against voter intimidation,” the Epoch Times reported.

“Garland referenced the audit taking place in Maricopa County, Arizona, on the orders of the Republican-controlled Senate in the state, noting that the Department of Justice previously sent a letter to Arizona Senate President Karen Fann expressing concern about the review,” the report continued. “Fann said in a response letter that the audit was secure and that a previous plan to canvass some voters was on hold indefinitely. The attempted intervention lacked constitutional authority, experts told The Epoch Times.”

VOTER ID DOES NOT LIMIT VOTERS

There are absolutely no laws that will “restrict” access for those who can prove they have a right to vote in U.S. elections. A major study conducted by the National Bureau of Economic Research based on ten years of voting data in the United States from 2008-2018 found that voter ID laws “have no negative effect on registration or turnout, overall or for any group defined by race, gender, age, or party affiliation.” The study was conducted by Enrico Cantoni at the University of Bologna and Vincent Pons at Harvard Business School and was published in February 2019.

“These voters were just as likely to vote in states requiring photo identification as in those that don’t.” Even left-leaning Vox News conceded that voter ID laws don’t reduce election turnout.

The Department of Justice is threatening states by lying about voter integrity laws. Something is seriously wrong here. Garland is a liar and he’s abusing his power.