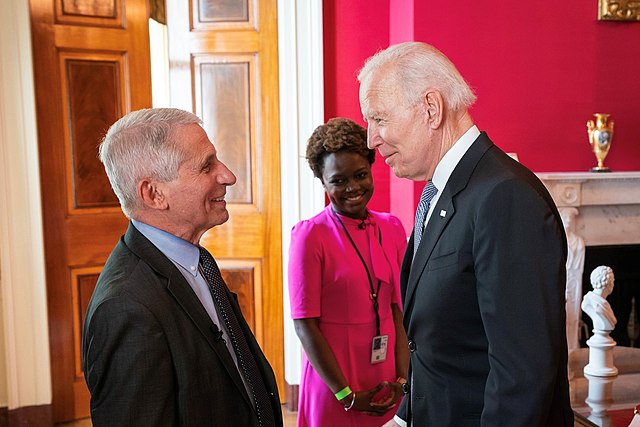 Dr. Anthony Fauci has had a bad month.

Hours past his fifteen minutes of fame, the avuncular Dr. Fauci has shown to be dishonest and self-serving regarding the coronavirus pandemic after 18 months of being the nation’s media darling. His cumulative contradictions and truth-shading, particularly about the cause of the global Covid outbreak, are too obvious and disturbing to ignore.

Dr. Fauci’s craven cover-up of the origins of the Covid-19 pandemic are a continuation of a long tradition of government lying—both by politicians and life-tenured bureaucrats. Furthermore, his prevarication is a microcosm of the ongoing government-sanctioned misinformation and distortion about climate change as a way of justifying and implementing costly, ideological Green New Deal policies detrimental to Americans.

The recent release of Dr. Fauci’s email communication from early in 2020 at the outset of the pandemic revealed that he learned the coronavirus most likely started from the virology lab in Wuhan, China. Yet, he publicly dismissed that possibility and instead pointed to Chinese wet markets and bats while he credulously accepted the Communist Chinese government’s bogus propaganda.

It also was revealed that the federal agency headed by Dr. Fauci, the National Institute of Allergy and Infectious Diseases (NIAID), funded dangerous “gain of function” research on viruses, including at the Wuhan lab. Dr. Fauci has deceitfully downplayed this revelation. NIAID’s role indicates why he shifted focus away from the Wuhan lab and undermined his ultimate boss at the time, the President of the United States, who fingered that lab as culpable for unleashing the coronavirus. Such perfidy by Fauci and his concealing relevant facts about the worst public health crisis of the last 100 years would be a major scandal but for the pliant, sycophantic media personalities still protecting their celebrity.

The point here is not to rehash Dr. Fauci’s mendacity, which is impressively detailed by others. Rather, it is to illustrate that such conduct is nothing new and has been ongoing in other issue areas over which the government directs.

Throughout the 1960s, Americans were told the U.S. was winning the Vietnam War, yet President Lyndon Johnson, Defense Secretary Robert McNamara and many other officials advancing that narrative knew otherwise. The release of the “Pentagon Papers” exposed their lies about the war, even while they drafted and sent tens of thousands of American soldiers to fight and die for a lost cause.

The rampant distortion about Covid by the government-media-tech complex goes back more than a year. The damage, while serious, is temporary. As the virus dissipates, the economic restrictions are falling away and more people are returning to school and work. The same prevaricating on climate issues, namely, global warming, goes back decades and has reached a fever pitch such that the Biden administration is attempting to permanently transform the country using similar Covid-like economic and energy restrictions.

Present-day Covid and climate lies, including about supposed “science and data,” are pervasive because they are empowering; that is, they enable politicians to intervene in the economy, spend trillions of dollars, and order society in ways unprecedented in modern times. Yet, the degree, history and impact of climate change does not warrant President Biden and cohorts destroying the oil and gas industry, spending trillions of dollars in printed money we do not have, and ordering the vast private financial industry to invest in “green projects.”

Politicians and bureaucrats like Dr. Fauci set the false narrative on Covid also to protect their industry and funding. Similarly, climate lies get told to enrich that industry with sustained government and philanthropic support.

Calling climate change an existential planetary threat and attempting to attain zero net emissions without having to prove necessity is about locking in massive government control over individual freedom and the private sector. The resulting policies will affect our means to travel, where we can work, what our children are taught in school, what we can eat, the type of energy we consume and how much, and ultimately whether Americans will be allowed a First Amendment right to question or object to this transformation of the country.

Lest this appears “alarmist” about the climate agenda, a reminder about Covid-19. Anyone who questioned the prevailing bureaucratic and media narrative about the pandemic, including bona fide scientists and physicians, was attacked as a “conspiracy theorist” and worse, and was banned from expressing their research by social media tech giants. Yet the skeptics are being proven correct on the virus origin, treatments, mask-wearing and much else.

Falsehoods about Covid and climate issues get perpetuated because so few in the media scrutinize their claims. More voices are needed to challenge the words and actions of government, its politicians, entrenched bureaucrats and interest group mavens, so many of whom have manipulated data and ignored science to advance their political agenda.

If government officials can lie for years about a war, a pandemic and so much else, they will continue to do likewise on climate in order to “transform” the country’s energy and economic systems for the worse.