German and American Military  Surrender to a Political Ideology

The more urgent need today is for the Pentagon’s senior leadership to remember the evolutionary history of America’s military. For they seem to no longer hear it, as they dance to the political tune of woke.

German and American Military  Surrender to a Political Ideology

This was the oath that Germans once recited when joining the military:

“I swear loyalty to the Constitution and vow that I will protect the German nation and its lawful establishments as a brave soldier at any time and will be obedient to the President and my superiors.”

Hitler’s Jewish Soldiers: The Untold Story of Nazi Racial Laws and Men of Jewish Descent in the German Military

After President Paul von Hindenburg died on 2 August 1934, Adolf Hitler became both Chancellor and President of Germany, and the German oath changed.

“I swear by God this sacred oath, that I will render unconditional obedience to Adolf Hitler, the Führer of the German Reich and people, Supreme Commander of the Armed Forces, and will be ready as a brave soldier to risk my life at any time for this oath.”

Members of the Reichswehr—army and navy—held their right arms in the schwurhand (‘swear-hand’) position with the right hand and the index and middle fingers raised, with the last two fingers curled down toward the palm. The configuration dates back centuries in some European nations, as well as in the Vatican when new recruits into the Swiss Guards pledge their allegiance to the Pope.

It is possible that one or more of the German soldiers swearing their allegiance to the Führer above were Mischlinge (mix-ling)—a term that applied to partial-Aryans as a consequence of the 1935 Nuremberg race laws concerning Jewish ancestry. More than a few Mischlinge served in the German armed forces.

“[A]t least 150,000 Mischlinge could have served in the Wehrmacht…If Hitler had treated the Mischlinge too harshly in the 1930s and early 1940s, he might have lost support from thousands of Aryans in key positions in the economy, armed forces, and government who had Mischling relatives…As the war worsened, Hitler’s persecution not only of the Jews but also of Mischling dramatically escalated.” (Hitler’s Jewish Soldiers: The Untold Story of Nazi Racial Laws and Men of Jewish Descent in the German Military, Bryan Mark Rigg, 2002, pp. 268,272.)

Woke is about a political ideology.

The fake meme behind Department of Defense (DoD) wokeness is that America’s military is full of ‘white supremacists’ and ‘extreme patriots’ who need to be purged from the services to make room for more diversity and inclusivity.

When people of varying gender, sexual preference, ethnicity, skin color, and religious beliefs enlist in the U.S. military, each takes an oath with the same key language pledging to “… support and defend the Constitution of the United States against all enemies, foreign and domestic”.  Additional language includes the pledge to “obey the orders of the President of the United States and the orders of the officers appointed over me, according to regulations and the Uniform Code of Military Justice.”  The UCMJ is the guard rail against illegal orders.

Today, the DoD is adding a new criterion to military service. Military personnel must be ‘woke—slang for being aware of social injustices. Those not deemed woke are the Left’s Mischlinge in the U.S. military. The purge of the un-woke has begun. For example:

“A Space Force commander was reportedly relieved from his post for making comments denouncing Marxist ideology in the military. Lt Col. Matthew Lohmeier, commander of 11th Space Warning Squadron at Buckley Air Force Base Colorado, was relieved from his post Friday by Lt. Gen. Stephen Whiting, the head of Space Operations Command, according to Military.com. Whiting had lost confidence in Lohmeier’s ability to lead. The decision was made based on Lohmeier’s comments on a recent podcast. ‘Lt. Gen. Whiting has initiated a Command Directed Investigation on whether these comments constituted prohibited partisan political activity,’ a Space Force spokesperson said.” (msn.com)

The diversity, inclusion and equity industry and the trainings we are receiving in the military … is rooted in critical race theory, which is rooted in Marxism

Lohmeier’s infraction was denouncing the Critical Race Theory.  “The diversity, inclusion and equity industry and the trainings we are receiving in the military … is rooted in critical race theory, which is rooted in Marxism,” Lohmeier said.

Lohmeier elaborated: “What you see happening in the U.S. military at the moment is that if you’re a conservative, then you’re lumped into a group of people who are labeled extremists, if you’re willing to voice your views. And if you’re aligned with the Left, then it’s OK to be an activist online because no one’s gonna hold you accountable,” as reported in the Washington Examiner.

If you wonder where this woke initiative comes from, look no further than the Biden-Harris Administration and its linkage to the Obama Administration. Here’s a summary of the woke movement from the The Claremont Institute.

“The common refrain from both civilian leaders and active-duty service members alike is that the military ‘should be a reflection of our values as a nation.’ But the military is becoming a reflection of the values of the global economic order, not those of the United States. Over the last 10 years, and with increasing intensity over the last five, corporations and governments in the West have set out to redesign their entire societies along specific goals regarding sex and gender representation for purely socio-political reasons. Gender parity in boardrooms, among senior management, and in executive training, along with other diversity-related mandates, is widely considered—at least among elites—a necessity.”

The irony of the woke mindset, when applied to the U.S. military, is that the early advocates for military racial diversity were not politicians, but active-duty personnel.

On 26 July 1948, President Harry S. Truman signed EXECUTIVE ORDER 9981 ESTABLISHING THE PRESIDENT’S COMMITTEE ON EQUALITY OF TREATMENT AND OPPORTUNITY IN THE ARMED SERVICES.  But the movement leaned toward desegregating the U.S. Armed Forces, as chronicled in the Truman Library, before within the military.

Among the earliest advocates for a diverse U.S. military was Lieutenant General John C. H. Lee.  In a memo dated 26 December 1944, addressed to commanders in the European Theater of Operations, Lee wrote:

“1. The Supreme Commander [i.e., General Eisenhower] desires to destroy the enemy forces and end hostilities in this theater without delay. Every available weapon at our disposal must be brought to bear upon the enemy. To this end the Theater Commander has directed the Communications Zone Commander to make the greatest possible use of limited-service men within service units to survey our entire organization in an effort to produce able bodied men for the front lines. This process of selection has been going on for some time but it is entirely possible that many men themselves, desiring to volunteer for front line service, may be able to point out methods in which they can be replaced in their present jobs. Consequently, Commanders of all grades will receive voluntary applications for transfer to the Infantry and forward them to higher authority with recommendations for appropriate type of replacement.  This opportunity to volunteer will be extended to all soldiers without regard to color or race, but preference will normally be given to individuals who have had some basic training in Infantry. Normally, also, transfers will be limited to the grade of Private and Private First Class unless a noncommissioned officer requests a reduction.

In the event that the number of suitable Negro volunteers exceeds the replacement needs of Negro combat units, these men will be suitable incorporated in other organizations so that their service and their fighting spirit may be efficiently utilized.”

Note the date of Lee’s memo.  On that very day, the American 4th Armored Division brought relief to the 101st Airborne forces at Bastogne during the Battle of the Bulge where 20,876 Allied soldiers were KIA, 42,893 were WIA, and 23,554 were captured/missing.

The Allies needed more frontline soldiers for the big push into German territory.

The American military took steps toward racial integration much earlier than 1944. 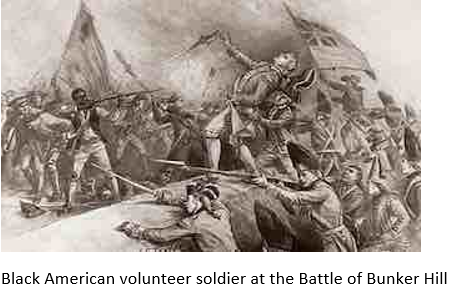 Black American volunteer soldier at the Battle of Bunker Hill

The painting here depicts a Black American volunteer soldier, on the left, shooting a British officer at the Battle of Bunker Hill, 17 June 1775.  Of the 2,500-4,000 American fighters that day, approximately 150 were “Patriots of Color” (i.e., Native and African Americans).

Something is missing that is much more authentic than the Pentagon’s politically-motivated purge of extreme patriots.

Those two words used together defame the honor of all those military personnel, living and dead, who received the Congressional Medal of Honor for their extreme patriotism.

The more urgent need today is for the Pentagon’s senior leadership to remember the evolutionary history of America’s military. For they seem to no longer hear it, as they dance to the political tune of woke.

(The white author served in a remote U.S. Army unit in the Mekong Delta consisting of two white soldiers, two black soldiers and one Inuit Native American. All wore green. )