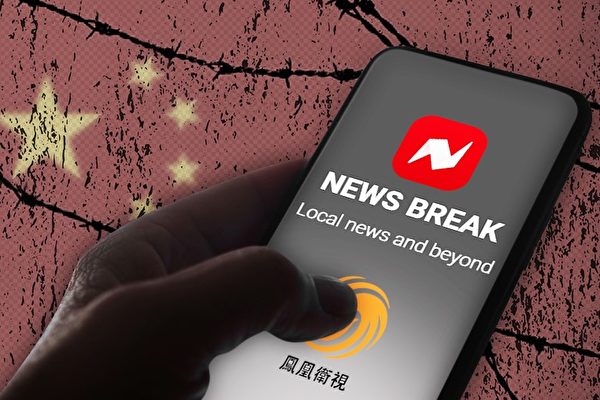 By Jennifer Zeng and Hannah Cai

Connections between China and News Break, a top news aggregation app in the United States, have been exposed.

On May 23, the Boston-based The Wire China website published an in-depth investigation revealing News Break’s deep ties with China.

Before the investigation was published, the Yidian’s website listed the establishment of Particle Media as a milestone in the company’s growth, with the following description:

“In April 2015, Yidian Zixun established Particle Media, an affiliate company in Silicon Valley, to launch its global strategic deployment, and the English version of Yidian Zixun, News Break, was recommended by the U.S. App store twice in a row and has become a popular news aggregation application in the United States.” 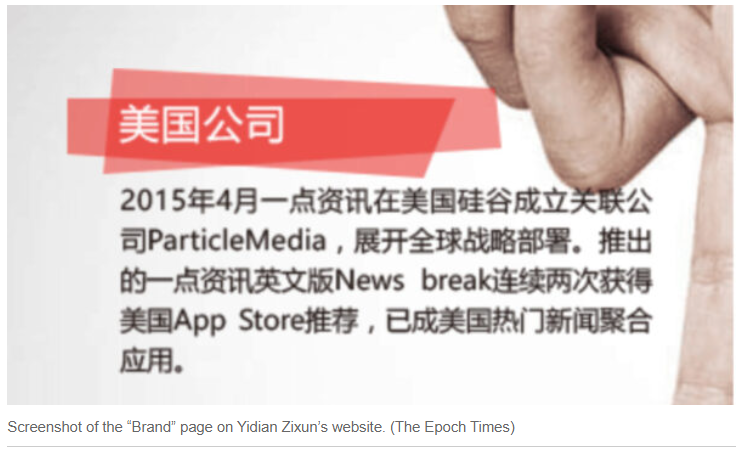 Screenshot of the “Brand” page on Yidian Zixun’s website. (The Epoch Times)

However, the description was removed from Yidian’s website after The Wire China published its investigation.

According to The Wire China, News Break said the statement on Yidian’s website was inaccurate and that its legal department would send a letter asking that it be removed.

A search in Chinese for the description only led to “404” error messages, which means the articles have been removed.

A screenshot of a Chinese article describing the relationship among Yidian Zixun, Particle Media, and News Break. (The Epoch Times)

However, articles on relatively smaller sites can still be found that mention Yidian Zixun establishing Particle Media in Silicon Valley, such as this one and this one published by bloggers on Sohu. The Epoch Times achieved these two articles and made further investigation into News Break’s connection with the Chinese regime.

According to publicly available information, News Break is owned by Particle Media. It was established by Jeff Zheng in April 2015, and is the English version of Yidian Zixun, which was also founded by Jeff Zheng.

According to his LinkedIn page, Jeff Zheng obtained a Ph.D. in computer science at the University at Buffalo after he gained a Masters in Science degree at the Chinese Academy of Sciences. He gained his Bachelor of Science degree from Tsinghua University in China.

In 2013, he founded Yidian Zixun, which can be translated as “one byte of information,” and acted as the CEO.

From October 2014 to December 2016, Phoenix New Media acquired a 44.2 percent stake in Particle Media, a portion with a fair value of $135.3 million, reported one of China’s major web portals sina.com.

It later sold out part of its share, but still held 3.63 percent of Particle Media as of 2019.

There is little information about Particle Media, especially on Chinese websites. However, The Epoch Times was able to locate a pdf file of Phoenix New Media’s update on the sale of its shares in Yidian Zixun.

According to The Wire China, Jeff Zheng founded Particle Media Inc. in Delaware, with its company headquarters in Mountain View.

Zheng is also currently a shareholder of Yidian Zixun in Beijing. 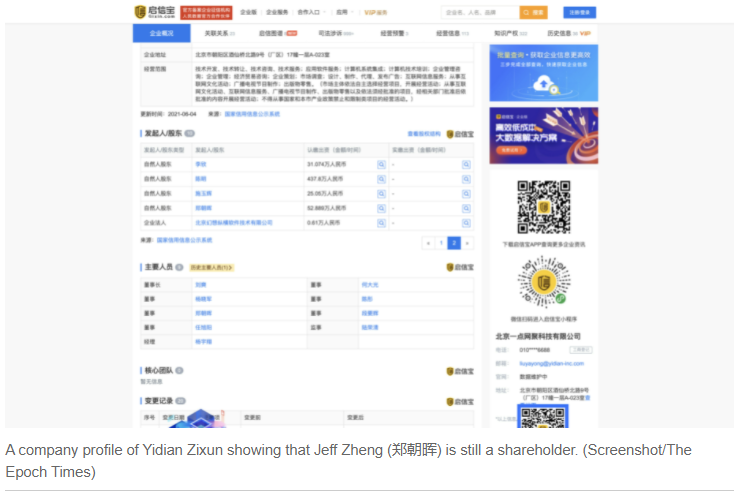 News Break now denies having ties to Phoenix or Yidian Zixun, but acknowledges that its early backers were companies partially owned by the Chinese Communist Party (CCP) from at least 2015 to 2019.

At that time, News Group and Today’s Asia both held 45 percent of Phoenix TV, while China Wise International held 10 percent. Liu Changle was appointed as the Chairman of the Board and Chief Executive Officer.

Phoenix TV was the first overseas TV station to be legally allowed to broadcast in China. It was granted landing rights by the National Radio and Television Administration of China in 2003.

Phoenix TV has long since been known as a mouthpiece of the CCP. Its news reporting has always been consistent with the stance of the CCP.

Liu Changle once said, “CCTV is the big brother, we are the little brother.”

A commentator told the Chinese edition of The Epoch Times in 2005, on condition of anonymity, that when entertaining his guests at a banquet in Shenzhen in 1998, Liu Changle said that the CCP’s Ministry of State Security had given him $2 million for him to set up a television station.

Born in Shanghai on Nov. 5, 1951, Liu Changle moved to Beijing in 1953 with his father Liu Xiangyi, who was a senior CCP official. In 1964, he moved to Lanzhou and worked at the Lanzhou Pharmaceutical Factory after graduating from high school in 1970.

Six months later, he joined the People Liberation Army (PLA) of the CCP, and served as an officer in the political propaganda department of PLA’s 40th Group Army in Liaoning Province.

In 1980, he graduated from Beijing Broadcasting Institute, which later became the Communication University of China.

Liu Changle joined the Central People’s Broadcasting Station (later translated as China National Radio) in 1983 and worked as a reporter, editor, and news commentator before being promoted to the rank of senior management, and was sent overseas by the CCP in 1988.

Known as the “King of China Telecom,” Jiang Mianheng, the eldest son of former CCP leader Jiang Zemin, has been the de facto controller of China Mobile.

In 2009, Hong Kong pro-democracy activist Szeto Wah publicly pointed out that “not only is Phoenix TV a CCP-funded and controlled media, but the main people in charge also have a national security background. Since no one believes what Beijing’s CCTV says, they are using Phoenix to suppress dissidents.”

During his tenure as CEO of Yidian Zixun, Jeff Zheng brought in Phoenix New Media as a shareholder and quickly turned it into an official voice of the CCP.

According to Sina, on Sept. 7, 2016, the CCP’s Internet Information Office, which is in charge of controlling information on China’s internet, brought the internet information offices of 31 provinces, municipalities, and autonomous regions onto Yidian Zixun’s platform.

The article says this would turn Yidain Zixun into “an all-around publishing platform of the Internet Information Office focused on spreading the spirit of Xi Jinping’s speeches and strategic ideas.”

In addition, many government and military departments; the Belt and Road Initiative; and more than 8,000 self-publishing media personnel, industry elites, celebrities, opinion leaders, and entertainment stars all set up accounts on Yidian Zixun’s platform, creating huge attention and rapid growth for Yidian Zixun.

In the following year of 2017, Yidian Zixun became one of the top 3 apps in the personalized news industry classification.

News Break is the English Version of Yidian Zixun

The Phoenix website published an article titled “Yidian Zixun Enters the US, Founder Goes to Supervise the Battle” on April 30, 2015.

The article says, “Recently, Yidian Zixun announced the latest progress of its internationalization strategy: the founder will go to the United States to supervise the English market, and has recruited more than a dozen senior engineers and scientists in Silicon Valley, and will launch the English version [of Yidian Zixun] at the end of the second quarter.

“According to an official statement by Yidian Zixun, the establishment of its U.S. company is a key step in the globalization of Yidian Zixun, which will use the world’s first ‘interest-based engine’ to enter the U.S. market and take advantage of the founding team’s resources and contacts in the United States to replicate Yidian Zixun’s successful model and become a truly innovative Chinese Internet company with global technological influence. ”

At the end of 2015, the CCP proposed to construct a “1+6+N” model of international propaganda work.

On Feb. 17, 2016, Xi Jinping first proposed building a “flagship international communication media with Chinese characteristics.” With the establishment of China Global Television Network (CGTN) in December 2016, it then became clear that the role of “1” should be filled by CGTN, “6” referred to the CCP’s six major mouthpieces of People’s Daily, Xinhua News, CCTV, China Radio International, China Daily, and China News Service, and “N” is for other English-language websites, platforms, and institutions that have the potential to “perform international communication functions” for the CCP, according to an article published in the Global Media Journal of Tsinghua University.

If measured using this model, News Break should fall into the “N” category.

The content is recommended according to the user’s browsing preferences so that everybody gets different content. News Break gathers information from users’ searches, subscriptions, and online interactions to recommend relevant channels and content for users to subscribe to.

Zheng called this an “interest-based engine.”

Optimizing the “long tail” news has also been a strength of Yidian Zixun.

A 2016 report of the CCP’s State Council’s science webpage described how Yidian Zixun used “long tail” personalized technology to help the CCP’s propaganda and information control efforts in Xinjiang by “enabling the localized and accurate delivery of government information and full coverage of information in Xinjiang,” and “telling the Xinjiang story well.”

Jeff Zheng said during the interview, “In the year and a half since its launch, News Break has achieved very high retention rates of 55 percent … making it the number one product of its kind in the U.S. market.”

Five years after its launch, News Break is now “The Nation’s #1 Intelligent Local News App,” getting to the #1 spots on both Google Play and Apple Store, according to its website.

It claims to have 45 million monthly active users and 24 million installs via the App Store and Google Play in 2020.

News Break did not respond to questions from The Epoch Times regarding its relationship with Yidian Zixun and Phoenix TV.