THE REAL THREAT TO IDAHO AND AMERICA: CHUCK WINDER AND HIS SENATE 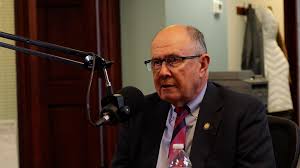 THE REAL THREAT TO IDAHO AND AMERICA: CHUCK WINDER AND HIS SENATE

Senate Pro Tem Chuck Winder insulted conservative Idahoans this week when he told the City Club of Boise that the Idaho Freedom Foundation is the “biggest threat to democracy” the state faces.

First of all, this is not a democracy. It’s a constitutional republic. But that said, in reality it’s Winder and his Senate that is a threat—not just to Idaho, but to the entire country.

Remember that it was Winder and most of his Senate colleagues who voted multiple times to fund programs that teach young people that America is inherently racist and  the way to combat systemic racism is to support socialism and communism. Winder and his Senate colleagues can bitch and moan that it’s not happening, but it is. We’ve provided ample proof, from Boise State University’s own efforts to drive a pro-police coffee shop off campus to the University of Idaho’s blatant support for Black Lives Matters. We’ve also documented how Idaho undergraduate students must navigate a gauntlet of social justice courses and departments in order to earn a degree.

Winder and the state Senate listened to the progressive media, kowtowed to leftist special interest groups, ignored the evidence, and voted to continue social justice indoctrination on our college and university campuses. Thankfully, some outstanding conservative House members, working in tandem with the IFF’s research staff, were able to counter the Senate and offer a better course: a multimillion dollar cut to university social justice programs and a restriction on the publicly-funded indoctrination critical race theory in Idaho.

Remember that Winder also cast the deciding vote to give $6 million to a pre-kindergarten organization that promotes exposing babies and toddlers to social justice and critical race theory. The legislative session ended with the bill on hold in the House, again thanks to conservative state representatives. Had Winder’s Senate gotten its way, plenty of money would have gone toward getting kids out of their homes and away from their parents so that their young minds could be shaped to support the LBGTQ agenda, radical environmentalism, and union organizers.

It is a fact that when you look at Winder’s voting record, the records of Senate Republican committee chairmen, and the record of Senate Democrats, there is very little daylight between them. They are all very much oriented toward socialism. Oh sure, Winder and his colleagues will cast the perfunctory votes needed to seem conservative, occasionally voting pro-life or pro-gun. But on a wide range of other topics, Winder and most other senators have nothing to offer but a bigger, more expensive, and more burdensome cradle to grave government.

Isn’t it interesting that the usual progressive education and business special interests don’t offend Winder? That’s because he and most of his colleagues in the Senate do those interests’ bidding more often than not. They’re comfortably in bed together.

Yet Winder is threatened by the Freedom Foundation? Why? What is so scary about our continued and unflinching support of limited government and conservative values?

Throughout its history, America has served as a beacon of hope and opportunity for the world. But today, many groups are attempting to undermine our constitutional republic. Other states are already deeply drenched in socialism. For them, there may be no going back. Idaho was well on its way to the same fate before the IFF arrived on the scene almost 13 years ago.

Last session, the Idaho Freedom Foundation and Idaho Freedom Action got thousands of Idahoans to call and write their legislators urging them to defend American principles. And that’s what has Winder so upset.

That’s why I say he and the state Senate are the greatest threat to our state and our nation. Not the Idaho Freedom Foundation. Winder is either with us, in the trenches, fighting to save the country, or he’s on the other side.