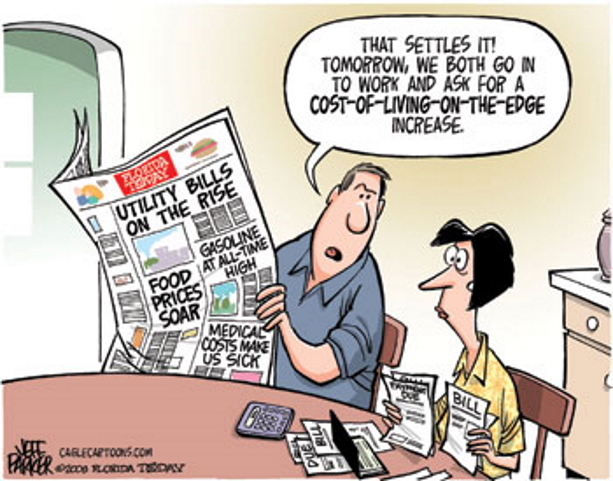 The federal excise tax on gasoline is undoubtedly a tax most consumers do not think about when they put gasoline into their cars. Even more obscure to consumers are the various taxes manufacturers must pay and build into the prices of their products, from widgets to cars.

But even if taxpayers were to receive an annual itemized statement documenting every penny they paid in taxes over the course of the year, it would still fall short of what the federal government is actually costing them. The reason: taxation is only one means by which the federal government collects money from the American people to pay for its programs; the other means is inflation.

Because the federal government does not collect enough tax revenue to pay for its programs, it must borrow money to make up for the shortfall. When the Federal Reserve expands the money supply (inflation) in order to finance this debt with newly created dollars, the result is the devaluation of already existing dollars and higher prices for goods and services.GB

But those higher prices for goods and services are also a tax of sorts — albeit an extremely hidden tax. If, for example, the money supply were inflated 10 percent in order to pay for federal programs that were not funded through direct taxation, then the federal government would have effectively imposed a 10-percent tax on every American consumer. But how many American consumers would connect the resulting higher prices at grocery stores with government and Fed actions?

In fact, the federal government, with its ability to create any amount of money it wants out of thin air through the Fed, could dispense with taxes altogether and pay for the entire cost of the federal government through inflation alone. This very point was made many years ago by Beardsley Ruml, the chairman of the Federal Reserve Bank of New York, in an article entitled “Taxes for Revenue Are Obsolete” in the January 1946 issue of American Affairs. But Ruml, who came up with the withholding-tax scheme, did not say that taxes are obsolete. He wrote that a principal reason for continuing to levy taxes is “to attain more equality of wealth and of income than would result from economic forces alone.”

Of course, inflation also has its advantages from the point of view of big-spending politicians who’d like to make the cost of big government far more obscure than is possible through coercing employers to withhold taxes from workers’ paychecks, or through taxing the providers of goods and services who must then pass those costs along to consumers. And so, as the size and cost of government has grown, so too have the national debt and the creation of money out of thin air to finance that debt.

The Obama administration inherited a deficit of more than $1 trillion, and that deficit will grow significantly larger because of the new federal programs President Obama is championing. A provision in the new $787 billion American Recovery and Reinvestment Act (also known as the “stimulus” bill) makes very transparent the extent to which the federal government is actually planning for this eventuality. That provision increased the national debt ceiling by $789 billion, from $11.315 trillion to $12.104 trillion.

The bottom line is that inflation will almost certainly be a more heavily emphasized tool for financing the federal government than in the past, despite President Obama’s recent claims that he will cut the deficits in half in the future. The way to end deficit spending — and the inflation tax — is to cut government spending. But that’s not what President Obama or most congressmen have in mind.