The Deep State and Our Military 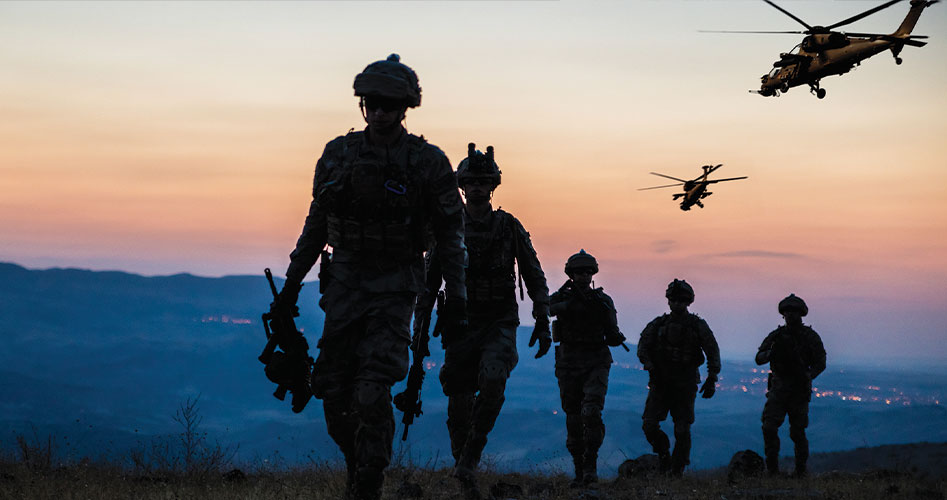 The Deep State and Our Military

The treacherous actions of top U.S. military leaders over the past four years reflect the dangerous influence acquired by the Council on Foreign Relations during a century of subversion.

In 1996, the Council on Foreign Relations (CFR) published Continuing the Inquiry: The Council on Foreign Relations from 1921 to 1996, by Peter Grose. It was reissued a decade later, in 2006, with a new foreword by CFR President Richard N. Haass. Although essentially a hagiography of the organization, this short book provides revealing glimpses into important hidden history, including the CFR’s seduction, corruption, and commandeering of much of the leadership of our country’s military services. The Inquiry, to which the book’s title refers, is the name taken by a secret group, numbering about 150 individuals, composed primarily of Wall Street financiers and their hired lawyers and Ivy League academicians, formed toward the end of the First World War. The moving force behind the Inquiry was “Colonel” Edward Mandell House, President Woodrow Wilson’s mysterious advisor. House had never served in the military; his military title was an honorific bestowed on him by a Texas governor as patronage for House’s aid in his gubernatorial campaign. Colonel House exercised a Rasputin-like control over Wilson, who referred to him as “my second personality,” “my independent self,” and “my alter ego.”

When President Wilson sailed for the Versailles Peace Conference in 1918, a large contingent of Inquiry members sailed with him. House and other Inquiry members had already arrived in Paris ahead of him. Confirmed internationalists, Inquiry members played key roles in drafting the Versailles Treaty and the charter of the proposed League of Nations, their attempt at creating an embryonic world government. “The vision that stirred the Inquiry,” writes Grose in the opening page of his book, “became the work of the Council on Foreign Relations over the better part of a century.” Indeed, it did. When the U.S. Senate rejected the Covenant of the League of Nations because of the obvious threat it posed to our national sovereignty, the globalists of the Inquiry formed a permanent organization to carry out a long-term program to capture institutional levers of power and to transform American attitudes in favor of their New World Order. Bringing the U.S. military to heel would be essential to this scheme. Thus began a parade of military officers to the Harold Pratt House, the CFR’s headquarters in New York City, for indoctrination in Globalism 101.

“In 1962 the Council had initiated a program to bring selected Air Force officers, on their way to flag rank, to the Harold Pratt House for a year of research and reflection with their civilian counterparts,” Grose writes. “This became a pilot project, with no intent at pun, and succeeded to the extent that the Army, Navy, and, eventually, Marine Corps asked for and received similar access.” He notes that a few years later, in 1967, the Rockefeller Brothers Fund invited the Council to devise a similar fellowship program for promising scholars aged 27 to 35 from university faculties and the civil service. “Over the coming decades, with each year’s Military Fellows and civilian International Affairs Fellows, plus visitors from the expanding Committees across the country, the corridors of the Harold Pratt House awoke to curiosity and youth, to stimulate the thought habits of the mature members.”

The CFR’s patient, decades-long march through our military ranks has paid off for the globalists. Take, for example, the appearance of Admiral James Stavridis on MSNBC’s Morning Joe program on December 30, 2020. Tellingly, he appeared in tandem on the program with CFR president Richard N. Haass to charge that the Trump administration’s “obstructing” of Joe Biden’s security team is “dangerous.” Both of the Morning Joe regular hosts — Joe Scarborough and Mika Brzezinski — are CFR members and intense hate-Trump globalists.

Asked if he agreed that the Trump administration’s action could be “dangerous” and “taken advantage of and exploited by our adversaries,” Admiral Stavridis told the MSNBC audience that, yes, it “is dangerous…. There are tactical problems, operational problems and strategic problems.” The retired Navy admiral went further, charging that “there are real-world consequences here. And I absolutely call on the Pentagon officials who are indeed Trump loyalists — who walked in the door less than a month ago at the very senior levels, including the acting secretary of defense — let’s do the right thing here for the nation.”

Selling Out for Globalist Honors, Pelf

Critics have good reason to question whether Admiral Stavridis is truly motivated by doing “the right thing for the nation” or doing what is best for the globalist oligarchs with whom he has thrown in his lot. It was apropos that Admiral Stavridis was coupled on the MSNBC program with CFR honcho Haass, since Stavridis is a longtime member of the CFR, a fact that neither the MSNBC host nor Haass nor Stavridis mentioned. And he is not simply an ordinary member, by the way, but a director of the CFR, as well as a director of the group’s Nominating and Governance Committee, its Studies Committee, and its Election and Appointments Board.

Is this important? Well, let us consider the opinion of another admiral of the U.S. Navy, the late Admiral Chester Ward, former judge advocate general of the Navy and for many years a member of the Council on Foreign Relations before becoming one of its fiercest critics. According to Admiral Ward, the goal of the CFR is the “submergence of U.S. sovereignty and national independence into an all-powerful one-world government.” He noted from experience that “this lust to surrender the sovereignty and independence of the United States is pervasive throughout most of the membership.” He added, “In the entire CFR lexicon, there is no term of revulsion carrying a meaning so deep as ‘America First.’” This should give some idea as to why Donald Trump’s adoption of the “America First” slogan and his “Make America Great Again” agenda of national independence caused such a ferocious reaction from the entrenched globalists, including those senior officers within the military ranks.

Admiral Stavridis personifies the ambitious military man who betrays his oath and sells out his country. For his faithful service to the Deep State, Stavridis has been richly rewarded since his retirement with lucrative and prestigious appointments. Undoubtedly, among the most profitable of those rewards is his appointment as operating executive with the Carlyle Group, one of the world’s largest private-equity funds. One of the three founders and co-executive chairmen of the Carlyle Group is David Rubenstein, who also happens to be chairman of the CFR, as well as chairman of the CFR’s Global Board of Advisors. In addition, Rubenstein is a member of the super-elite Trilateral Commission. Like most of the other big Wall Street firms, the Carlyle Group is heavily invested in China, partners with corporations controlled by the Chinese Communist Party (CCP), and has brought many CCP-approved employees into its Asian investment operations. The admiral is also chair of the Board of Counselors for McLarty Associates, the high-powered consulting and lobbying firm, where Thomas McLarty and John Negroponte are members of both the CFR and Trilateral Commission.

Stavridis’ globalist ties don’t stop there; he’s also a director of the Rockefeller Foundation, which has been at the center of funding for the leftist cultural-political-economic revolution for the past century. In addition, he is a columnist for TIME magazine and a national security commentator for NBC and MSNBC, along with disgraced former CIA chief John Brennan and other hate-Trump members of the Deep State intelligence community. He endorsed Hillary Clinton and Joe Biden. He has received awards from the Atlantic Council and the Stimson Center, both CFR-aligned globalist “think tanks” that wage war on American sovereignty and independence. To top it off, he is a “Davos Man,” joining the World Economic Forum’s annual luxury confab of billionaires, celebrities, and politicians who annually swoop into Switzerland in their Learjets and Gulfstreams to lecture the rest of humanity on the need to reduce consumption. The sanctimonious WEF plutocrats are now pushing their master plan for transforming all life on the planet through their Orwellian “Great Reset.”

During the Trump administration and the 2020 presidential campaign, we witnessed an unprecedented series of public attacks by many of these officers on the president of the United States, claiming he was unfit for command. However, Brigadier General Albert E. Brewster has charged that it is these anti-Trump generals and admirals who have shown they are unfit to command by using “contemptuous words” against their commander in chief, a criminal violation of the Uniform Code of Military Justice. In fact, it is evident that some of these officers went much further, by actually acting together with their Deep State co-conspirators in the State Department, Justice Department, FBI, intelligence agencies, other federal offices, and media in an ongoing treasonous coup effort against President Trump, beginning even before his inauguration.

Moreover, the CFR military members have played an indispensable role assisting their CFR brethren in politics and the media in imposing a subversive agenda of political correctness on the U.S. military services. The CFR military elites have been using radical feminism, LGBTQ perversion, racial-identity politics, ethnic affirmative action, and much more to destroy the finest and most important military in the world. They also have led a decades-long campaign selling perpetual U.S. military involvement in foreign no-win wars, as well as UN “police actions,” “peacekeeping,” and “nation-building,” the ultimate objective of which is to gradually transfer command and control of America’s armed forces to the UN and its subsidiaries.

However, on the positive side of the ledger we must note that the vast majority of individuals serving in our military services, both officers and enlisted, are loyal, patriotic Americans who remain wholeheartedly true to their oaths to “support and defend the Constitution of the United States against all enemies, foreign and domestic.” In addition, hundreds of America’s admirals and generals rebuked the CFR cabal by endorsing Donald Trump and opposing Joe Biden in 2020, while millions of retired and active members of the armed services enthusiastically supported and voted for President Trump.

We have come to a crossroads for America and the world unlike any before in history, and our military services will play a pivotal role against enemies foreign and domestic. We can and must do everything possible politically to oust the CFR’s uniformed globalists from their positions of power and expose the sellouts before they can turn our nation’s military against the American people.