My first session as your 4th District state representative ended on April 25, 105 days after it began on Jan. 11. I am honored and proud to serve as your state representative. It was a difficult session serving virtually. We made it work, but it was disappointing not having an opportunity to meet in person with constituents, colleagues, or hold actual public hearings and debate and vote on the House floor. The eye-to-eye contact and the sit-down conversations to discuss policy matters and ask questions was certainly missing.

There are a number of issues to update you on this session. In this end-of-session review I will touch on the three budgets and some of the major policy issues that will impact our communities and Washington state. Please let me know if you have any questions.

The $58.9 billion operating budget does some good things for the state of Washington. It includes priorities found in the House Republican operating budget framework such as the Working Families Tax Credit, replenishing the Unemployment Insurance Trust Fund, and long-term forest health.

However, I could not support the operating budget for the following reasons:

Lack of transparency: The operating budget was negotiated behind closed doors without Republicans in the room. The 1,102-page final spending plan was unveiled on the last Saturday of session, we voted on it the next day, and then we adjourned. This gave Republicans and the public only 24 hours to review it.

Taxes included: It unnecessarily increases taxes, including a new $100 surcharge on recorded documents and a new capital gains income tax. We have been fortunate our taxpayer revenues have been resilient through the pandemic, and a budget could have easily been drafted with the appropriate priorities and not raise taxes.

Unsustainable: It increases spending by $7 billion, or more than 13% over the previous biennium. Spending has increased 74% since 2013, and as you can see by the chart, our budget has nearly doubled since 2011. Our revenues have exceeded expectations through the pandemic, but many businesses and industries have a long way to go to recover and we still face a lot of economic uncertainty. This plan is not fiscally responsible.

I supported the $11.8 billion biennial transportation budget. It protects current projects and provides some funding for the maintenance and preservation needs of our transportation systems. It includes more than $1 billion in federal pandemic funds to go toward fish passage barrier removal and to backfill holes in the budget due to toll and fare reductions.

The Legislature passed a bipartisan capital budget, securing more than $16.8 million in funds for community projects and other infrastructure needs in the 4th District. These are taxpayer dollars coming at a time when your communities and economy need it as we come out of restrictions of the pandemic.

Projects in the 4th District include: 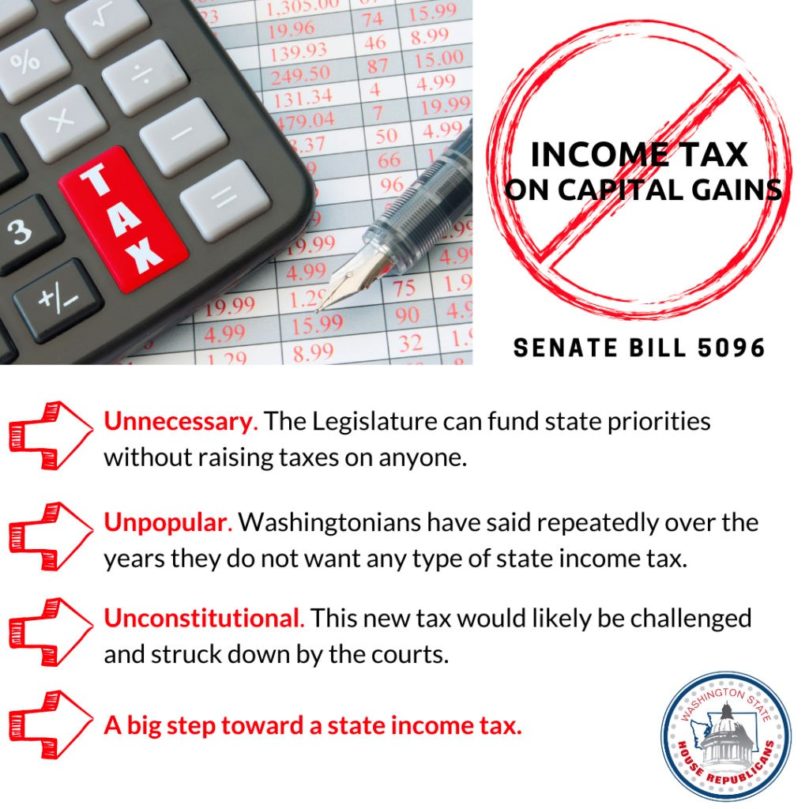 HB 1410, protecting taxpayers from home foreclosure. I co-sponsored this legislation, introduced by Rep. Mike Volz. It gives delinquent property taxpayers a chance to get caught up again by paying any amount at any time along with a 9% interest rate, instead of 12%.

The cap and trade, or “cap and tax” scheme, proposed by the governor, Senate Bill 5126, has been part of his climate change agenda for some time. Despite bipartisan opposition, the majority party passed the cap and tax bill in the last hours off the session.

We hear a lot about our regressive tax structure, but this is a regressive tax that will increase the cost of gas, food, goods, services, and heating on those who can least afford it, the low- and middle-income families. 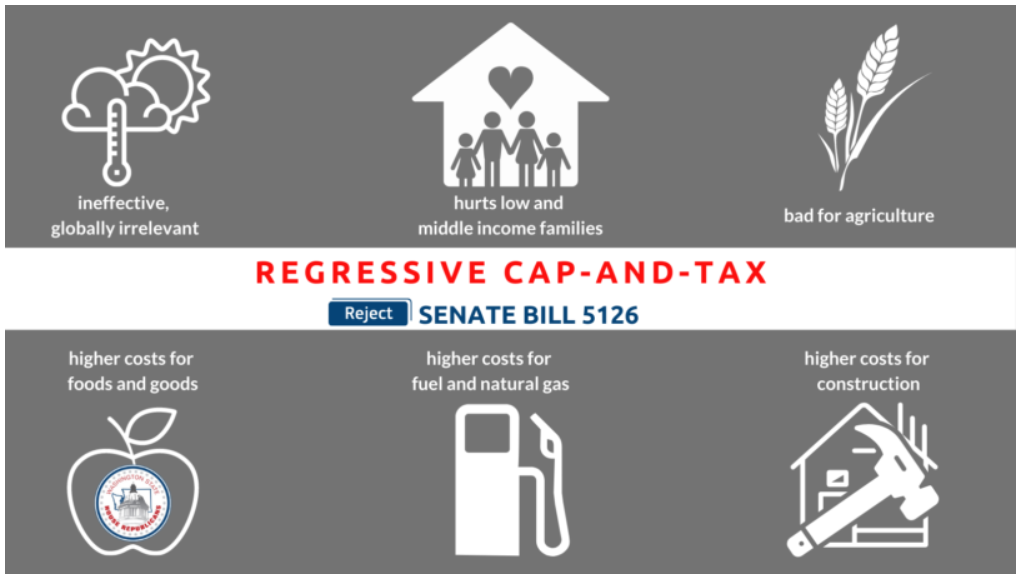 Another piece of the governor’s climate change agenda that passed on the last day of session, again with bipartisan opposition, was the LCFS mandate, House Bill 1091. The legislation authorizes the Department of Ecology to create a clean fuels program by rule to reduce the carbon intensity of transportation fuels. Once again, we have a state agency making the rules for a controversial and expensive program.

This mandate will increase the cost of gas and diesel without generating any new revenue for transportation projects, and do very little to improve air quality. This will also impact our low- and middle-income citizens, going against what the other side says regarding our regressive tax structure.

There continues to be talk of a potential gas tax increase with a transportation package in the near future. Add that to the costs associated with cap-and-tax and a low-carbon fuel standard, and folks could end up paying up to 55 cents more for a gallon of gas. 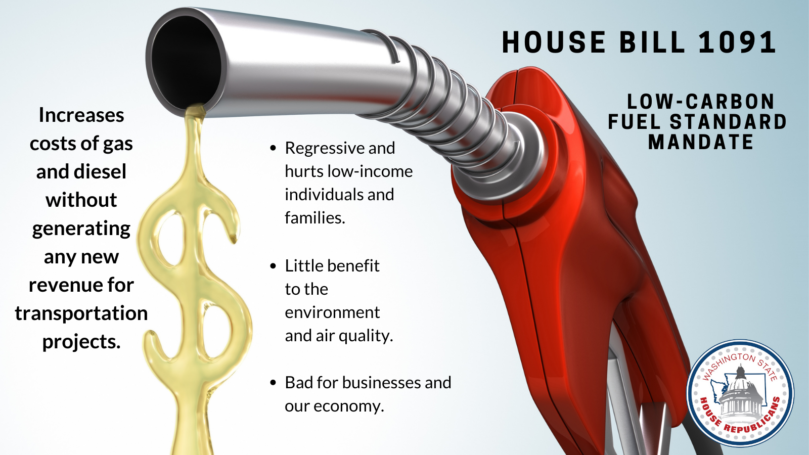 The governor has signed these bills into law, but vetoed provisions in both measures that tied the legislation’s taking effect to a transportation-funding package. He infuriated lawmakers with his actions. Legal challenges are already expected.

The Legislature adjourned without addressing one of the most pressing issues before us this session – emergency powers reform. Unfortunately, the majority party was not interested in addressing this issue.

One of the reasons they gave for voting down our efforts was that we were circumventing the rules or cutoff date to bring up the emergency powers bill we put forward. That would create an expectation that could be done for other legislation. However, the reality is, we had bills ready to go on the first day of session. If they truly wanted to address this issue, they had all session to do so, and work with us.

While the governor has advanced all counties to Phase 3, and we are on track to be fully reopened on June 30, what happens if there are any setbacks? We would once again be under one-person control. Our state government was not intended to operate in this manner.

Since we adjourned, some counties have become increasingly frustrated with Gov. Inslee’s actions. (See articles below.) More reasons that we should have addressed this issue during the session. Hopefully, we are moving forward and this won’t be an issue in the near future, but it still needs to be addressed – like many other states did during the pandemic.

In February, the state Supreme Court ruled (State v. Blake) Washington’s law prohibiting the simple possession of drugs is unconstitutional. The ruling meant thousands of convicted drug felons would be eligible for release into our communities.

To address the court’s decision, Republicans introduced five bills. Unfortunately, none were given a public hearing. An agreement was reached on Senate Bill 5476 late in the session, which makes simple drug possession a misdemeanor and funds development of a statewide framework for treatment and recovery. I could not support the bill. It does not address the problem and that was unacceptable to me. This is a public safety issue for our communities and our streets, as well as for those stuck in the cycle of drug abuse.

I am your state representative year-round, so please do not hesitate to contact me with any concerns, questions or issues you may be having related to state government. Your input helps me represent you. Please feel free to contact my office.

Also, you can keep track of state and legislative news even though the Legislature has adjourned. I have listed some websites/news services I encourage you to follow during the interim to keep up on what is happening with our state government.