The international organization that put Iran on their women’s rights commission and elected Venezuelan dictator Nicolas Maduro to their human rights council just got more repulsive.

The U.S. is giving them tons of money to come up with the most disgusting, amoral garbage.

The UN is devoid of all morality and common sense.

Obviously, this is indoctrination and it’s without any moral tenets whatsoever. Pornography can be very dangerous and evil. Certainly, it’s inappropriate for youth who haven’t even developed much in the way of abstract thought or adequate controls on behavior.

The UN is destroying the family, and this is one more nail in the coffin.

The report is entitled “Digital Age Assurance Tools and Children’s Rights Online across the Globe.”

With regard to pornography, it reviews the legislative proposals of some countries and cites some research that presents, over and above the data collected, different judgments on the issue, either totally negative or substantially lax, New Daily Compass reports.

The UN claims it’s worried that some things are classified as pornography and are not. Therefore, children are deprived of much-needed sex education, according to them.

The US faces a problem of over-sexualizing children, particularly in schools. We will pay a price.

Since there are serious implications to this, it should be addressed by parents, not potential perverts teaching it. We should not be subjugating our nation to these amoral misfits.

What’s next? Pedophilia? We have enough amorality with Hollywood. 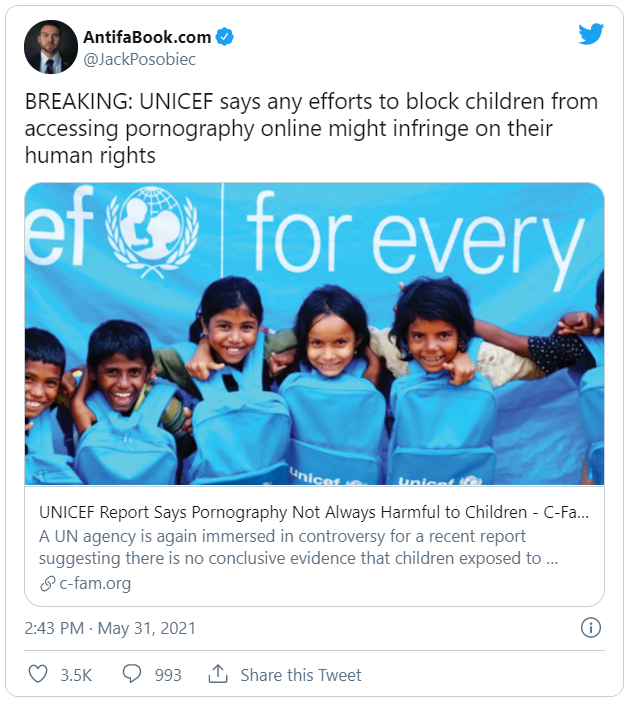