Scientist Discovers What May Cause COVID-19 Vaccine-Linked Blood Clots 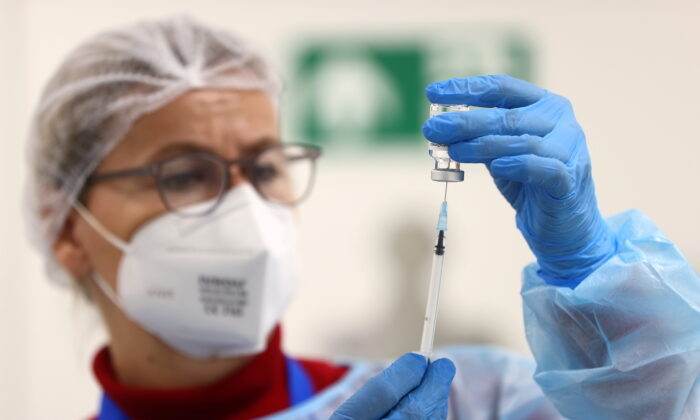 An AstraZeneca COVID-19 vaccine is prepared at the local vaccination center as the spread of the coronavirus (COVID-19) continues in Hagen, Germany, on March 19, 2021. (Kai Pfaffenbach/Reuters)

Scientist Discovers What May Cause COVID-19 Vaccine-Linked Blood Clots

A German team of researchers this week said they may have discovered what causes rare blood clots in some COVID-19 vaccine recipients.

Rolf Marschalek, a professor at Goethe University in Frankfurt who has been involved in studies looking into the rare clotting condition caused by the Oxford-AstraZeneca vaccine, said his researcher showed the issue may be triggered due to adenovirus vectors.

An adenovirus—a common cold virus that can’t replicate—is the primary mechanism used by both the AstraZeneca and Johnson & Johnson vaccines, delivering the genetic instructions for the spike protein of the virus into the recipient’s body. Meanwhile, vaccines made by Moderna and Pfizer use mRNA technology.

The German scientists led by Marschalek said in a research paper that hasn’t yet been peer-reviewed that the problem might be caused when the adenovirus enters the nucleus of the cell rather than the cellular fluid, where the virus makes proteins.

“The adenovirus life cycle includes the infection of cells … entry of the adenoviral DNA into the nucleus, and subsequently gene transcription by the host transcription machinery,” they wrote, reported The Guardian. “And exactly here lies the problem: the viral piece of DNA … is not optimized to be transcribed inside of the nucleus.”

Marschalek told The Financial Times that mRNA-based vaccines deliver the protein spike’s genetic material into the cell fluid, saying it never goes into the nucleus.

“When these … virus genes are in the nucleus they can create some problems,” Marschalek said. Vaccines using adenovirus, he added, can be redesigned to avoid the problem in the future.

Johnson & Johnson “is trying to optimize its vaccine now,” he told the Financial Times. “With the data we have in our hands we can tell the companies how to mutate these sequences, coding for the spike protein in a way that prevents unintended splice reactions.”

The German team has yet to speak with AstraZeneca about the problem, Marschalek said, adding that if they do reach out, I can tell them what to do to make a better vaccine.”

In Europe earlier this year, more than a dozen countries temporarily suspended usage of the AstraZeneca shot due to the blood clotting issue. Later, the European Union’s drug regulation body rescinded the suspension, although Denmark dropped using the vaccine altogether.

The U.S. Centers for Disease Control and Prevention (CDC) and Food and Drug Administration (FDA) later recommended a pause on using the J&J shot after reports of blood clots were found—typically in women. The agencies later ruled that the vaccine could be used.

But mRNA vaccines Pfizer and AstraZeneca are now being investigated by the CDC after some teenagers and young adults reported heart inflammation after getting the shot. Vaccines using mRNA use messenger ribonucleic acid (RNA) to create a protein that prompts an immune response within an individual.