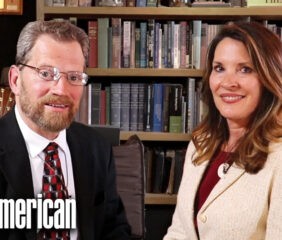 Idaho may be shaping up as the state to watch in the 2022 elections. Republican Governor Brad Little has now been put on notice that Lt. Governor Janice McGeachin, also a Republican, is gunning for his job. Governor Little’s lockdown response to the COVID “pandemic” has riled many Idahoans. Signs at anti-mask rallies make frequent reference to “Governor Chicken Little” or Brad “Chicken” Little. Ditto for letters to the editor, social-media posts, radio talk shows, and casual conversations. But Governor Little’s COVID overreach is not the only issue that has many Gem State Republicans fighting mad and ready for a change of governors.

Republican Lt. Governor Janice McGeachin has repeatedly locked horns with Gov. Little and is, at this point, the top contender for the 2022 gubernatorial race. Little has not yet officially announced his intentions, but he is expected to run again.

In a state where Donald Trump won 59.25 percent of the vote in 2016 (to Hillary Clinton’s 27.48 percent and 63.89 percent of the vote in 2020 to Joe Biden’s 33.09 percent), McGeachin stands a good chance of unseating Little. McGeachin served as the First Vice Chair for the Trump Idaho Team and was also a Delegate to the 2016 Republican National Convention. In 2020, she was one of Idaho’s four electors to the Electoral College, all four of whom cast their votes for Donald Trump.

On May 19, Lt. Governor McGeachin announced her gubernatorial bid at three press conferences, in Idaho Falls, Boise, and Coeur d’Alene. The New American was on hand for her announcement rally at the Candlelight Christian Fellowship Church in Coeur d’Alene, where we interviewed her following the event.

In a letter entitled, “I am running for Idaho Governor!” posted on her campaign website on May 19, Lt. Gov. McGeachin states: “Idahoans have witnessed some serious, egregious actions over this past year. We saw repeated attacks on our constitutional, republican form of government. Fortunately, many of us are aware of what should have happened differently.”

“Last year,” she continued, “the Governor declared that some of your businesses and your employees were not essential. This proved to be very divisive and destructive and created widespread unemployment. I am here to tell you that every life is essential and every job is essential. God has created each of us in His image and we each have a unique place in life.”

She continued to throw down the gauntlet to Gov. Little, without mentioning him by name. Her letter states:

Over the last year, we have been tested. Many stood strong in the face of challenges. Unfortunately, some who were entrusted with positions of leadership caved to fear and compromised principles. We cannot forget these violations of our individual rights, our state sovereignty, and our traditional conservative values.

Everything that Makes America Great is under assault, and with radical leftists now controlling Congress and the White House, your Governor must be on the front lines every day defending our individual rights, state sovereignty, and our traditional conservative values.

Anything less is dereliction of duty.

Lt. Governor McGeachin and Governor Little are both serving their first terms in their respective offices. Little served two previous terms as lieutenant governor (2009-19) and four terms in the state senate (2001-09). Lt. Gov. McGeachin served five terms as a State Representative (2002-12), then left office to resume family and business pursuits. McGeachin and her husband, Jim, operate automotive businesses in Idaho Falls and Boise, as well as Idaho Fall’s only Irish restaurant, the Celt Pub & Grill. McGeachin is Idaho’s first woman lieutenant governor and says she intends to be Idaho’s first woman governor.

McGeachin has a proven record of being staunchly pro-life, pro-gun, pro-property rights, pro-parental rights, and pro-fiscal responsibility. So, few are surprised that Lt. Gov. McGeachin was being attacked by the media as a “far-right” extremist right out of the starting gate. “Far-right Idaho lieutenant governor McGeachin announces bid to unseat Little as governor,” was a headline for a story in the Spokesman-Review, which covers northern Idaho from nearby Spokane, Washington. The Daily Kos carried this headline: “Idaho’s conservative governor not crazy enough, so his far-right lieut. Governor is challenging him.”  Much of the Idaho corporate media has followed suit.

These media brickbats are nothing new to the lieutenant governor; she has been the recipient of a steady barrage of the same since assuming office. But McGeachin is undeterred, confident that, like Trump, she will overcome the media bias with Idaho’s conservative voters.

“Put simply,” says McGeachin, “the status quo has got to go. Idahoans are tired of being ignored, shut out of the process, declared non-essential, and discriminated against by the state. Lobbying groups and special interests exercise too far much power in Boise. Cronyism will have no place in a McGeachin Administration.”