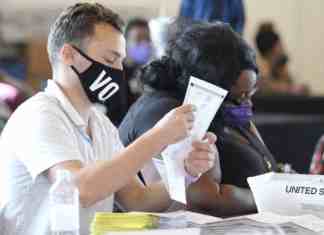 A small group of plaintiffs in an ongoing lawsuit concerning the election and ballot tabulation in Fulton County, Atlanta, Georgia scored with one Georgia judge. Since Fulton is a hotbed of corruption, it’s a big deal.

It is ground zero in the election fraud inquiry.

The state and local officials had been denying access to the physical ballots, only permitting a review of low-resolution scanned images.

If everything is legit, why?

People should know that many of the volunteers counting the ballots were Black Lives Matter agitators. How do members of a violent communist hate group get to count ballots?

An expert testified a disparity of approximately 21% of those “low resolution” absentee ballot batches from the state report to what the auditors were able to see.  A large number of the scanned ballots appear to have been counted twice.

The only way to find out the truth is to look at the physical ballots.

On Friday, a Georgia judge agreed to allow the plaintiffs to review the physical ballots. The process details are undecided.  The custody of the ballots will remain under the control of the Fulton County election officials, but the auditors will be permitted access to them.

There are 145,000 specific Fulton County absentee ballots in question.

Some ballots came from China.

We should know once and for all. There is nothing wrong with people having questions about an election that appears corrupt with laws and rules changed at the last minute to favor of demented Joe. Especially concerning are the mail-in ballots the drop boxes without a chain of custody.