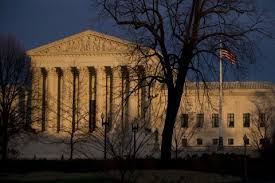 HAS THE SUPREME COURT MADE A FATAL MISTAKE?

Let’s start with a simple question – if one of the key principles of a constitutional republic is checks and balances between the three branches of government, how is the Supreme Court checked?

I hope you learned in your civics classes that one of the most feared branches of government in England, before the revolution in our country, was the courts. Why? Because they were “courts of equity”, meaning they were free to make “equitable” or individual decisions based on what the court thought would be equitable in a particular case, so there was no stable, constant law applied to all cases of a similar nature. Maybe this will provide more context when today you read that the courts want to make a shift from “equality” to “equity”, perhaps giving them more power and allowing them an excuse not to treat people in like circumstances the same, a denial of equal protection?

In addition, the English Crown could put a person under oath in court in a room with stars on the ceiling, called the Star Chamber, and force that person to answer questions. That method was used to ferret out Puritans, enemies of the king’s religion (the Church of England), and was responsible for the 5th Amendment right not to testify against yourself in our Constitution. Perhaps that is why our founders wanted a lesser role for the courts – only to issue opinions to be considered by the people who were to govern themselves through their elected representatives.

It bears repeating that the three branches of the federal government are the legislative (Congress), the executive (President), and the judicial (Supreme Court).

The legislative body is supposed to make the law in accordance with what the electors want their representatives to enact in language that they can understand in order to bring about a “well-ordered society”.

The executive branch, the president, is supposed to carry out the laws enacted by Congress. Who created the right for the executive to rule by executive orders (fiat), which is in effect making law without legislative action? Why have we allowed it?

The judicial branch (Supreme Court) is supposed to render opinions on the cases brought before it regarding whether a questioned law is constitutional after considering if it is in conflict with a provision of the supreme law of the land – the Constitution.

It is clear that the legislature, Congress, can check and balance the president by passing a change to the law if not carried out correctly according to its wishes and the president can veto a law he/she doesn’t approve of, which of course can be overridden by Congress, but how does either branch check the power of the Supreme Court?

The simple answer is that no one has to accept the Court’s opinion because it is only an opinion and the members of the Court were never elected to represent the people. Otherwise, how could the form of government be called a republic?

This gives rise to the question, “don’t people have to obey a decision of the Court or it will be enforced against them”? The answer is no, because the Court has no enforcement authority. Furthermore, its opinion is not the law of the land. Art VI of the Constitution provides: “The Constitution, and the Laws of the United States which shall be made in Pursuance thereof, and all Treaties … shall be the supreme Law of the Land….” You will notice that Supreme Court opinions/decisions are not included in that language. As Justice Antonin Scalia once famously stated in an opinion “Words matter”.

To remind you of your civics classes, the enforcement authority of the federal government is the US Marshall’s office which is under the executive branch (President) in order to provide a check and balance. How then has the Court had the ability, through its misinterpretation of the words and phrases of the Constitution, or actually making up words and phrases to justify its opinions, to govern our lives by deciding social issues for us, outside our representative form government? Because we have allowed it.

Regardless of how you feel about the issues themselves, how did the Court decide that the public without a vote or action taken by a legislative body couldn’t control obscenity, couldn’t impose the death penalty on offenders for the rape of women, could make the imposition of the death penalty so difficult that it is rarely carried out eliminating whatever deterrent effect it might have, couldn’t be allowed to sentence anyone under the age of 18 to life without parole, could mandate marriage for same sex couples, all by stretching the due process and equal protection clauses of the 14th Amendment? Wasn’t that amendment only enacted to place the Civil Rights Act of 1866 in the Constitution to allow newly freed African-Americans the same rights as White Americans? Wouldn’t a reasonable constitutional reader think it should be limited to the purpose for which it was intended? Were any of those issues voted upon in our “representative government”? Of course not. Then why have we allowed it?

What can be done? Is there any hope for a return to a constitutional republic with the citizens deciding through our elected representatives in Washington D.C. how we should be governed by the federal government? Remember we are a nation of states that banded together to form the United States of America. Or, the question should be asked, should we rename the country the Federalized States of America?

What is clear, because of the way the branches were structured, is that the Court was to issue its thinking to be considered by the public and if they agreed with the Court they could cause their elected representatives to carry it out with legislation, otherwise it could be disregarded. Today, some are calling this nullification.

Finally, the supreme mistake was made by the Court on a date to be remembered forever in history – December 20, 2020. On that date in the case of Texas v. Pennsylvania et.al. The Court refused to hear a challenge by the state of Texas of the action taken by several states in violation of the Constitution by allowing non-legislative bodies to change the election procedures in their respective states. The Court stated: “Texas has not demonstrated a judicially cognizable interest in the manner in which another State conducts its elections”. Because the Court refused to hear such a case and dismissed one of the states of the Union on the basis it lacked “standing”, there is no longer a reason for the Court to exist with its present structure and supposed importance. There is nothing more important to a republic than whether an election has been conducted in accordance with the provisions of the contract, the Constitution, under which it was established. As a result of the action of the Court, the question must be asked “was the presidential election process in 2020 valid?” The plain answer is of course no, how could it be?

A mistake remains a mistake until corrected.