After 100 days in Office, Biden Struggles in Obama’s Old Shoes 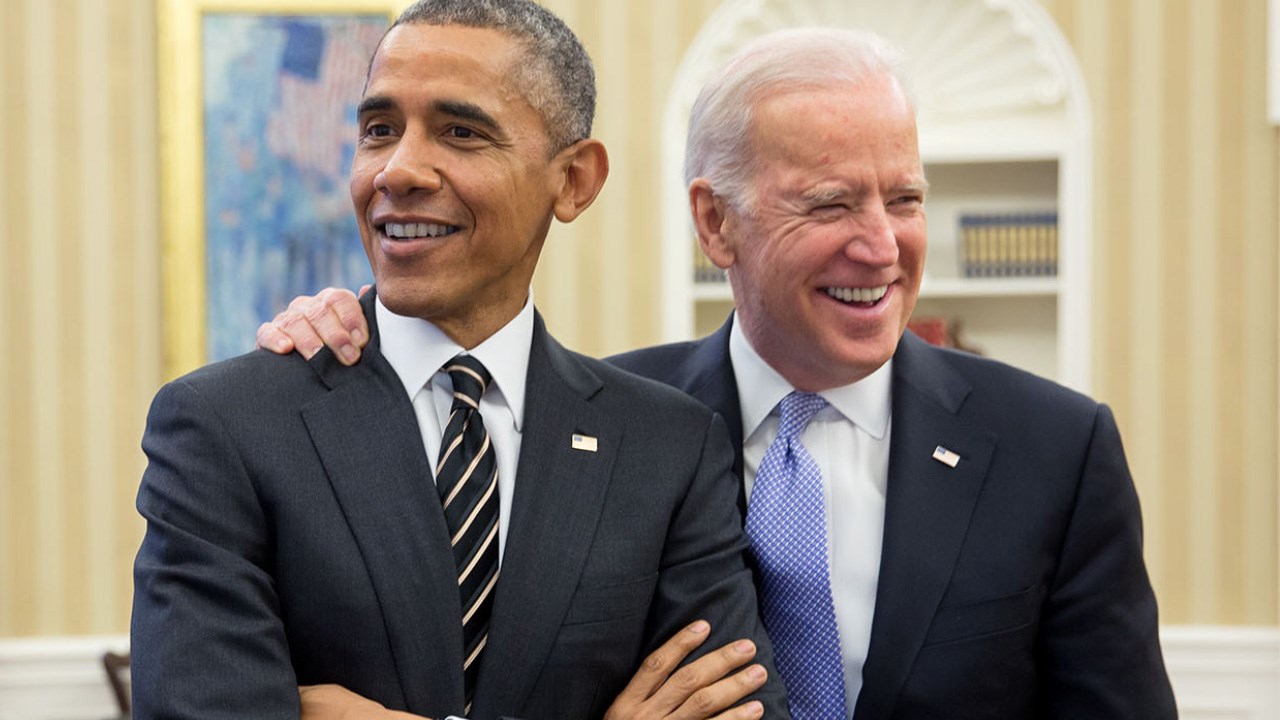 After 100 days in Office, Biden Struggles in Obama’s Old Shoes

The new administration is basically Obama retreads plus a battery of Big Tech operatives. Their plans will fail, writes a longtime diplomat.

Since the outset, the ‘Biden One’ administration was slated to become an ‘Obama Three’ one. In 100 days, this profile got confirmed. For his first steps at the head of the world’s leading power, Joe Biden has simulated changes in the course from the political, social and economic paradigms of previous administrations. He owes his few successes so far on sustaining the economy and other issues to the administration of his predecessor, President Donald Trump.

According to Dems’ supporters, though, Biden is the new strong man in town. Seriously? After some 36 years in the Senate and 8 years as Vice-President of Obama, who could ever believe it. Also, Biden persistently focuses on dumbfounding the American people with “innovative” and expensive social programs and policies crafted by his new team of experts. Let’s take a closer look at how new his team is.

The problems for Joe Biden started with the complex and divisive liberal coalition that came into power in the United States on January 20, 2021. The differences of opinion among its factions about the issue of power in America and especially abroad are yet to be resolved. The split in the ruling establishment began shortly after his election and the balance of power in Washington is now clear-cut with its political contradictions and subsequent limitations to presidential authority.

The Democrats with their disciplined obeisance to the party during the last presidential elections and their collusion with the internet giants and with the mainstream press, created a false impression of a solid and concurring coalition. Contrary to this misconception, the main stumbling block for Democrats is, once again, U.S. foreign policy. This is why, there is still no clarity about it, as factions strive for influence over the decision-making processes within the current administration.

Historically, with the exception of the war in Yugoslavia launched by President Clinton, the Democratic Party was betting on its image as an anti-war party. But not all Democrats were happy to play with the hens when falcons were flying higher. Some of them wanted to prove that Dems are as keen as Republicans to embrace neoconservative attitudes such as the aggressive spread of “democracy” and the obligation to interfere in other countries’ internal affairs in order to protect the American interests, rights and values.

After the loss by Al Gore of the 2000 election, a new generation of politicians emerged. The American political historian James Mann wrote that the Aspen Group was one of the most active foreign policy groups at that time. He noted: “They were anxious to show that the Democrats were not a bunch of pacifists, that they understood what national security meant and that they were prepared to use military force if necessary.”

Among the Aspen Group members, three deserve our special attention – Antony Blinken, Thomas E. Donilon and Kurt M. Campbell. For the time being, only Donilon has not been appointed in Joe Biden’s administration. He was, however, on the short list of candidates for the CIA director’s position, but lost to William Burns. Blinken and Campbell took right away the highest possible positions, respectively, Secretary of State, and of the U.S. Asian policy at the National Security Council.

Tony Blinken, upon entering the Obama administration, was first member of the National Security Council, covering the U.S. Middle East policy. He strongly supported Secretary Clinton in her aspiration to participate in the aggression against Libya and was among those who developed a strategy to overthrow Bashar al-Assad, the Syrian dictator. The disaster of the Western coalition in Libya put a premature end to the Syrian adventure. Blinken was then transferred to the State Department.

Blinken and Campbell are nowadays in command of the U.S. policy that aims at containing China. Both shaped their thinking under Obama, when the China dilemma was felt strongly in Washington. Still, the Obama administration failed completely to strengthen Asian alliances, to increase trade and raise its regional military profile, which was the Barack Obama so-called rebalance or pivot to Asia, in a totally naïve bid to channel China’s ambitions peacefully.

Obama’s historical impotence in dealing with China has intensified questions about the qualifications of the members of the current administration. The same people are now in charge to face the threats and challenges related to the rising nationalism in China. Its communist leaders are less and less willing to have their ambitions curbed or contained and they will keep working ruthlessly to push the U.S. to the world number two spot.

Obviously, the speed of the two juggernauts superpowers, which have been on a collision course for some years now, is rapidly increasing. It’s unlikely that, advised by such incompetent high officials, President Biden will have the cognitive capabilities and the strategic and political savviness to prevent the pile-up in a winning position.

Hillary Clinton is another big fish in the democratic pond. Ever since she lost the 2016 election, her efforts to play a significant role within the party slowly evaporated and the new liberal coalition was assembled in 2020 without her determining involvement. There was a reason. The reputation of the Clinton family was seriously affected last year by the scandal about the alleged relations between Bill Clinton and the convicted pedophile Jeffrey Epstein. Hillary knew that Bill’s relationship with Epstein was much closer than he would publicly admit ever. This ended the fascination with the couple since the 1990s.

The circles of influence in the Democratic Party are complex. One of the most striking examples is the Kennedy clan. One generally has to be a Catholic of Irish descent to be a member. The designated leaders after the demise of Senator Edward Kennedy were Joe Biden and John Kerry. Thanks to the corrupt business projects of the Dems golden boys, headed by Hunter Biden and Kerry’s adopted son Christopher Heinz, the son of the Speaker of the House of Representatives, John Pelosi Jr., also became a member of the clan.

In analyzing the team of President Biden, another important element comes to the fore. It is the bias in favor of Democrats by the major private technology companies. It is now well known that big Internet firms did their utmost in order to ensure that the Democratic Party would win the 2020 election. Of course, they were not the only ones – the mainstream media, the intelligence community, the U.S. Postal Service, some Democratic governors and the Antifa street activists joined forces in this effort. But by far, the most influential lobbying group behind the Biden’s election of November 2020, were the Big Tech teams.

The big digital corporations control the change of power in Washington. They also control fluctuations in the policies of the current administration that could lead to decrease of their political influence, to public scrutiny of their activities and/or to dismantling of their profitable monopoly. That’s why, dozens of corporate watchdogs have been sent to the White House and federal agencies in top positions.

To begin with, Biden’s Chief of staff, Ronald Alan Klain, who was also previously Chief of staff to two Vice Presidents, Al Gore from 1995 to 1999, and Biden from 2009 to 2011. Ron Klain is one of the Internet industry’s most famous and influential lobbyists. When digital corporations need something in Washington, they simply call Klein.

Another iconic figure is Jessica Hertz, the White House Staff Secretary. No meaningful dispatch, electronic or paper, can be processed without her prior approval. The internal correspondence of the U.S. government is in her hands. She worked in the Obama administration until 2014 and then served as associate general counsel at Facebook.

President Biden has appointed more than three dozen Big Tech representatives in his administration. They used to hold top positions in the tech corporations, and now work at the highest level of the U.S. government. For instance, Emily Horn, a former Twitter senior staffer, got a position in the President’s Security Committee; Zaid Zaid, a strategist at Facebook, now works for the State Department, and Jeffrey Zients, a former Facebook board member is now in charge of setting the public policy for the administration of Biden in fighting the COVID-19 pandemic.

Another big catch is Mark Schwartz, who worked as a top manager at Amazon Web Services and has moved to the White House Department of Management and Budget. There is also Deon Scott, who was working with Google as global programs manager and who now operates as one of the deputies at the Department of Homeland Security.

The American people have the right to be informed about the Big Tech invasion of their government, which is less and less credible. Such a massive overflow of Internet firms’ representatives into the Biden administration is further jeopardizing their freedoms, since the digital watchdogs are unlikely to have a strong interest in most of the basic domestic or foreign policy issues. However, they will carefully screen 24/7 the strategic U.S. decision-making processes so as to preserve the interests of Google, Amazon, Facebook, Twitter, and others, so that no individual in the U.S.A. or any country in the world, would ever dare to hope for digital freedom or sovereignty.

The men from the Big Tech industry are therefore the real new factor in Washington. The other members of the Biden team are the good old Obama-boomers who failed pitiably under his leadership, but despite all dogmatic fiascos, still have the ambition today to lead the world and to impose economic and political parameters affecting the freedoms of the American nation. It will not work out. These Democratic tactics seldom pay off. And it would be insane for President Biden to hope that repeating the same errors with the same people will bring a different result.

Don Alltoada is an international expert in economics and political sciences with extensive experience in multilateral diplomacy. As a member of several think thanks in Europe and in the USA, he is currently working on disclosing corruption schemes and promoting effective enforcement of the rule of law.