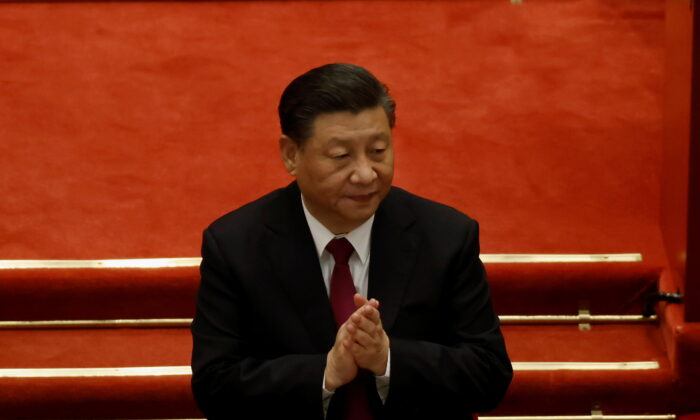 Chinese leader Xi Jinping applauds at the closing session of the Chinese People’s Political Consultative Conference (CPPCC) at the Great Hall of the People in Beijing, China, on March 10, 2021. (Carlos Garcia Rawlins/Reuters)

Chinese leader Xi Jinping claimed the main character of the present world is a “chaos” that has been unseen in the past hundred years, and the current timing and circumstances in the world all favor China and can help the Chinese Communist Party (CCP) to reach its goal—to dominate the world.

Xi explained that the chaos was created by the COVID-19 pandemic. Xi didn’t say clearly how China has the favorable situation, but he delivered the message that China has curbed the outbreak successfully while the majority of countries in the world have been damaged and are suffering badly from the pandemic. He reasoned that this is why China holds the favorable situation.

“In response to the global pandemic of the novel coronavirus, it shows immediately which country’s leadership and political system is good,” Xi said.

This is the first time that Xi made his “self-confidence” public, which echoed recent words from other Chinese officials. Chinese officials are proud that the pandemic started in China, but left China.

Chen Yixin, secretary-general of the Chinese Central Political and Legal Committee, told staff members of the committee in Beijing on Jan. 10: “In today’s world, China’s good order is in sharp contrast with the West’s turmoil. Socialism with Chinese characteristics has an unprecedented vitality.”

“The East is rising and the West is declining,” He Bin, the CCP boss of Qilian county in northwestern China’s Qinghai Province, said quoting Xi when he spoke with officials from the county on Feb. 25.

People line up to be vaccinated against the COVID-19, outside a residential compound in Beijing on April 8, 2021. (Leo Ramirez/AFP via Getty Images) 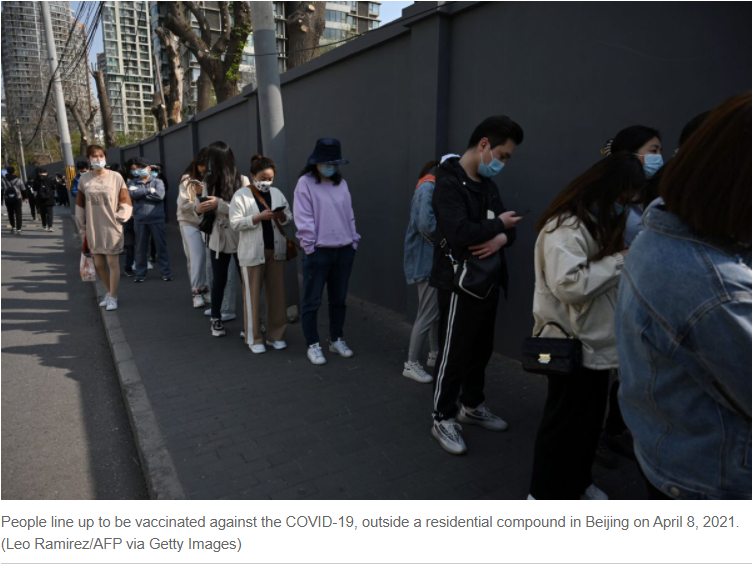 Xi’s ambitious speech was delivered to all provincial or higher-ranking officials at a seminar in Beijing on Jan. 11, and was first published in the state-run magazine Qiushi on April 30.

The core of this over 11,000 words’ speech is that Xi taught the regime to grab the chance of the chaotic world, and realize the CCP’s strategic target—the “Two Centenaries.” Xi said he believed the CCP owns “the [world’s] timing and situation. This is why we are unmoved and emboldened, and [it is] the foundation of our determination and confidence.”

In the speech, Xi explained where his “Chinese self-confidence” comes from.

Day laborers hold signs advertising their skills as they wait to get hired for renovation works in Shenyang, China on March 27, 2020. (STR/AFP via Getty Images)

He then talked about the world’s circumstances. 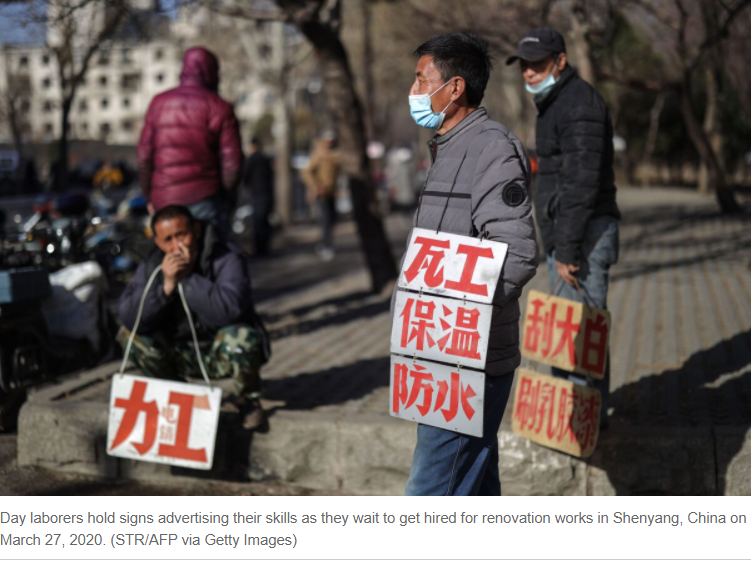 Since 2019, the CCP virus, commonly known as the novel coronavirus that causes COVID-19, has intervened in the global order and damaged the global economy. This pandemic created “unprecedented big opportunities and challenges” for China, Xi said. “In general, the opportunities are bigger than the challenges.”

To grab the opportunities, Xi asked all CCP members to “use all positive factors that we can motivate, unify all forces that we can reach, try our best to do the job well, and with perseverance to achieve our set goals.”

After a lot of theoretical content and Marxist ideologies, Xi reiterated and explained his “double circulation” economic development.

A group of female protestors demand safe passage home for their relatives, who are missing, jailed or trapped in China’s Xinjiang region outside the Chinese consulate in Almaty, Kazakhstan on March 9, 2021. (Abduaziz Madyrovi/AFP via Getty Images) 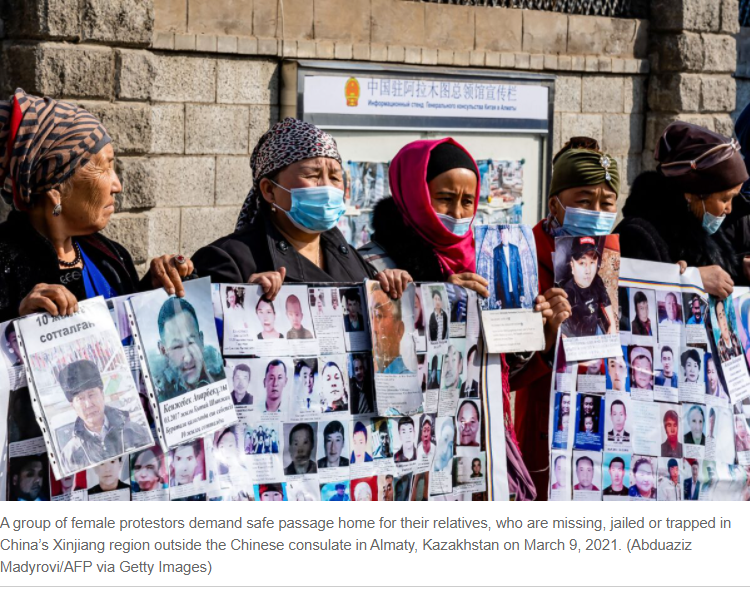 In this January speech, Xi gave more details of the double circulation.

“In recent years, the global economy has been anti-globalized, and the international economic cycle pattern has undergone in-depth adjustments. The COVID-19 pandemic intensified the trend of anti-globalization, and every country is more taking care of themselves,” Xi said.

Xi said he visited eastern China’s Zhejiang, a province that relies on exporting, from the end of March to early April in 2020 and saw local factories couldn’t import raw materials from overseas nor export goods due to the pandemic, which caused a large number of factories to stop production or even close.

As Xi said, China is the world’s largest foreign trade country and the Chinese economy relies on exports. The pandemic damaged other countries’ economies that then cut off imports. Consequently, China lost its economic pillar—foreign trade.

Xi Jinping’s “internal circulation” is a method for the Chinese economy to survive.

However, the majority of Chinese people are poor and China’s domestic purchasing power is weak. Xi has to emphasize the “external circulation,” which is the pillar to support the Chinese economy.

A street vendor waits for customers on the roadside outside a shopping mall in Beijing, China on June 10, 2020. (Greg Baker/AFP via Getty Images) 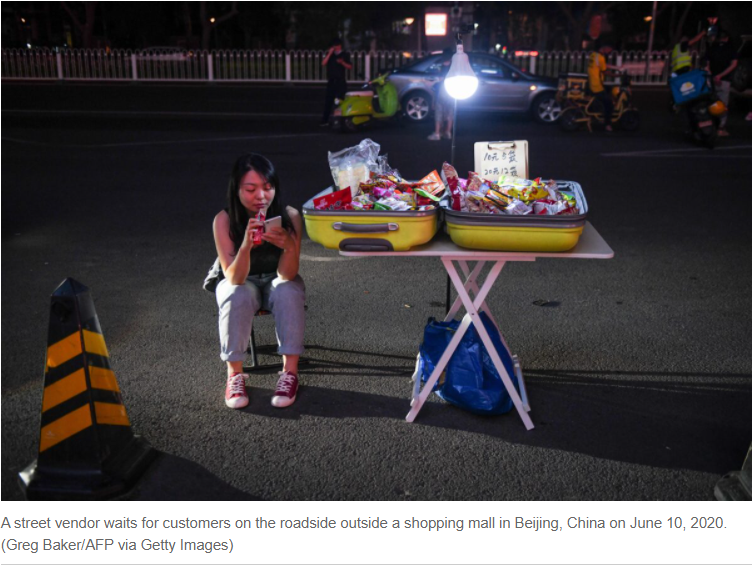 In the speech, Xi said: “We must perform a deep level opening to the foreign market … improve the efficacy and technology level of internal circulation by adopting the standards of external circulation … increase the competitiveness of our exported products and services … enhance our influence in the global industrial chain, supply chain, and innovation chain.”

In fact, Xi knows the weaknesses of the Chinese economy, as well as the political system.

He said in the speech: “China’s labor cost has kept on increasing. China’s resources and the environment’s carrying capacity have reached a bottleneck,” meaning they have reached their limit and can’t support more.