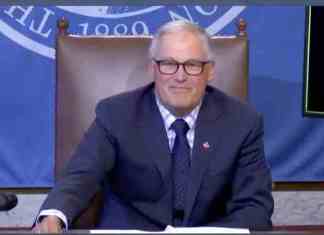 “The legislature plans to continue the important work of dismantling institutional racism in public schools and recognizes the importance of increasing equity, diversity, inclusion, antiracism, and cultural competency training throughout the entire public school system….”

The speed at which this evil anti-American program, Critical Race Theory, is infiltrating our school systems, businesses, and the government is terrifying. It will destroy the nation. The fact that the program will destroy young minds is the most devastating aspect of this.

Voting in dictatorial, foolish, and corrupt politicians comes with a cost. Take Washington State for example.

On May 5, Governor Jay Inslee of Washington signed Senate Bill 5044 into law, which requires Critical Race Theory (CRT) training for all school staff, board directors, teachers, and administrators in public schools across the state.

Engrossed Substitute Senate Bill 5044 is a K-12 monstrosity. Everyone working with children is to be trained in this racist program that sees everything through a prism of race.

While claiming they are dismantling institutional racism, they are actually incorporating systemic racism against whites into our schools.

The Washington state school directors’ association is responsible for embedding CRT throughout the standards and makes it the focus of the educational program.

This follows Inslee’s approval of Senate Bills 5227 and 5228, which requires public colleges and medical schools, respectively, to develop a CRT curriculum. SB 5228 claims to tackle “structural racism in healthcare.”

The Washington Policy Center, a free-market think tank, reviewed the trio of bills and found many troubling elements:

At public hearings, lawmakers received the following analysis about these bills.

This reduces all that we are to a most unimportant feature — the color of our skin.

Washington joins several states that have mandated CRT in public education. According to Joy Pullmann, writing in The Federalist:

Oklahoma, Idaho, Tennessee, and Florida are among the states banning or considering banning CRT altogether in public schools.

With states going in opposite directions and the Biden administration promising to create federal mandates for CRT in public schools, the war for control over public education in America seems poised to escalate.