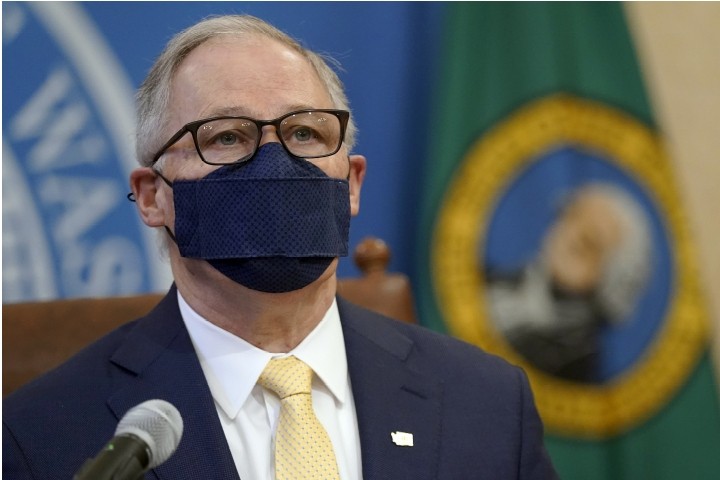 Ruling with an iron fist even the Democrats are resisting, Washington Governor Jay Inslee, a Democrat, announced on Tuesday a “two-week pause” that will keep all counties in the state in their current reopening phase. In accordance with his Healthy Washington — Roadmap to Recovery Plan, which, in early March, transitioned the state’s COVID reopening plan from a regional to a county approach, individual counties must pass an “evaluation” (every three weeks) in order to move on to the next phase of reopening.

“We are at the intersection of progress and failure, and we cannot veer from the path of progress,” said Inslee during a press conference. “Our economy is beginning to show early signs of growth … and we know vaccines are the ticket to further reopening  —  if we adhere to public health until enough people are vaccinated.”

According to Washington’s health department, the recent leveling off of “COVID’s fourth wave” has been largely attributed to Inslee’s “early vaccine prioritization.” All Washingtonians, age 16 and up, are “encouraged” to get the shot, which has been available to them since April 15.

Inslee’s implementation of a two-week pause has enraged Democrats in Pierce County — currently in Phase 2, the second-most restrictive phase, which requires a reduced capacity of 25 percent for indoor dining and gyms. Moving to Phase 3 permits these businesses to operate at 50 percent capacity.

With Pierce County stuck in a phase with tighter COVID restrictions, both Democrats and Republicans in the area are threatening to call a special legislative session. In a letter to the governor sent Thursday afternoon, eight House and Senate Democrats, joined by four House Republicans, wrote that Inslee’s “Failure to [reconsider his plan] will require us to consider asking our leadership to exercise the Legislature’s authority to call a special session and weigh legislative options.”

Per the Seattle Times, the letter explains that “the decision to pause Pierce and three other counties with more restrictions while allowing counties that were set to roll back to continue to have more business activity ‘damages both our confidence and communities.’” It continues, “Suspending any change in county status for two weeks notwithstanding these metrics changes a set of rules that have consistently guided reopening decisions and protected the public over the last few months.”

Inslee rebuked Pierce County officials in response, saying the county has not been treated unfairly.

Recalling how the Democrats “voted against efforts to reform Inslee’s emergency powers during the recent legislative session that ended April 25,” House Republican leader J.T. Wilcox, in a statement on Wednesday, suggested “the lesson we all take from this is there should always be legislative oversight on emergency powers.”

The Seattle Times further reported that on Thursday, the Washington Hospitality Association drew up a petition to reopen the state fully on June 15, following California’s lead. The paper noted that other blue states, such as New York and New Jersey, have set a tentative full reopening date of May 19. Yet after more than a year of lockdowns, Washington’s third-term governor refuses to offer a date for when his state will operate normally.

News of the reopening “pause” follows Inslee’s announcement on Monday that spectator events and religious and faith-based organization facilities may increase capacity by adding sections for vaccinated attendees.

Joining New York’s Andrew Cuomo, Inslee is among the first governors to separate citizens based on vaccination status.

According to the governor’s office, proof of vaccination permitting more Washingtonians to attend certain events and gatherings includes a “vaccination card (requiring the name of person vaccinated, type of vaccine provided, and date last dose administered); a photo of a vaccination card as a separate document; a photo of the attendee’s vaccine card stored on a phone or electronic device; documentation of vaccination from a healthcare provider, electronic health record, or state Immunization Information System record.”

Note: “Self-reported vaccination records that are not verified by a health care provider will not be accepted.”

The order to allow indoor and outdoor facilities to operate at a 50 percent capacity, as long as counties maintain the guidelines for vaccinated sections at “sporting events, graduations, religious services, and other similar activities,” is effective immediately. The guidelines are as follows:

Perhaps to soften the blow of his failed bid for the presidency in the 2020 election, Governor Inslee has felt the need to extend immense overreach and abuse of power in his state. Will Washingtonians stand against him? So far, he’s convinced they will comply.

Annalisa Pesek is a writer, editor, and librarian. She joins The New American after spending nearly a decade in New York publishing.